Sergio Martinez suffered a broken hand last night in his win over Martin Murray, and promoter Lou DiBella tweeted a photo of Martinez in a cast today.

As reported last night, Sergio Martinez suffered a broken hand in his close win over Martin Murray in Argentina. Today, promoter Lou DiBella tweeted a photo of Martinez in a cast: 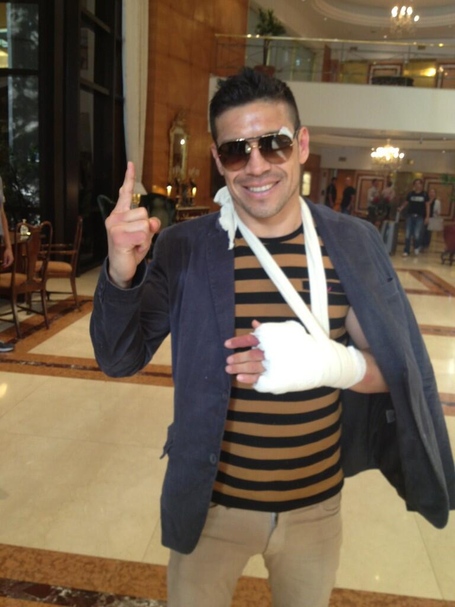 Martinez (51-2-2, 28 KO) is reportedly highly unlikely to fight again this year, and DiBella says they saw a specialist today, which "confirmed what they thought." The 38-year-old Martinez had to have knee surgery after his last fight, and it seems to many that his body is simply breaking down on him. He's had a lot of nagging injuries over his boxing career, and before that, too, when he was pursuing a football career.

If Martinez doesn't fight again this year, the outlook for next year and beyond isn't great. He's at the age where fighters his style usually start to lose what makes them special to begin with, and when you add in injury and time out of the gym, he's officially endangered as an elite fighter, I believe.