Steve Cunningham held an open workout on April 3rd for media to cover his April 20th fight preparations for Tyson Fury, which will be televised live by NBC. Bad Left Hook's Ryan Bivins was live to report.

PHILADELPHIA - Steve "USS" Cunningham held an open media workout at the Rock Ministries Gym in Philadelphia. With a little more than two weeks remaining until the fight, Cunningham, 25-2, 12 KOs, appeared confident, conditioned, and ready to fight Irish import Tyson Fury, 20-0, 14 KOs, a 6' 9" rising star of the heavyweight division. Cunningham went through a light workout for the press before speaking about the upcoming nationally televised fight at The Theater at Madison Square Garden scheduled for Saturday afternoon, April 20th. The Fury - Cunningham battle will be the main event of the 4PM ET broadcast on NBC.

Cunningham had the following to say, concerning Fury's trash talking during a press conference last month and how he plans to make him pay for it:

He wants to get under my skin with his antics, imitating Ali, doing all these tricks. He wants me to just come in and punch him in the mouth, but I will stick to the game plan and not get out of control. It's all about the game plan.

We're getting ready for the best Tyson Fury that the world has ever seen. He can say what he wants to say. It's only going to make him look bad when he gets beaten by a supposed light heavyweight. 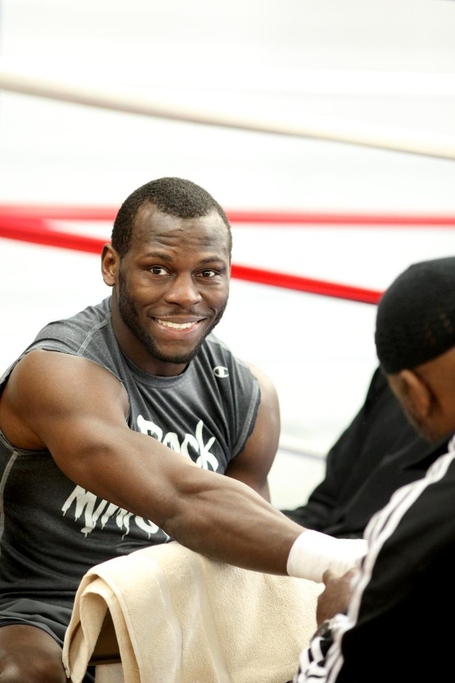 Cunningham smiles for the camera as he gets his hands wrapped 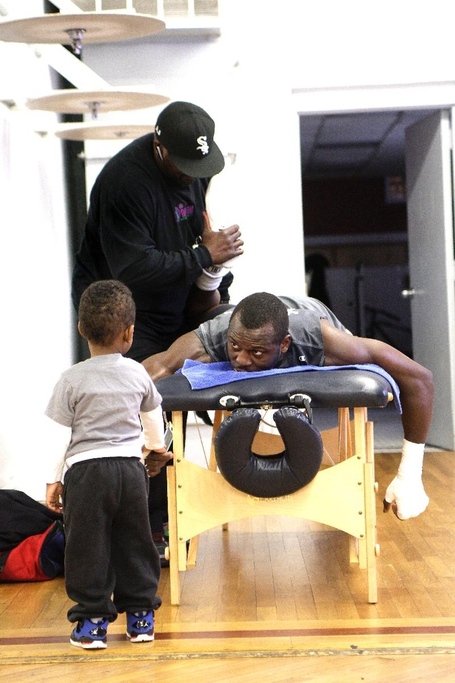 Cunningham gets stretched while son Cruz looks on 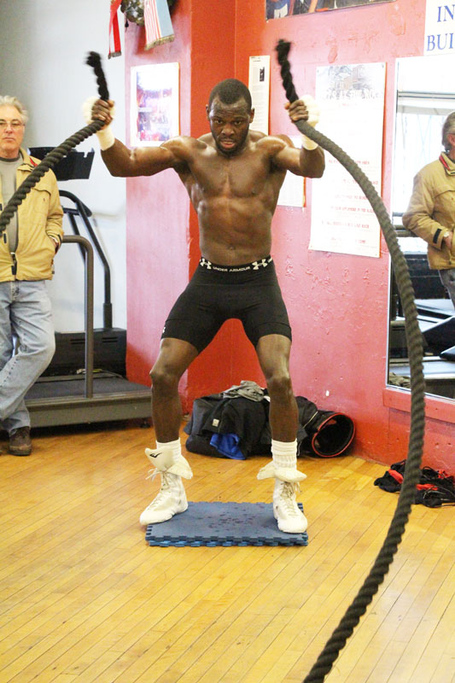 Cunningham exercises with rope (not the kind you jump)

Steve Cunningham's trainer, Nazim Richardson, thinks Steve's intelligence will be a deciding factor in the fight:

Steve Cunningham has been overlooked. He is an intelligent fighter and he's getting smarter all the time. See that's the thing, he's getting smarter all the time if you look at all his fights. In boxing power has always won guys things, but you never see anybody maintain with just power. Never happens...the strongest muscle in your body is that brain and the guy that can use that can find a way to manipulate almost any other person in the ring.

Also fighting on the April 20 card is the immensely talented amateur standout, Karl "Dynamite" Dargan, 12-0, 6 KOs. Dynamite is preparing for his 6 round lightweight contest against Sergi Ganjelashvili of Ft Lauderdale, FL, 4-5-1. He didn't know who he was fighting at the time of this media day, but expressed that he was ready to fight anyone:

Everything is on point. I'm sure they have an opponent for me, but most of my fights they don't tell me who the opponent is. For me it's not really for the fighter to know who the opponent is. A lot of people say well why not, don't you have to strategize, do this, do that? But that's what your trainer is for. Your trainer has to find out who you're fighting. Your trainer has to find your strategy to beat your opponent. That's not the fighter's job.

The main thing for me right now is staying active. The more active I am the better. The better you guys see me. I don't think you guys have even seen the best of me yet as a professional. 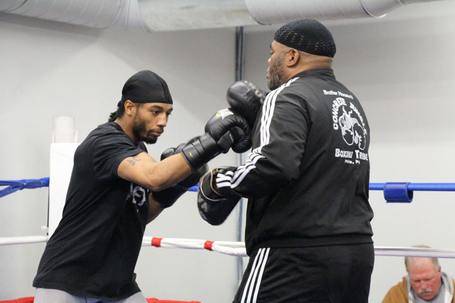 April 20th at The Theater at Madison Square Garden in New York features a 12-round heavyweight battle between Tyson Fury and Steve Cunningham in the main event. Curtis Stevens will take on Derrick Findley in the 8-round middleweight co-feature. Six additional bouts are planned for the undercard. Doors open at The Theater at Madison Square Garden doors open at 1:15PM ET. The main event and co-feature will be broadcast 4PM ET on NBC as a special 2 hour afternoon presentation of NBC Fight Night. The card is presented by Hennessy Sports and Main Events.

The main event is an official IBF Heavyweight Voluntary Eliminator fight for the #2 position. The winner must meet #1 or the leading available contender to establish the mandatory challenger for Heavyweight King Wladimir Klitschko.