Lamont Peterson faces Lucas Matthysse in the weekend's main bout, with Devon Alexander on the undercard. In Mexico, Shane Mosley returns against Pablo Cesar Cano, and two world titles are on the line in Russia on Friday.

Share All sharing options for: Peterson vs Matthysse, Mosley vs Cano, Lebedev, Povetkin, more: Boxing TV schedule for May 16-18

FOX Sports (Australia), 3:00 am EDT, Will Tomlinson vs Malcolm Klassen, Matt Garlett vs Sipho Taliwe, Garth Wood vs Virgil Kalakoda. Klassen is a former world titleholder, the guy Robert Guerrero beat in 2009 to win a belt at 130 pounds. He's fought just three times since then, but has gone 3-0 in South Africa in those bouts. Tomlinson holds the stupid IBO belt at 130, so he's the champion of integrity, because we all know that Tomlinson-Alan Herrera was a great choice for a vacant "world" title fight at 130 pounds.

BoxNation (UK) / Rossiya-2 (Russia), 11:45 am EDT, Denis Lebedev vs Guillermo Jones, Alexander Povetkin vs Andrzej Wawrzyk. Lebedev-Jones is the long-awaited (sorta) WBA cruiserweight title clash, while Povetkin is defending his WBA heavyweight "regular" belt against unbeaten and untested Wawrzyk on the card, too. It's not great or anything, but I'll sure as hell take it early on a Friday afternoon, won't you? If you will, join us, because BLH will have live coverage.

Wealth TV, 7:00 pm EDT, Ghislain Maduma vs Saul Carreon, James DeGale vs TBA, Baha Laham vs Alan Paredes. The full card will air live, and there's more than this. DeGale-TBA sounds super promising. He's really taken off since leaving Warren for Hennessy. It's not much, but it's on, and I pay that big 99 cents a month for my Wealth TV subscription, so goddamn it, BLH will have live coverage.

Sky Sports (UK), 4:00 pm EDT, Prizefighter. This is a cruiserweight tournament. My taste for Prizefighter has long since gone sour.

SHO, 9:00 pm EDT, All Access: Mayweather vs Guerrero. This is the prologue and final episode of the series, airing before the live fights from Atlantic City.

SHO / Sky Sports (UK), 9:15 pm EDT, Lamont Peterson vs Lucas Matthysse, Devon Alexander vs Lee Purdy. There's no belt on the line in the main event, but big whoop, ya wanna fight about it? They will fight about it! Big whoop! Peterson-Matthysse is a great matchup and will give us a real sense of just how good Matthysse really is. A win here would be his best to date. Alexander-Purdy is decent as a substitute for Alexander-Brook, but Devon is and should be the big-time favorite. Purdy is a good action fighter at the UK domestic level, but has never shown he's ready for the real world stage, in my view. Alexander does sometimes underwhelm, though. Who knows? BLH will have live coverage.

FOX Deportes / Televisa (Mexico), 9:30 pm EDT, Shane Mosley vs Pablo Cesar Cano, Sergio Thompson vs Rocky Juarez. Golden Boy Promotions presents a big night of boxing here in 2006, with Shane Mosley and Rocky Juarez coming to you live in a doubleheader from Cancun! BLH will have some level of live coverage, probably, while obviously dedicated to the relevant SHO card. 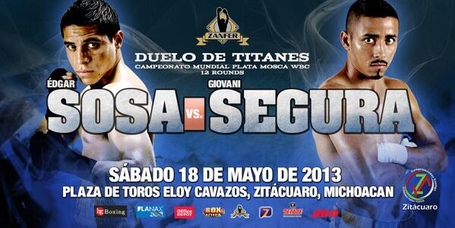 TV Azteca (Mexico), 11:30 pm EDT, Edgar Sosa vs GIovani Segura. This is a nice flyweight matchup. Sosa, 33, is on the back end of his career, but he's won five in a row. Segura, the former lineal champ at 108, returned in March with a TKO-9 win over journeyman Omar Salado, after a long break from getting beaten up against Brian Viloria in December 2011.