Danny Garcia vs Lucas Matthysse: Can Garcia stop the 'Machine'?

Lucas Matthysse looked ruthlessly untouchable last night against Lamont Peterson. If Danny Garcia is next, can the Philly native slow the surging Argentinean and his hype train, or will he be running into a fighter who is peaking and becoming elite?

Share All sharing options for: Danny Garcia vs Lucas Matthysse: Can Garcia stop the 'Machine'?

Generally, I try not to fall victim to hyperbole. I try, I said -- it doesn't always happen. Like anyone, I can be suckered into believing the hype, into thinking that Fighter X is definitely, without question the next big thing.

Amir Khan? I was sold. Then his chin happened. Andre Berto? Hey, I thought he was a more complete fighter than he turned out to be. Canelo Alvarez? I'm already there, man. I never fell for Joel Julio, though. So that's good.

There are two cases right now that stand out: Unbeaten middleweight destroyer Gennady Golovkin, who has yet to be seriously tested even on paper, but will be on June 29 against Matthew Macklin, and junior welterweight Lucas Matthysse, a two-loss young veteran who should arguably be undefeated.

Matthysse's hype has mostly exploded over the last year. Wiping out Humberto Soto, Olusegun Ajose, and Mike Dallas Jr had folks all ready to rock. That's not to say he didn't win over fans with dubious losses to Zab Judah and Devon Alexander.

The flaws in Matthysse seemed obvious. He was often too deliberate, and simply started slow far too often, giving opponents time to bank rounds, and even if rounds were debatable, flirting too heavily with giving them away just because he didn't appear to be doing enough.

Then he fixed the flaws. He tore through three guys who, while not spectacular, are all decent fighters. And last night, when he smashed the very capable Lamont Peterson in three rounds, we saw the birth, I believe, of a guy who's about to be dangerous for a long, long time.

Richard Schaefer exuberantly shouted, "We have the next Manny Pacquiao!" after the fight, "It's Lucas 'The Machine' Matthysse!"

I've said before that there's something to really elite fighters that is different than very good, or briefly "great" fighters, and it's the swagger with which they carry themselves. Mayweather has it. Manny had it. Marquez has it right now. Hopkins has it. Roy had it. Ali had it. Oscar had it. Leonard had it, Duran had it, Hagler had it. Tyson definitely had it.

It's a sort of body language and aura that says, "Of course I'm going to win." They are fearless when in that mindset, not in the way that Arturo Gatti was fearless, but in that they know they're in control. That the other man, whoever it is across the ring, is going to have to earn his way into the fight.

Last night against Peterson, Matthysse (34-2, 32 KO) definitely had that aura. A slow first round saw Peterson likely shade the frame, working from the outside, cautiously avoiding being in Matthysse's wheelhouse. It's easy to say that that's not really Peterson's comfort zone, though, and it's true. Lamont is better in the trenches. Matthysse knew that, and probably knew he could easily drag Peterson into that fight, which is the fight he also wanted.

In round two, an aggressive Matthysse went straight at Peterson (31-2-1, 16 KO) and found that the DC native was perfectly willing to oblige the fight that Lucas wanted. In close, the two of them threw shots, got rolling, and it was clear quickly that Matthysse was the stronger, better man.

Nothing about Lamont Peterson changed last night. He was still the same really good fighter he's been for a while now. He was the same guy who stood up to hard shots from Victor Ortiz -- say what you will about the "Space Man," but he can thump -- and went 12 hard, gritty rounds with Amir Khan.

Matthysse was too much. Matthysse was a force of nature. Peterson just couldn't handle the furious power, the precision, the exceedingly calm way in which Matthysse dissected him with power shots and put him into a mental situation that will take a special fighter to overcome.

Matthysse quickly and severely made Peterson doubt his own ability. Lamont Peterson has lot before, when Tim Bradley outclassed him, but Bradley didn't dominate Peterson like that, mentally or physically. Peterson was unwillingly fighting stupidly, because there was nothing he could do to stave off the Matthysse charge.

If the world is fair and just, and Schaefer follows through on his promise, Danny Garcia will be next up to try handling Matthysse. Can the Philly native fare better? Yes, he can, and though it would be hard to do a lot worse than Peterson did last night in terms of the black-and-white facts and results of the fight, Garcia shouldn't be counted out against Matthysse. 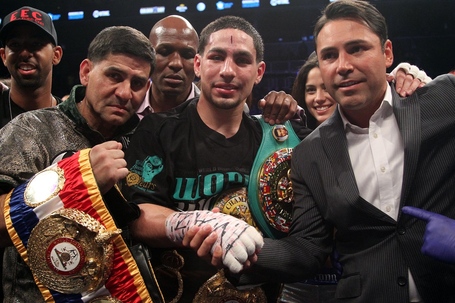 True, Garcia's April 27 win over Zab Judah wasn't as impressive as what Matthysse did to Peterson, but it showed that Garcia can handle a determined, abnormally hungry veteran giving a surprisingly inspired effort. Judah, though aged and not what he was, is still a good fighter, and though Garcia had some moments of struggle, he without question clearly won what was a very good fight.

Last year, Garcia beat Erik Morales, stunned Amir Khan with a fourth round TKO, and then finished off the remaining scraps of Morales in an October rematch, eight months after their first encounter. Add Judah to that list, and even though Morales wasn't in good shape for either fight, I think you have a list of wins that stands up pretty well to Matthysse's last four over Soto, Ajose, Dallas, and Peterson. And if you only wish to count Morales once, then go back and add Garcia's win over Kendall Holt to his tally.

Danny Garcia has succeeded not just on talent, but by not getting flustered, and by staying calm, cool, and collected. In contrast to his outrageously loud and purposely obnoxious father/trainer Angel, Danny is really mellow at work. You can say he's flat-footed, you can say he's slow, you can say a lot of things against his chances opposite Matthysse.

But Garcia is a smart, patient fighter, physically strong, and takes a good shot. We've seen guys like Khan and Judah come at him, bring superior speed, and bang him around a little bit. Khan was doing especially well before Garcia clipped him and sent him into a spiral over what was left of that fight. What we have not seen is Garcia panic in any way, as we did see Peterson do last night. Garcia, to date, does not get overwhelmed. He's sound, he's clever, and he can fight.

I think it's perfectly understandable to buy into the Lucas Matthysse hype after last night. I'm on that train 100%. He looked like a killer, a true elite fighter last night. I might believe he's the best 140-pound fighter in the world right now. I might even believe that he'd be a better test for Floyd Mayweather than Khan, Alexander, and possibly even Canelo, even counting Canelo's size advantage. (I actually do think that. I make no apologies, and offer no technical breakdowns, and don't care if anyone disagrees. I'm in love with the Mayweather-Matthysse idea right now, and as Percy Sledge hopefully has taught you, love unfortunately makes fools of all, and while in its grasp, we do not care.)

Matthysse looks untouchable after last night. Can Garcia's strengths carry him through a fight that seems to favor Matthysse on paper? Will the fight actually happen? Will Al Haymon stick two of his hottest fighters in the ring with one another? Can Richard Schaefer come through for boxing fans everywhere?

If all goes well, we'll be finding out about Garcia vs Matthysse in September.