Modern pay-per-view undercards are often rightly criticized for being stacked with fights that don't promise action, aren't well-matched, and feature nothing of major interest to even serious boxing fans, but Saturday night's Mayweather vs Guerrero show on Showtime pay-per-view is, on paper, an exception.

The opening two bouts are rather standard fare, but there's one fight that easily puts this card head-and-shoulders above most PPV offerings of recent vintage (though, to be fair, the cards have gotten a bit more palatable regularly in the last couple of years).

That fight is a WBC featherweight title tilt between Daniel Ponce De Leon and Abner Mares. By itself, this would be a highly-anticipated Showtime main event for dedicated fans, as it pits a young, aggressive, two-division titlist in Mares, challenging a powerful and tricky veteran in Ponce De Leon, himself a two-weight titleholder now.

Mares, 27, is a former Mexican Olympian who grew up in California after being born in Guadalajara. He has kept one of the most difficult schedules in boxing since 2010, when he went from easily defeating club fighters straight into the bantamweight world title scene. His draw with Yonnhy Perez earned him some big respect, and wins over Vic Darchinyan and Joseph Agbeko gave him the Showtime mini-tournament crown in the summer of 2011.

That fight with Agbeko, though, was highly controversial. Referee Russell Mora had one of the worst nights any referee has ever had, ignoring constant low blows from Mares (25-0-1, 13 KO), who won a competitive, hard-fought battle where Agbeko was often pained in his genital region from Mares' endless fouling.

To Abner's credit, he accepted and even desired an immediate rematch four months later, and in December 2011, he clearly beat Agbeko in Anaheim, despite suffering a pretty notable cut in the second round.

Mares had used the same dirty tactics against Vic Darchinyan, something Darchinyan has not stopped complaining about to this day, but we now know exactly the type of fighter Abner Mares is: He's a friendly young man, but he's a devil in the ring. Anything he can get away with, he will take advantage of, for as long as he can. If he can hit you in the nuts, elbow you, butt you, hold, shove, whatever, he's going to do it so long as a referee doesn't actually do anything about it.

Last year, Mares moved up to 122 pounds, where he beat long-faded former flyweight titlist Eric Morel in a rather easy bout in April, then was at his rough best again in November for a win over top bantamweight Anselmo Moreno, a slick boxer who hadn't lost since 2002.

Saying that Mares established himself as a true top fighter at 122 is defensible, since he was considered the No. 2 man in the division, behind only Nonito Donaire, and ahead of new kingpin Guillermo Rigondeaux. But his wins at 122 came over Morel, who hadn't done anything notable in years, or in several weight classes north of 112, and Moreno, a top fighter, and a credible win to say the least, but a bantamweight, not a super bantamweight.

While Donaire's achievements at 122 have been sometimes criticized, his wins over Jeffrey Mathebula, Toshiaki Nishioka, and even Wilfredo Vazquez Jr and Jorge Arce, when combined, tower over what Mares did at 122. 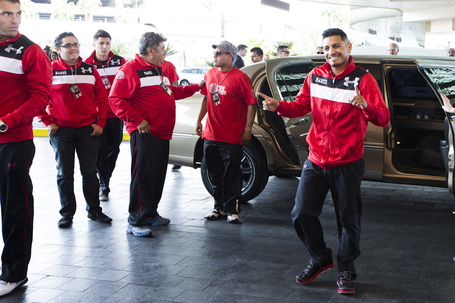 Now moving up again, Mares' size is a talking point going into this bout with the 32-year-old Ponce De Leon. There isn't a big height difference between them, but Ponce De Leon has a four-inch reach advantage, and also knows exactly what he can do at this weight. His body has been here since 2009, and his only losses since moving up were to Yuriorkis Gamboa and Adrien Broner, the latter at 130 pounds, and highly debated, at that.

Ponce De Leon (44-4, 35 KO) beat Jhonny Gonzalez for the WBC belt last year, and has dealt well in his career with guys who can box. He was at one time a very one-dimensional, southpaw slugger, with good pop, but extremely slow and without much by way of skill. He's still slow, and far from some master technician, but Ponce De Leon is an extremely awkward and cagey opponent, a guy who can make better boxers look worse than they are, Broner and Gonzalez recent examples of that.

Mares is talking about fighting smart but being prepared to brawl, and that's what should actually be expected, too. There's a good chance he'll try to outbox Ponce De Leon in the earlygoing, but while he has a speed advantage, it's not exactly the speed advantages that Gamboa or Broner held. Gamboa toyed with Ponce De Leon, really, but Broner had all kinds of trouble.

Is Mares as good a pure boxer as Gamboa? No, he's not. But is he better overall, pound-for-pound? Maybe. He's proven to have a good chin, a lot of toughness, and plenty of heart -- also, he's totally willing to make a fight dirty, maybe even eager to do so.

These two are friends outside of the ring, have worked in the gym together frequently in the past, and sometimes, that can result in a great fight, especially when it's not one guy on the way up and the other on the way down. Mares may find it tougher than expected to simply box his way to victory here, and also may find it hard to really get Ponce De Leon into a serious brawl.

Though his reputation suggests action, Ponce De Leon isn't really all that exciting most of the time. He's not a pretty fighter in any way, and he's happy to have an ugly, somewhat dull fight so long as it's going his way. If he can get Mares to overthink his approach early, he's got a very good chance at winning this fight, which it seems would be an upset to most, given Mares' track record, youth, and regular main event exposure on Showtime.

This may not be a 50-50 fight, but a Ponce De Leon win would hardly be shocking. That said, it would be arguably the best win of his career. 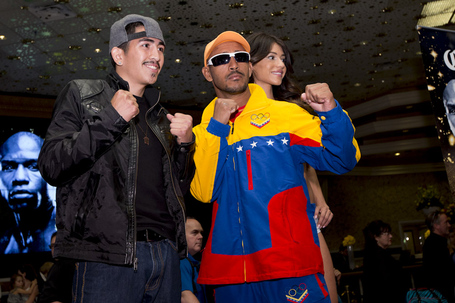 Santa Cruz, 24, had a breakout campaign in 2012, going 5-0 on the year, and 4-0 in fights televised on either Showtime or CBS. He kept a torrid schedule in the second half of the year after beating Vusi Malinga for the IBF bantamweight title in June, fighting again in September (TKO-5, Eric Morel), November (TKO-9, Victor Zaleta), and December (UD-12, Alberto Guevara).

By his own standards, Santa Cruz labored through the December fight, giving some doubt as to whether or not it's really all that incredibly wise to fight that frequently, at that level. He also has chosen to vacate his bantamweight title and move up in weight, just in time to avoid a potential clash with Mares, which was about the best fight at 122 that Golden Boy could currently make. (I'm not actually suggesting that Mares or Santa Cruz are "avoiding" that fight, so calm down. It will probably happen eventually, and it will be special.)

Munoz, 34, figures to be an easy step up. The Venezuelan veteran is preaching confidence that he can win this fight, and he is a former titleholder at 115 pounds, but he hasn't beaten so much as a fringe contender since 2008. He all but disappeared after dropping a split decision to Cristian Mijares that year, going 4-1 since with four empty wins and a loss in 2010 to bantamweight titlist Koki Kameda in Japan, where Munoz experienced his greatest career moments.

Santa Cruz is a machine that produces punches in bunches, and figures to be able to overwhelm a smaller, older Munoz, who has been almost out of the game for five years now. 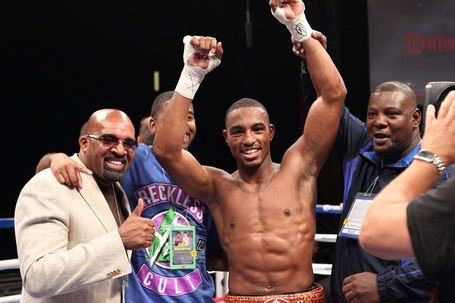 Rosado, a 27-year-old Philly tough guy, made a little noise at 154 pounds last year, winning fights over Jesus Soto Karass, Sechew Powell, and Charles Whittaker on NBC Sports, earning himself a shot at the IBF title. Either fearing he'd have to sit and wait for a shot that would never come, or just seeing an opportunity he couldn't pass up, Rosado eschewed the promised title shot to go up to 160 in January and fighter middleweight beast Gennady Golovkin on HBO.

It's hard to blame him -- a shot on HBO for a guy who has learned on the job for his career, and made something from a projected nothing, that's hard to pass up. And he already had five losses -- he wasn't really taking any huge marketability risk against Golovkin, who was expected to beat him handily, and did, mostly, though a battered Rosado certainly earned points for balls that night, before trainer Billy Briscoe did the smart, sportsmanlike thing and stopped the bout as blood stained the canvas and both fighters' trunks.

And that puts him here, where he's in the familiar position of "opponent" to a prospect. Rosado has been in this same role in the past against Alfredo Angulo (TKO-2 loss), Fernando Guerrero (close UD-8 loss), and James Moore (a win that derailed Moore's career).

Love, 25, is part of the Mayweather "Money Team," hyped in part because of his connections, and in part because he does have skills. A Detroit fighter, Love has yet to face anyone close to being called a contender, though his win earlier this year over the abnormally tough trial horse Derrick Findley was a solid victory for where he's at in his career. Beating Rosado would be better, but there are plenty of people who think Rosado has the experience and the talent to pull this off. J'Leon Love is being marketed as a "future star" for Mayweather Promotions and potentially, in turn, for Showtime boxing. He can't afford a slip-up here if his star is going to rise soon. This could also wind up being the best action fight of the show.