Floyd Mayweather is in the driver's seat for his next fight and the foreseeable future, but who will he face? At 36 and with five fights remaining on his Showtime contract, will Mayweather be careful of his choices for opposition?

Floyd Mayweather did what he always does last night in Las Vegas, beating Robert Guerrero over 12 rounds of largely non-competitive boxing, retaining his WBC welterweight title and running his record to 44-0.

It was a mostly expected sort of fight. Guerrero's mauling ability and southpaw stance were lauded by promoters and a few eager media members and fans, and combined with Mayweather's advancing age and one-year layoff that included a couple months in the pokey, some did expect it to be a hard fight for Floyd. It turned out in the end to be just about anything but the "long night" that Oscar De La Hoya insisted it would be, but then that's no surprise, as Oscar also once insisted that Mayweather-Ortiz would set new records on PPV, which of course, it didn't come remotely close to doing.

Mayweather has five fights left on his record-breaking, $200 million deal with Showtime, and is limited to what's out there in the Golden Boy stable or free agent pool. Sure, he could fight someone with DiBella or Goossen or whatever, but they don't really have anyone for him to fight, anyway, save for Sergio Martinez, and the fact is that Mayweather has not fought anyone who is not with Golden Boy or a free agent since he left Top Rank. It's been a long, long time, and Mayweather is very unlikely to come to any peaceful standing with Bob Arum, which could facilitate a fight between Mayweather and a Top Rank fighter -- and really, outside of Manny Pacquiao, there's not really anyone over there who would be a standout candidate, either.

Let's look at five options and a wild card. Certainly, someone else will probably make their case in due time for a fight with Floyd, but these are the leading options as of right now. 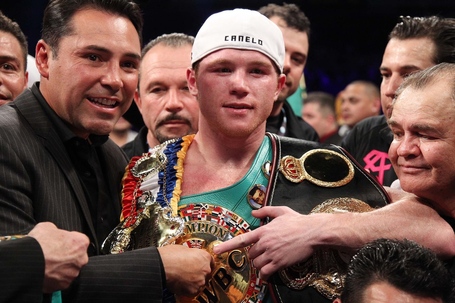 Pros: It's the new "it fight," and a surefire PPV hit -- we're talking about a fight that may be able to legitimately challenge the Oscar-Floyd marks from 2007, the all-time biggest pay-per-view event. Alvarez (42-0-1, 30 KO) is coming off of a very good win over Austin Trout, and has mowed down aging stars and faded contenders and former titlists. Ever since he first fought on a Mayweather undercard in 2010, at the age of 19, Canelo has wanted to face Mayweather. He's now firmly established as the world's best junior middleweight.

Cons: Mayweather's reluctance to give opponents an inch in negotiations is a problem. Alvarez can draw on his own -- those 40,000 fans at the Alamodome for the Trout fight were almost all his, with due respect to Austin Trout and the fans he brought in. He drew a terrific house for that night, and for last September's bout in Vegas with Josesito Lopez, which likely would have done even better without Chavez-Martinez down the street, and would have been a PPV fight, too. It would seem like Alvarez's drawing power would be a plus, but it's not, really. Mayweather can sell a PPV with Robert Guerrero, he doesn't need Canelo and a fellow ego going, "Hey, pal, I'm going to be responsible for a lot of the gate here. Pay me."

Will It Happen? Not in September, and probably not until, at the earliest, May 3, 2014. If Mayweather doesn't fight until then -- which is a sincere possibility, no matter what he says -- and Alvarez puts a beating on, say, Cotto in September, the fight just might be too rich to pass up.

One More Thing: Canelo is a true 154-pound fighter. Mayweather has fought twice in the junior middleweight division, and both times had some struggles, with Oscar De La Hoya and Miguel Cotto, neither of whom came into their own at that weight. Oscar started in the sport at 130, like Mayweather did, while Cotto started at 140 and was still elite at 147. Oscar was better than Cotto at 154, but neither of them were at their best, plus both of them had seen better days, period. Alvarez is a strong, sturdy junior middleweight, and probably can't make a catchweight anywhere south of 152 pounds, plus Mayweather has made a big stink about catchweights in the past. Will Floyd dare fight at 154, where he really doesn't belong and survives on pure talent, against a young, powerful, legit junior middleweight?

Pros: Garcia (26-0, 16 KO) is on a very strong run right now, with five straight wins over Kendall Holt, Erik Morales (twice), Amir Khan, and Zab Judah. While it's easy to poke holes in those wins -- Holt is a fringe contender, Morales was old and then older, Khan has no chin, Judah is old -- it's as legit a run as anyone else is on right now when it comes to the Mayweather Sweepstakes. Who among the candidates has really done something significantly better lately? He's got a controversial, charismatic father/trainer, who could turn the mental games up to 11 in the pre-fight build up. He's a good fighter, and another "young lion."

Cons: If the public doesn't forget immediately what it looks like when a guy who's been called "slow" and "flat-footed" jumps from faded stars and B-fighters into a Mayweather fight, Garcia could be tough to sell as an opponent. He doesn't even have the mythical southpaw advantage, with which Floyd supposedly struggles.

Will It Happen? I want to just say here, and we'll remember this for each entry coming up: Not in September. Floyd is really, probably not actually fighting in September, y'all. Garcia is tentatively set to return on September 7, against the Peterson-Matthysse winner, if that actually can get done.

One More Thing: Garcia would actually make wonderful sense in a lot of ways, but he could further earn the shot and make it more intriguing if he sticks at 140, faces the Peterson-Matthysse winner, and comes out the clear top dog at 140. Then you're talking about a young, undefeated Puerto Rican-American champion from one of the great fight cities challenging the king. 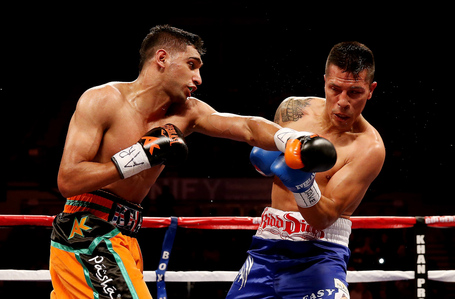 Pros: Khan (28-3, 19 KO) is always entertaining, and has a good following in the UK, which would mean big money on both sides of the pond. Though Mayweather's and Khan's last fights aired on BoxNation, surely Golden Boy could work a deal with Sky to run a PPV fight there for Mayweather-Khan. There would, believe it or not, be a bit of intrigue in the fight, in that Khan is one of the few men in the sport who can match or even exceed Mayweather in pure hand speed.

Cons: Khan is a good fighter, but while his vulnerability makes him exciting, it would be hard to sell this fight to a lot of people. Amir has a lot of detractors who expect him to get knocked out on every single punch that lands against him, though that is, of course, stupid. Does the fight make up in UK PPV what it might sacrifice in the States?

Will It Happen? To be frank, all signs are pointing to yes on this one. Khan plans to fight late in the year, one idea being he'd face the "tournament" winner at 140, and the other a full-fledged move to 147. If Mayweather wanted to delay a return until, say, November or December, this fight could fly then. The WBC have ridiculously and transparently ranked Khan No. 2 in the world at welterweight.

One More Thing: Let's clear this up fast: Mayweather and Ellerbe may give lip service to fighting in England, but unless they can get a really big-time guarantee for money, it's not going to happen. There's simply too much money in Las Vegas, where Mayweather is always a gate attraction and pulls in major cash. They can make more selling 14,000 tickets in Vegas than selling 40,000 in the UK.

Pros: He holds a title and he's promoted by Golden Boy.

Cons: Almost everything else, honestly. Alexander (24-1, 13 KO) isn't exciting, isn't well-known, doesn't have any real name value outside of St. Louis, which is a small-money fight town. Mayweather's camp floated this idea a few months back, before making the expected Guerrero fight official. Reaction was ... unkind.

Will It Happen? It could. If Floyd is really just looking to cherry-pick, this is the type of fight we're talking about. Alexander is credible, young, and talented, but no real threat to Mayweather.

One More Thing: Seriously, does this idea interest anyone?

Pros: Oddly enough, there are still a few people who think that Ortiz (29-4-2, 22 KO) was "giving Floyd problems" back in September 2011, before the "sucker-punch" finish. So those people would probably be pretty excited to watch Schizo Victor get another shot. And never discount the hard-dying belief that promoters have when they think they've got a superstar prospect who doesn't really pan out.

Cons: He got his jaw broken by Josesito Lopez in his last fight, and hasn't won a fight in two years now. When you look beyond the fight with Andre Berto, Ortiz's record remains paper-thin for someone of his notoriety. Also, this ain't Berto.

Will It Happen? One figures Floyd isn't exactly keeping tabs on Ortiz, because that issue is done and dusted in his mind, but there are worse things out there than a rematch with the storyline these two would have. If Ortiz can actually win a fight or two, he could back his way into a rematch. 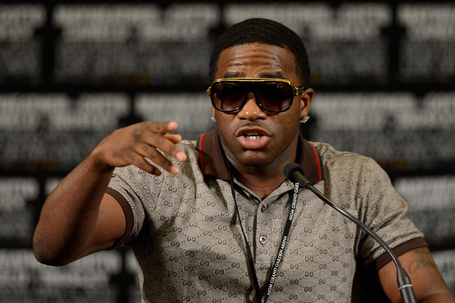 Pros: Young, flashy, controversial, constantly seeking and then receiving attention, Broner (26-0, 22 KO) has won titles at 130 and 135, and targets Paulie Malignaggi and the WBA welterweight title next. Given time, Mayweather-Broner could be a rare "pass the torch" story.

Cons: These are two Al Haymon guys, and though Peter Quillin got to trounce Fernando Guerrero last month, it's not like Haymon is high on putting his fighters in against one another. It's unlikely, too, that Haymon would want to rush the potential Next Floyd into a fight with the real McCoy. If that can be avoided, the current thought would probably be that that's the best thing.

Will It Happen? It's interesting to think about, but as stands currently, no. However...

One More Thing: Floyd and Broner are friendly with one another for now, and Broner obviously idolizes Floyd to an almost creepy degree sometimes (Paulie Malignaggi said, "You even stutter like Floyd"), but if that friendship ever went sour, as it very conceivably could given the egos involved and the possibility of Broner eventually feeling like it's his time to dethrone the king, it could, in theory, be a huge fight in a couple of years.