10 boxing fights you should stick around for, after Mayweather-Guerrero

Floyd Mayweather's return to the ring is history, along with many of the casual fans. But hey, Johnny Dontcare, here are some other upcoming fights you might want to hang around and watch. Make sure you subscribe to HBO and Showtime!

Share All sharing options for: 10 boxing fights you should stick around for, after Mayweather-Guerrero

Floyd came, he saw, he dominated, and now he's gone for the time being. "Money" Mayweather's return to the boxing ring gave the sport the short-term boost of worldwide attention that it always does, but now hardcores, diehards, heads, and other words for dedicated fans will get back to their normal routine of nobody much caring what's going on.

But wait! It doesn't have to be that way, you guys! There are LOTS of good fights in boxing -- many of them far more likely to turn your wife, girlfriend, husband, boyfriend, neighbor, son, daughter, nephew, niece, drinking buddy, acquaintance, or actual friend into a boxing fan than a fairly routine, one-sided Floyd Mayweather fight. There won't be behind-the-scenes "documentary" series dedicated to these fights (well, maybe one or two of them), but once you actually watch the fight, most of these should at least be good, some great.

So here are ten (10) fights you should hang around and give a look.

(Quick note: If you're ready to get all up in arms that Golden Boy gets the short end here, please recall that a lot of their top names just got done fighting the last three weeks. They're on a phenomenal run right now, and I'd say they're well-represented on this list anyway.)

Lara (17-1-2, 11 KO) can sometimes be a bit dull, but the 30-year-old Cuban southpaw is a legit contender at 154 pounds, the division of Canelo Alvarez and (sometimes) Floyd Mayweather. His boxing skill combined with his lack of fans make him a risky proposition for anyone with a name, but Mexican brawler Angulo (22-2, 18 KO) would probably fight a rabid bear if you asked him to. There is no "style" or flash to Angulo, 30, who plods forward and throws hard shots, either eager or just willing to take back whatever his opponents can dish out. There is a chance that Lara will be able to box from the outside and control this without a lot of excitement, but it's a well-matched fight, and Angulo is very hard to deter. 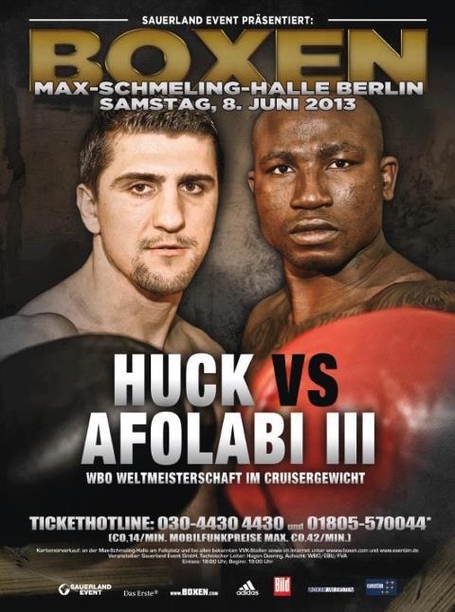 This one won't air in the US, but ARD in Germany will have it, and it's too good a fight not to put on this list, even though it does nothing for our traffic numbers, and you, Tom-Tom Casual, are barely even aware a "cruiser-weight?" division exists, let alone that it's mostly centered in "Europe?" Huck (35-2-1, 25 KO) has come away with his WBO belt in two previous defenses against Afolabi (19-2-4, 9 KO), a debatable win in 2009 and a debatable draw last year in what was a hell of a rugged fight. The 32-year-old Afolabi may be the most awkward, talented fighter in the division, but 28-year-old Huck is willing to go to just about any lengths to win a fight, and if Afolabi's inactivity (he hasn't fought since their last bout in May 2012) catches up to him, Huck's aggressive nature could be too much. But it's a toss-up fight, just like the first two turned out to be.

Malignaggi (32-4, 7 KO) can't always be relied on for major action, but when he's in with a good opponent, his fights are never dull. He's taken pretty thorough beatings from Miguel Cotto, Ricky Hatton, and Amir Khan in previous bouts with top-level foes, and had a pair of entertaining scraps last year with Vyacheslav Senchenko and Pablo Cesar Cano. Broner (26-0, 22 KO) is coming up from lightweight, but Malignaggi is no imposing welterweight, either. And the two have already turned this into a mud-slinging contest of vulgarly epic proportion, so there's that.

Argentine slugger Maidana (33-3, 30 KO) had an inauspicious beginning in his move up to welterweight in February 2012, getting picked apart and mentally broken down by Devon Alexander, in what turned out to be a totally lopsided affair, with many expecting that Maidana's pressure and power would wind up the difference, rather than Alexander's speed, timing, and, well, overall class. But Maidana rebounded from that to win a war in September against Jesus Soto-Karass, followed by an easy win at home in December. Lopez (30-5, 18 KO) had an eventful 2012, breaking Victor Ortiz's jaw in order to be served up as a sacrifice at the altar of Canelo in September, a rather shameful physical mismatch which Lopez took as seriously as possible, even fighting like he thought he might be able to overcome the gross difference in their body sizes. Long story short, Maidana likes to brawl, Lopez scoffs at odds, and this should be a hell of a fight.

Peterson (31-1-1, 16 KO) and Matthysse (33-2, 31 KO) could be argued as the two best 140-pound fighters in the world, if you want to be all contrarian and "hate upon" Danny Garcia, who holds the WBC and WBA titles and is the popular choice for current division top dog. Peterson's best win is still over Amir Khan, and that has plenty of questions, to say the least. Matthysse's best win is probably one of his losses to Zab Judah and Devon Alexander, because Olusegun Ajose and Humberto Soto shouldn't really be getting anyone all hot and bothered. Look at me, getting all negative-first. That's just like me, you know? It's, like, I know I'm doing it. Here I am, haha, trying to be kind and gentle, and only say good things, but these stupid realities keep getting in the way. Goddamn it, haha! You know what I mean? Anyway, this is a good fight. Who R U Picking?

Say what you will about Lopez (33-2, 30 KO) having not reached what was believed to be his full potential from early on in his pro career, but he's never, ever, ever in bad fights. He's had Fight of the Year contenders with Orlando Salido in 2011 and 2012, and one in 2009 with journeyman Rogers Mtagwa. As far as a pure boxer goes, Garcia (31-0, 26 KO) will be the best Lopez, 29, has ever faced. But though the 25-year-old Garcia mostly put on a clinic in dethroning Salido in January, there was some skepticism after about whether the fight ended due to a busted nose, or due to he and trainer/brother Robert not liking what they were seeing as the fight entered the home stretch, with Salido still pressing forward and going for broke, distantly trailing on the cards. Lopez can punch like hell, and we don't know how Garcia will do with a good southpaw. And Lopez's flaws and shortcomings? All those do are making him a spectacularly exciting fighter.

Even Matthysse can't hold a candle to the collective erection that Golovkin (26-0, 23 KO) gives Hard-Core Boxing-Heads. Though Golovkin hasn't beaten anyone particularly impressive, his skill is obvious and real, and he fights with a rare swagger that, frankly, is only seen in the truly dominant. Golovkin doesn't half-ass anything and isn't arrogant in the ring, but he fights as if, you know, of course he's going to win. Duh. Macklin (29-4, 20 KO) is a solid contender and by far the best opponent Golovkin has faced to date. Also, Macklin doesn't mind a proper fight. This one could be a war.

They had a terrific fight in 2010 in Denmark, and now they'll do it again in London. If the fight looks like it did last time, expect Froch to get the decision in a very good fight, the way Kessler got the decision in a very good fight in Herning. With Andre Ward out of action for the time being, this is sort of a default 1 vs 2 matchup at 168 pounds. I mean, there's not a lot to say about this fight. It's a pair of top fighters fighting for what should be a rowdy crowd at the O2 Arena. What more can you ask?

There is a chance that Marquez-Bradley will be tactical or even boring, but I wouldn't bet on it, personally. Bradley (30-0, 12 KO) seems to be as concerned with being popular as he is with winning, which is arguably dumb if it's true (I don't know, I'm just talking observational bullshit, like usual), but hey, you want action, he gave a lot of it against Ruslan Provodnikov. Marquez (55-6-1, 40 KO) looks to gain a title at 147 pounds to go with his belts from 126, 130, and 135. That dastardly Marquez, just skipping right over the 140-pound division, I can't believe someone would do that, how dare he, ooh, I'm all mad now. This is currently set for September 14, but if Floyd Mayweather fights on that date, it will be moved. Honestly, I'd expect Golden Boy can use Canelo Alvarez vs Miguel Cotto to muscle this to another date, too. Arum knows that Marquez-Bradley exists on a thin line between big fight and second-tier event, despite the quality of the fighters, which is excellent.

Man, look, I'm talking to Bobby Half-a-fan here, alright? Pacquiao-Rios is No. 1. NUFF SAID. (There is no saying I like less than "nuff said.") Also, this will be good at worst, and a Fight of the Year favorite at best. I don't really care if these two have three straight losses between them, there's no way they have a bad fight. Rios won't be content to go to the cards, either. Pacquiao's finishing ability has been questioned in recent years -- he hasn't stopped anyone since 2009 -- but Rios may force his hand. Rios did go 12 full with Mike Alvarado on March 30, true enough, but Rios was trying to force a conclusive finish there one way or another.