Share All sharing options for: Garcia vs Lopez, Jennings vs Fedosov, Kovalev vs White, more: Boxing TV schedule for June 13-15 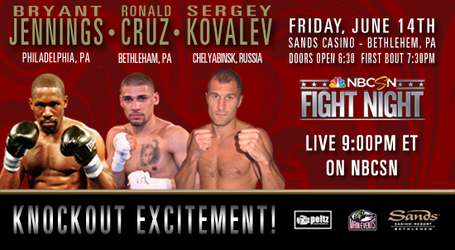 NBC Sports, 9:00 pm EDT, Bryant Jennings vs Andrey Fedosov, Sergey Kovalev vs Cornelius White, Ronald Cruz vs Ray Narh. A solid Friday night tripleheader from Main Events, with Jennings staying busy against Fedosov, a mediocre heavyweight but someone for the American to fight, at least, which is better than sitting around and waiting for a shot that isn't coming just yet. Kovalev-White is a nice fight between a pair of guys who are about as close to a world title shot as they'll be getting, and Cruz-Narh is a fight that features a guy who shit his pants on a Pacquiao undercard one time, and also Ronald Cruz. Ryan Bivins will be there live, and we'll have live TV coverage on the site, too. BLH will have SUPER live coverage (which is more than regular live coverage).

ESPN2, 10:00 pm EDT, Jundy Maraon vs Juan Carlos Payano, Jorge Diaz vs Yenifel Vicente. This is a Friday Night Fights card! I honestly don't know much about these dudes, and I'll be watching the NBCSN show live, but you can talk about these fights on the site if you want to, and I plan to record this one and check these guys out after. BLH will have interim live coverage.

HBO, 10:45 pm EDT, Mikey Garcia vs Juan Manuel Lopez, Terence Crawford vs Alejandro Sanabria. Even if you're of the sane persuasion that expects Garcia to have his way with Lopez, the reckless Puerto Rican action star should make it more than worth tuning in to see. I wouldn't totally count Lopez out -- he can bang, and he takes a hell of a shot. Crawford will hope to look a bit more exciting than he did against Breidis Prescott, or maybe I hope that more than he does -- Crawford probably just wants the win. BLH will have live coverage.