Paulie Malignaggi faces Adrien Broner in the weekend's biggest fight, with a pair of notable undercard bouts in Brooklyn. There's also a world title fight in Moscow on Friday in the cruiserweight division.

PPV (Poland), 11:00 am EDT, Krzysztof Wlodarczyk vs Rakhim Chakhkiev. I think my favorite thing about this is that after the PPV in Poland, fans will be treated to a gift of pornography on their TV. If they'd like to not watch the porno, they are advised to change the channel by the official carrier web site. Outstanding. Anyway, this is a good fight -- Wlodarczyk is a long-running top fighter at cruiserweight, while Chakhkiev is a major talent on his way up, a strong puncher with a good amateur background who also has a frightening unibrow. I wouldn't be surprised if BoxNation picks this up. If they do, we'll definitely have live coverage. If they don't, we'll do our best. BLH will probably have live coverage.

ESPN2, 10:00 pm EDT, Rances Barthelemy vs Fahsai Sakkreein, Don George vs Caleb Truax. Fairly standard FNF doubleheader these days. Barthelemy is an OK fighter. George, as much as I genuinely like watching him fight and think he's got the balls of a threatened bull, probably tops out at the FNF level, same with Truax, a decent club fighter who gave Jermain Taylor a scare, which said a lot more about Taylor than it did Truax. These are well-matched fights, at least on paper, so that's good. Better this than two wipeout pieces of crap. BLH will have live coverage.

SHO / BoxNation (UK) / SuperChannel (Canada), 9:00 pm EDT, Paulie Malignaggi vs Adrien Broner, Johnathon Banks vs Seth Mitchell (rematch), Sakio Bika vs Marco Antonio Periban. The best news about this fight is that it means the tasteless Malignaggi-Broner promotion will be over and done with soon enough. I usually get into trash talk stuff, but when you get into NUDE PHONE PIXXX and "weekend pussy" and guys sounding like a couple of horny meathead college sophomores who used to rule high school but had a bit of a tough freshman year because frat houses can be rough in the early going, but now they can pick on the new meat, bro, and get their marginalized self esteem back, then I sort of check out. I don't mind when it's guys threatening to knock each others eyeballs into a parallel universe, but this was a bit much for me. And I'm interested in the fight, too. Malignaggi is not a great fighter, but Broner has earned his Ring Magazine Official Pound-For-Pound ranking about as much as the Miami Heat have earned the right to be compared to Jordan's Bulls. The undercard fights should be solid. Banks-Mitchell II could end at any moment, and Bika-Periban is a good matchup at super middleweight for the belt Andre Ward no longer holds. BLH will have live coverage. 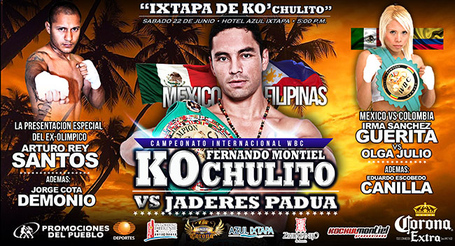 Televisa (Mexico), 11:00 pm EDT, Fernando Montiel vs Jaderes Padua, Irma Sanchez vs Olga Julio. Montiel is past his best, but he fights regularly at least, for now. He says he'll retire if he loses. He's arguably lost 3 of his last 4 anyways...