In the first edition of the BLH Fight Movie Review, we take a look at the new Blu-ray edition of Bruce Lee's iconic Enter the Dragon from 1973.

This is going to be a new, semi-regular (occasional is probably more accurate) feature here on BLH. Sometimes we get to talking about boxing movies in the fight threads or whatnot, and I was recently offered the chance to review the newly released 40th Anniversary Ultimate Collector's Edition Blu-ray of the legendary Bruce Lee film Enter the Dragon, so I decided this would be as good a jumping-off point as anything to bring movie reviews to BLH. Mostly, we'll talk about old movies, but I suppose if anything new comes along that would qualify, we'll do those, too.

And for the record, this obviously won't be just about boxing movies. That would be too limiting, and sometimes I can't stomach the idea of watching another boxing movie. Enter the Dragon isn't a boxing movie, but I think it's pretty well-known that Lee was a major influence on a lot of boxers as well as martial artists in the years after his career. We'll get to some of that in a bit, too.

"A good fight should be like a small play, but played seriously. A good martial artist does not become tense, but ready. Not thinking, yet not dreaming. Ready for whatever may come. When the opponent expands, I contract. When he contracts, I expand. And when there is an opportunity, I do not hit. It hits all by itself."

Technical Stuff: I have the old DVD version of the movie, but never saw the earlier Blu-ray release, so I can't compare the transfer to the old Blu-ray, but this is a new transfer, and not just a new release of the prior hi-def version. The picture quality is as good as you're going to possibly get for a movie released in 1973, and sound-wise, the score and cornball fight effects jump out really nicely. The dubbing is a little weird, but that's life. 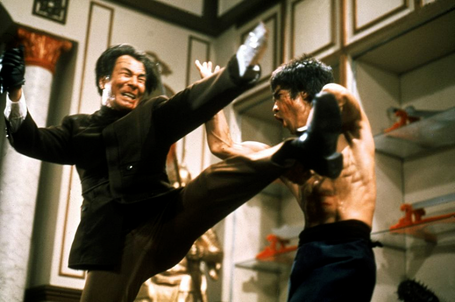 The Movie: Have you never seen this movie? What's your problem then, you big dummy? This is a legitimate martial arts classic, a film that really pushed the genre into Western culture, and the final performance for Lee before his untimely death. Lee would become an iconic global star. It's not as if you're going to compare Bruce Lee to Marlon Brando or anything, but he had a natural charisma and attraction, a star quality that can't be duplicated. There is only one James Dean, one Marilyn Monroe, one John Wayne, one Bruce Lee. There are better actors, but there is an "it" factor, same as in boxing, that drives someone from star to superstar. Lee had that in a major way.

If you have seen the movie, you know that the plot is, um, kinda stupid and mostly thin. That's just how it is. If you haven't seen the movie, now you know to not go in expecting some legitimate great epic of a film. This is a movie, as most in the genre are, where the reason to watch is less what happens and more the way it happens. The choreography is superb, Lee is an athletic force of nature, and you also have a memorable role for Jim Kelly, who declares "Bullshit!" on the proceedings in maybe my favorite scene of the entire movie.

Also, John Saxon's hairpiece is out of this world, and his fight scenes are remarkably bad compared to guys like Lee and Kelly, who actually know what they're doing. I remember reading somewhere that Saxon's toupee should have been given a credit for the film. That statement is right on. 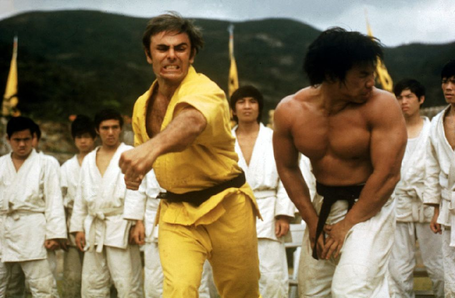 Extras: It's not as if Lee's fighting itself influenced boxers, but his style had a major impact on all forms of fighting, including the sweet science. And I don't mean the physical style, although Lee's confident shuffle is reminiscent of the showboating trotting we've seen from many over the years, including Roy Jones Jr and Sugar Ray Leonard for more contemporary names.

In a new feature for the Blu-ray set, "No Way as Way," Leonard joins George Takei, Steve Aoki, and others in discussing the inspiration and legacy of Lee, and their own experiences with some of the values of Lee's philosophies. Leonard sounds positively Lee-esque when talking about his boxing career:

"When I was boxing, I wanted people to see it as an art, and not just banging, just punching. It is an expression of one's self. It's not even what you know, your knowledge. It's also from the heart, from the mind, the spirit. I've always believed that."

Takei notes that Lee was a major influence on Asian culture becoming more accepted in mainstream America, and changing the long-held stereotypes for Asian and Asian-American actors:

"Bruce Lee made a tremendous impact on me and also on the American, if not the world psyche. He was an action hero when we'd been saddled with all these one-dimensional stereotypes. The servant, the buffoon, or the enemy. Here he was, a terrific build, incredible acrobatic athleticism, and heroic. He was someone that Asians could be proud of, and the potential for the first bankable Asian-American movie star. It was a source of great pride." 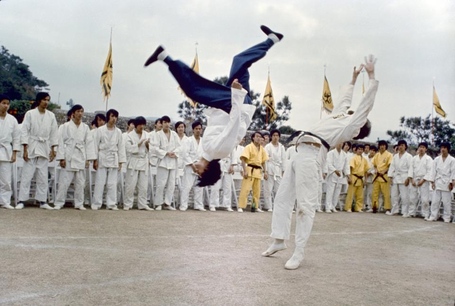 "I look at Bruce Lee and he is one of a kind. There will never be another Bruce Lee. ... People would talk about Bruce Lee forever, because of what he -- not just what he did, which was amazing, not just because of his style, which was amazing. It's because of what he stood for and what he symbolized. ... There's really no one word that would justify what Bruce Lee was and to describe him. But if I had to use one word, I would say 'gifted.' Because he was a gift to a lot of people, to millions of people around the world."

Aoki is correct when he says that the "swagger" of Lee to this day has not been matched, and attitude, swagger, all that stuff has become an integral part of making boxing stars, or athletic stars in general. Being good is no longer good enough; if it was, then Tim Duncan would have a shoe contract like Derrick Rose has, because Duncan is one of the greatest players of all-time. Greatness is more than enough to succeed and live on as a legend. Take Bernard Hopkins, a Tim Duncan-esque boxer -- he got it all right, he did things largely quietly, and it sort of snuck up on a lot of folks that he was as great as he was.

But with a Lee, or for a contemporary boxer, a Mayweather or Pacquiao, there's more to the puzzle, and that's what makes them the megastar. I've often thought to myself that Bruce Lee, in some way, opened a door for Manny Pacquiao decades later. Imagine there had never been a Bruce Lee; would Manny Pacquiao, a Filipino who topped out as a welterweight, have become such a huge star? Hey, maybe. Manny deserves his own credit for his success, of course. But I think that sort of aura that Lee created, when Pacquiao was at his best, he had some of that. Mayweather and Lee don't really resemble one another spiritually or philosophically or whatever, but Lee jumped off the screen at you. Mayweather has some of that. Ali had that. Oscar had it, to a degree. Leonard, Hearns, Duran, Hagler, Pacquiao, Jones, Chavez -- they had some of that. There are those intangible personality traits, whatever they are, the sort of glint in a star fighter's or star actor's eye, the way they move, even when it's just walking, or even just the way they sit, the way they carry themselves physically and with their facial expressions and body language -- those are the things, these indefinable, natural qualities that surround the talent and the ability, and make something more.

Blu-ray Rating: A. Sound is great, picture is great, the extras are solid. There are plenty of additional cool things -- collectable cards, etc., in the packaging. And the box art itself is pretty killer.

Movie Rating: B+. I'd give better movies worse grades, probably, but who cares? This ain't science. That's what I give this movie. Take it or leave it, chumps.

Enter the Dragon 40th Anniversary Ultimate Collector's Edition was released on June 11, 2013. Own it on Blu-ray. Full disclosure: The reviewer was given an advance review copy of the Blu-ray DVD. Photos courtesy Warner Bros.