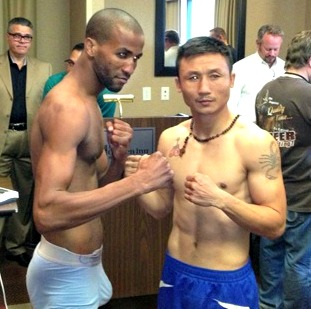 The weights are in for tomorrow night's edition of ESPN Friday Night Fights from Minneapolis, featuring a super featherweight title eliminator in the main event, and local attraction Caleb Truax facing Chicago's Don George in the co-feature.

The main event, an IBF eliminator, will be between Cuba's Rances Barthelemy (18-0, 11 KO) and Thailand's Fahsai Sakkreerin (39-3-1, 21 KO), who has been elevated to this fight mostly due to wins over opponents with incoming records of 14-9-2, 23-27-5, and most recently, 7-20-2. His most notable fight was probably a 2011 loss to Martin Honorio in the Philippines, which as also an IBF eliminator.

The co-feature bout between Truax (21-1-1, 12 KO) and George (24-3-2, 21 KO) is well-matched and will be the real draw for those attending in person. Truax, from Osseo, Minnesota, is a veteran of the local circuit, and has won three straight since a near-miss against Jermain Taylor in April 2012, where he was mostly outboxed but did floor Taylor in round nine.