It's a busy weekend for boxing all over the world, with big televised cards coming from San Antonio, Macau, Tokyo,

TBS (Japan), 8:20 am EDT, Koki Kameda vs John Mark Apolinario. Koki is back again to defend his WBA bantamweight title, which he's held since 2010. His last two fights have been very debatable split decision wins at home over visitors Hugo Ruiz and Panomroonglek Kaiyanghadaogym. He's popular and polarizing, so he's got value, but he often looks a lot more like a propped-up local star than a legitimate top-level fighter. Apolinario is a 23-year-old Filipino whose last two fights have been a pair of draws against Roberto Vasquez. He's 1-0-3 in his last four. BLH may have live coverage.

FOX Sports 3 (Australia), 6:00 am EDT, Lucas Browne vs Travis Walker, Blake Capparello vs Daniel MacKinnon. Browne is coming off of a win over sad old James Toney, while Walker is subbed in for Richard Towers, and is probably a better opponent anyway. Walker can bang and he's pretty fearless, so this could be dangerous for Browne, UNLESS THE FIX IS IN!?!?!? RIGHT YOU GUYS?!?!?! THE FIX?!?!?!

ESPN2, 9:00 pm EDT, Juan Carlos Burgos vs Yakubu Amidu, Josenilson dos Santos vs Miguel Gonzalez. Burgos was originally supposed to face Daulis Prescott, who had to pull out due to kidney stones. For 11 days notice, they did OK securing Amidu as the replacement opponent, though the Ghanaian has lost his last two fights and has never beaten anyone, like, good or anything. HIs best win is probably John Revish. Dos Santos hasn't lost a fight since a competitive decision against Diego Magdaleno back in 2009, while Gonzalez is a familiar fighter at this level.

TopRank.com, 6:00 am EDT, Zou Shiming vs Jesus Ortega, Juan Francisco Estrada vs Milan Melindo, Evgeny Gradovich vs Mauricio Munoz, Andy Ruiz Jr vs Joe Hanks. The Top Rank stream will have the undercard bouts up to a certain point (there are plenty more fights on the show). Other than that you're on your own to find the show live, I guess. HBO2 will have tape delay of Zou-Ortega, Estrada-Melindo, and Gradovich-Munoz at 5:30 pm EDT that afternoon, and Ruiz-Hanks will be on UniMas later Saturday night. We will absolutely not be avoiding "spoilers," because again, sports are live and that's the way the cookie crumbles. That's, like, life, you guys. BLH will have live coverage of the full card.

Eurosport (UK), 3:30 pm EDT, Odlanier Solis vs Yakup Saglam. HEY HEY HEY, IT'S OOOODLANIER. To be fair to the big guy, he did get himself down to 255 for his last fight, a win over a 38-year-old former shot put and football backup that went the distance and was closer than it should have been if we're going to consider Solis some kind of possible contender, which realistically, is anyone still doing that? I mean I know he obviously showed the great game plan to dominate Vitali in their three minutes of ringtime, before he fell over on himself and screwed up his knee, but let's start getting REALLY REAL: he's 33, he's often well out of shape, and he doesn't seem to much care. All hopes that this very talented fighter would be a real pro factor are probably gone. He's like Audley Harrison, except Audley generally tried his best. Saglam shouldn't be a threat but Leif Larsen shouldn't have been winning rounds, either. BLH might have live coverage.

SHO / BoxNation (UK), 9:00 pm EDT, Andre Berto vs Jesus Soto Karass, Keith Thurman vs Diego Chaves, Omar Figueroa vs Nihito Arakawa. YYAAAAAAYYYYY, PRIME TIME BOXING RETURNS TO THE CHANNELS WE PAY FOR, OR AT LEAST THAT I PAY FOR AND THAT YOU MIGHT NOT, #BOXINGFRIENDS! Berto-Soto Karass is not an ideal Showtime main event or anything, but it should be a really good scrap. It's also possible that Berto will beat the shit out of JSK and finish it early, because he's been known to do that with overmatched foes. That's when Andre looks the most awesome, when a guy is ready, willing, and unable. Figueroa is always a blast and one of my favorite rising young stairs, and then there's Thurman-Chaves, which is a significant welterweight fight and will leave us with a legit title contender. I'M JACKED YOU GUYS! GET OUTTA MY WAY! AHHHH I'M IN THE ZONE belly-to-belly anklelock anklelock anklelock DQ BLH will have live coverage. 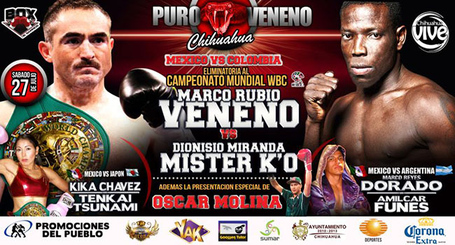 Televisa (Mexico), 11:00 pm EDT, Marco Antonio Rubio vs Dionisio Miranda. If Rubio wins, he'll probably head into a rematch with Julio Cesar Chavez Jr, because the WBC has the world's most inexplicable boner for Marco Antonio Rubio, who is an OK fighter and all, but good gravy, how many chances does a fighter need? By the way, that's definitely Edison Miranda and not Dionisio Miranda in that banner, but I didn't make it. Dummies.

TV Azteca (Mexico), 11:30 pm EDT, Cristian Mijares vs Cristobal Cruz. It's a fight between two guys you're very familiar with who have held world titles and the winner will hang around looking for another big shot, and the winner will quite likely be Mijares, because he's better.