This Saturday night's NBC Sports "Three to See" show from Main Events features a trio of veteran fighters in what are meant to be showcase bouts, but are any upsets on tap?

Share All sharing options for: 'Three to See' fight preview: Adamek vs Guinn, Chambers vs Mchunu, Stevens vs Roman

Tomasz Adamek, Eddie Chambers, and Curtis Stevens aren't prospects. These are all experienced fighters who have taken losses, come back, and are now looking to reestablish themselves and move up the ladder in their weight classes. On Saturday night, the trio of Main Events talents will be featured on an NBC Sports (also BoxNation in the UK) tripleheader in fights that are designed to be showcases, but each of them with some potential for a slip-up.

Let's take some quick looks at all three fights, and examine just how much possibility there is that we might see an upset on Saturday night from the Mohegan Sun. BLH will have live coverage on Saturday night, starting at 10:30 pm EDT. 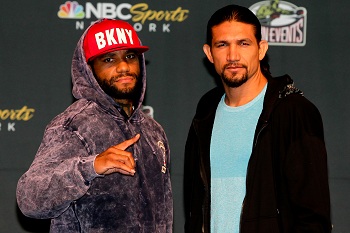 Stevens, 28, has gone 3-0 since joining the Main Events team last year, winning a pair of fights in 2013 against well-known veteran gatekeepers Elvin Ayala and Derrick Findley. While Ayala went down in just 70 seconds in January, the extremely tough Findley was able to go eight full with Stevens and give him some problems in April. 33-year-old Roman doesn't have the chin of Findley, perhaps, but he's a better offensive fighter, and is definitely a bigger puncher.

Roman has been around the block a few times in his career. Even his early career losses as a youngster in Mexico came against guys who went on to become very credible fighters in Jesus Soto Karass and Marco Antonio Rubio. Outside of a TKO-4 defeat against a guy named Daniel Stanislavjevic (8-18-3 career record) in 2007, he's never lost to anyone who can't fight, with defeats coming against Sergio Martinez, Gabe Rosado, Vanes Martirosyan, and others. That doesn't exactly bode well for him against Stevens, who can fight and has some real power, but it certainly indicates that he's no pushover. A win over Stevens would arguably be a career best for Roman, whose better wins at this point have come against the likes of Hugo Pineda, Kassim Ouma, a very faded Yori Boy Campas, Michael Medina, Richard Gutierrez, and most recently, Jose Pinzon.

In other words, Roman can beat guys who are mediocre (Ouma was sliding into a rough patch when he lost to Roman, too) or maybe slightly better than that, but he's never beaten a really serious contender, a true high-quality opponent. If Stevens is going to contend in this division, and talk about fights with titlists like Sergio Martinez, Gennady Golovkin, and Peter Quillin, he has to win and look good doing so on Saturday, at least if he wants his challenges to be taken seriously.

Stevens has had something of a stop-and-go career thus far, making him a little harder to read than the average 28-year-old, nine-year pro might be. His top win to date is probably still a TKO-3 smashing of Piotr Wilczewski, who would go on to give James DeGale all he could handle and also provide a less than easy night for Arthur Abraham (despite the scoring). He may still be best-known as the short, powerful-looking guy whom Andre Dirrell danced away from all night in a 2007 HBO fight, leading to Lennox Lewis' all-time worst comparison of that night's putrid Dirrell and Muhammad Ali, wherein Lennox saw good qualities in the way Dirrell boxed. This was absurd, and something I'll never forget hearing. It blew my mind. It still does. Lennox is a great guy and was a great fighter, but what an awful commentator.

Anyway, this is must-win for Stevens, obviously. And he's definitely been booked into a fight he's supposed to win. But like a lot of what Main Events has done with their "Fight Night" series since it debuted in 2012, this is a fight where sure, there's a clear favorite, and it's the house fighter, but this matchup has not been made without there being at least some risk that their guy could lose. It's very possible that Stevens will spark Roman in the first three rounds or so, and look like a monster puncher. It's also possible that Roman catches Stevens and puts his lights out, too. There is some useful danger in this fight. 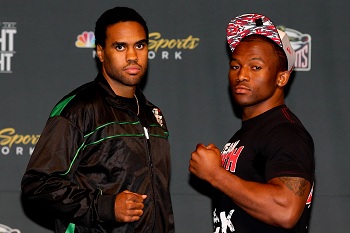 For years, fans and pundits wondered when Eddie Chambers would move down to cruiserweight. As talented a boxer as he is, Chambers generally came up short at the higher levels as a heavyweight, largely because he was just too small. Back when he was trying to pack 220 or so pounds onto his frame, he looked a little soft and flabby, not because he was out of shape, but because he was just trying to carry too much weight, in order to have a little more mass against the big boys.

When he started dropping weight and fighting leaner at about 210 pounds, he looked physically better, but a loss to Wladimir Klitschko in 2010 was totally one-sided, most memorable for the late, great Emanuel Steward basically demanding that Wladimir finish off the smaller man before the 12th round began. Wladimir obliged, proving that he probably could have done that at any point during the fight. Chambers was last seen in June 2012, losing a controversial decision to Tomasz Adamek. Not only did Chambers fight with one arm and outbox Adamek to many sets of eyes watching that night, but he was down to a career-low 202 pounds on the scales, and he looked in very good shape.

With that loss, and the fact that any return to contender status at heavyweight probably would have been ultimately fruitless in the end, besides a potential major payday, Chambers decided to just go ahead and move down to cruiserweight for his return. He makes his debut in the division on Saturday night, facing 24-year-old southpaw Thabiso Mchunu of South Africa.

Chambers has always been a skilled boxer, one of the better talents in the heavyweight division, and most figured he'd have been at least a top contender as a cruiserweight, if not a potential division ruler. At 31, "Fast" Eddie still has plenty of time to make his mark in the division. We'll see how his body responds, as he's had plenty of nagging little injuries over the years that could be an issue at any time.

As for Mchunu, there's nothing to see with his record. He's had some domestic-level wins in his native country, notably (however notable it is) beating Flo Simba twice. He's shorter than Chambers, who comes in at 6'1", and his favorite way to promote this fight on Twitter has been to call Chambers "gay" a lot, which is really promising. The biggest risk here is probably Chambers himself just not being ... himself. That sentence sucked. It's expected that Eddie, a polished, experienced pro, should outclass Mchunu. But if Chambers isn't 100% physically, or is really rusty, or Mchunu is a better puncher than expected, there could be some trouble here. It depends a lot on Eddie, or at least that's how I'm reading the fight at the moment. 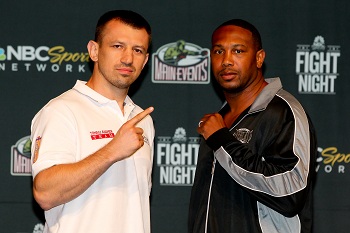 Hear me out. This is actually a risky fight for Adamek. Most people won't see it that way.

Here's the thing, though: it's not that I think Guinn, at 38 and long past his days as even a busted prospect, settled in now as "guy who fights sometimes," is a real danger to Adamek. The Polish star is a much better fighter. I have no argument against that fact. But is Adamek, at 36 himself, just getting so far past it that anyone even semi-credible is a danger to him?

I think that he may be. I didn't like how Adamek looked in any fight he had last year, and he put himself through four fights in 2012. He wasn't really impressive against Nagy Aguilera, survived a scare against Travis Walker, and also had a couple of very debatable (at best) wins over Chambers and Steve Cunningham, the latter in my opinion a flat robbery.

This all started, more or less, with his one-sided defeat against Vitali Klitschko in 2011. Adamek was never close in that fight and all he did was take a beating from a much bigger, much stronger man who also happens to be a better boxer. But even before that, at moments in fights against Michael Grant or Jason Estrada, Adamek never totally looked legit as a heavyweight. He's a winner because he's a good fighter and, again, extremely tough, but he's always seemed like a visitor in the division.

Guinn was a hyped American prospect once upon a time, about a decade ago. His bubble was burst in 2004 against Monte Barrett, and he never really recovered from that, going on to win some and lose some for the remainder of his career, which is now at a point where he's usually just signed up as a warm body for guys like Kubrat Pulev, Denis Boytsov, or Amir Mansour to beat. He did win his last fight, a club bout in June 2012 in Texas.

Guinn can still punch a little, but even more than the fact that Adamek is a more skilled fighter, I don't think Guinn has a lot going mentally anymore; not that he's a dummy or "weak," just that he's so long ago been revealed as a non-contender that one wonders if he has the hunger deep down to not lose this fight. If Adamek gets any momentum, is Guinn going to dig in and find another gear? I don't think it's likely. He barely won a round against Pulev, Boytsov, or Mansour. Adamek is still plenty good enough to wipe Guinn out, but that says more about Guinn than it does Adamek. There is, as always, that minor chance that Adamek will get caught or just get too old in this fight. If he has any notable problems with Guinn -- even in victory -- then his status as a "contender" should be truly questioned going forward.