Mike Alvarado and Ruslan Provodnikov are officially ready to go on October 19, when the two will main event a night of live boxing on HBO from Denver, where Alvarado will return home a conquering hero to face another dangerous, aggressive, hard-punching foe.

Alvarado (34-1, 23 KO) won the interim WBO lightweight title against Brandon Rios in March, and his fight against Provodnikov (22-2, 15 KO) will be for the full title, which was most recently held by Juan Manuel Marquez, who obviously has no plans to move back down to 140 any time soon. (Marquez, in fact, also never really won the full title, beating Serhiy Fedchenko for the interim belt, then never defending that. The full title has actually not been fought for or defended since November 2011, when Timothy Bradley defended it for the last time against Joel Casamayor. Bradley defends the WBO welterweight title against Marquez the week before Alvarado-Provodnikov. Circle of life, you guys.)

"Denver just got its Super Bowl in boxing. I'm so excited," said Alvarado. "I am going to adjust my training technique and battle plan because there are different challenges from Ruslan Provodnikov compared to fighting Brandon Rios."

For Provodnikov, this is a big opportunity in his more natural weight class, following an incredible fight against Bradley for the welterweight belt in two weeks before Alvarado beat Rios in their rematch. Provodnikov was maybe a couple punches away from the big upset, but settled instead for a performance that landed him another big fight.

"I'm glad that Alvarado finally agreed to this fight," said Provodnikov. "This will be an unforgettable fight for the fans. I will not disappoint my team and my fans."

"Boxing fans have been craving for this match up," said Todd duBoef, president of Top Rank. The fighters' styles make for boxing's in-ring perfect storm."

"I'm very excited about the fight and glad that Bob Arum and Todd duBoef were able to close the deal with Alvarado," said Art Pelullo, president of Banner Promotions and Provodnikov's promoter. "I think it's a great fight for boxing. It's what we need. Ruslan was very close to beating Tim Bradley. We think he can win the fight. We know it's going to be an exciting fight no matter what happens."

"Mike Alvarado vs. Ruslan Provodnikov is a fight fan's fight that will deliver non-stop action from the moment the first bell rings," said Peter Nelson, director of programming, HBO Sports. "The fight crowd in Denver and those tuning in to HBO on October 19 are in for a memorable night of boxing. We are grateful to both fight camps for accepting the bout."

Here's the poster for the fight: 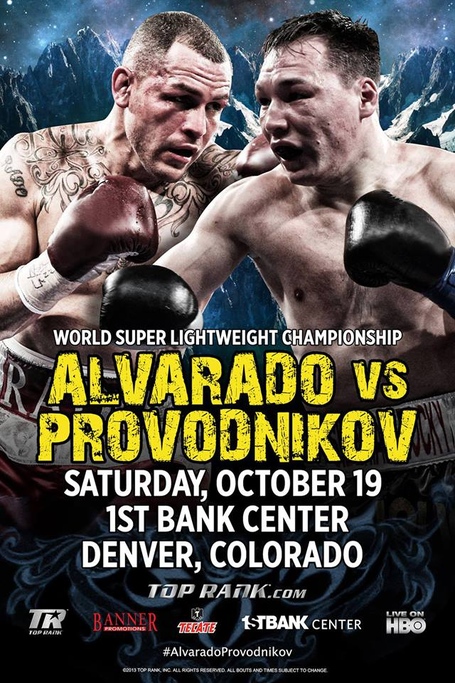