Should Daniel Geale still be wearing the IBF middleweight title belt? Controversial 12th round scoring gave the fight and the title to Darren Barker last night.

Share All sharing options for: Geale vs Barker: Questionable 12th round scoring swung fight to Barker

Few have any issue with the fact that Darren Barker left Atlantic City last night with the IBF middleweight title after beating Daniel Geale by split decision. As for the method that landed Barker the belt and the win, that may be another story.

What seemed to be a clear 12th round in Geale's favor was scored otherwise by two of the three judges, and one of those wound up swinging the fight in Barker's favor. Judges Carlos Ortiz Jr and Alan Rubenstein each gave the final round to Barker, while Barbara Perez saw it for Geale. 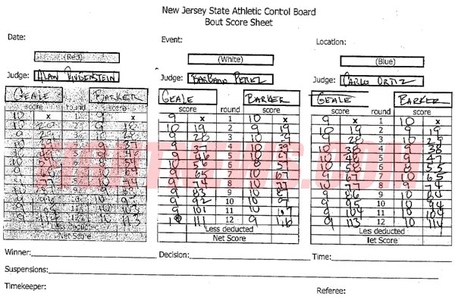 Going into that final round, Rubenstein had it 105-103 for Geale, so he wound up at 114-113 for Geale. Perez had it 107-101 for Barker, giving him the 116-111 win on her card. Ortiz, however, had it 104-104 into that last round, with the winner of the round the winner of the fight on his card, and as it turned out, the winner of the fight period. Ortiz scoring the 12th for Barker is what really gave the challenger the IBF title, and there has to be at least some controversy in that. If he had scored it for Geale, as it seems most people believed was the right call that round, Daniel Geale would have retained on a split decision.

Do you have an issue with Ortiz's scoring of the round (and Rubenstein's, though that did not affect the outcome of the fight)? Based solely on the fact that this is what gave Barker the win, do you think Geale should still be IBF titlist today?