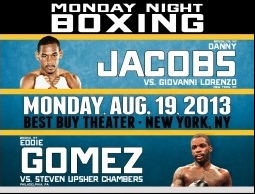 FOX Sports 1, 9:00 pm EDT, Danny Jacobs vs Giovanni Lorenzo, Eddie Gomez vs Steve Upsher Chambers. Here we are, with a brand-new boxing series for your TV pleasure. Oscar De La Hoya insisted on Twitter that FOX Sports 1 is the only place to see Golden Boy boxing and the UFC, which was incredible. This is a decent first card. Gomez is a legitimate prospect, and Chambers is no pushover, so that's fine matchmaking. Jacobs-Lorenzo shouldn't be totally overlooked, either. Jacobs is a better talent, but in all candor, we have not seen yet if he can handle someone who can actually fight. The guys he's beaten in his remarkable and unlikely and inspiring comeback have been patsies. Lorenzo is no star, but he's credible. BLH will have live coverage.

ESPN2, 10:30 pm EDT, Argenis Mendez vs Arash Usmanee, Claudio Marrero vs Jesus Cuellar, Alexei Collado vs Hugo Partida. Mike Tyson is "promoting" this card, in that the company that used to be Acquinity Sports (pushing for Joan Guzman, because no one else cares!) is now called Iron Mike Productions, and Mike is the face of the company. But it's not like he's in there doing the business, you know? I mean, maybe he is, but that's not the impression I get. This is just a way for an ambitious, young company to get some attention. And that's fine. And this is a good card, with Mendez defending his IBF 130-pound belt against Usmanee in the main event, and some good-looking prospects also in action in Marrero and Collado. This is the season finale of Friday Night Fights, which means I'll have to wait a few months to interact with my main man Todd Grisham on Twitter. This is depressing. BLH will have live coverage.

BoxNation (UK) / ARD (GER), 2:00 pm EDT, Juergen Braehmer vs Stefan Abatangelo, Kubrat Pulev vs Tony Thompson, Arthur Abraham vs Willbeforce Shihepo. Pulev-Thompson was a late addition to this card, if you're wondering why the obvious best and most interesting fight of the show isn't on the banner. It's also the real main event, but I think Braehmer outclassing Abatangelo will be the final fight and default actual main event. Abraham will beat up Shihepo and declare himself "back." Wait, should I have said "spoiler alert"? BLH will have live coverage.

SHO / Televisa (MEX), 10:30 pm EDT, Abner Mares vs Jhonny Gonzalez, Victor Terrazas vs Leo Santa Cruz. A fine doubleheader of Mexican action here from the StubHub Center in beautiful (?) Carson, with two world titles on the line. Mares defends his WBC featherweight belt against veteran Gonzalez, and Terrazas defends his WBC super bantamweight belt against rising star (?) Santa Cruz. All I'll say for now -- I'll get more into it later -- is don't sleep on Terrazas. BLH will have live coverage.