Mayweather vs Canelo preview: Tale of the tape and analysis for all four pay-per-view fights

One more look at tonight's four-fight pay-per-view card, including Mayweather vs Canelo and Garcia vs Matthysse.

Share All sharing options for: Mayweather vs Canelo preview: Tale of the tape and analysis for all four pay-per-view fights

Floyd Mayweather and Canelo Alvarez meet tonight on Showtime pay-per-view in a true superfight that has ignited not just the curiosity of the boxing world, but the sports world at large. Make no mistake: this is a huge, huge event.

Since we've previewed the fight inside and out already (more on that at the bottom of this post), let's take a look at the tale of the tape for all four fights, and a little bit more preview thrown in for good measure. 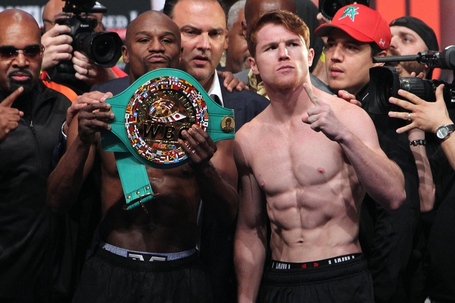 Mayweather has the edge in experience, Alvarez obviously has an edge, if it can be one, in youth. There's no doubt that Alvarez is the fresher fighter; despite fighting just as many times as Floyd has in nine less years as a pro, Canelo hasn't put a lot of wear and tear on his body. Mayweather doesn't have a whole lot of hard fights in his career that punished his body in a standard way, such as we've seen from fellow fighters of his age and generation like Manny Pacquiao or Erik Morales, but he's been through a lot of training camps, and legs are legs. He's got exceptionally youthful legs given his age, but they are 36-year-old legs. And that doesn't even get into his recurring, career-long hand issues, which came up again on May 4 when Floyd beat Robert Guerrero.

The weight figures to be a big factor for Alvarez one way or another. Either draining those extra two pounds in the final days (or even hours) will hurt him, causing him to rehydrate too much before fight time and operate sluggishly, which could be a huge issue, especially given Canelo's still-questionable stamina. Or it won't bother him at all, and he'll have a sizable body mass advantage in the ring. Floyd isn't even close to your average 36-year-old fighter, but Canelo is by far the biggest man he'll have faced in the ring. Whether that helps or hurts Alvarez remains to be seen. 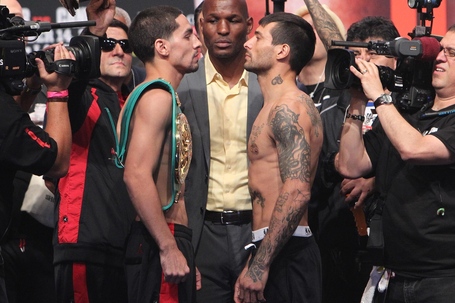 Garcia has some advantages here. He's a little taller, and he might be the better technician of the two, though I think Al Bernstein of Showtime Sports sort of oversimplified this matchup yesterday at the weigh-in when he described it as technician (Garcia) vs puncher (Matthysse). That sells short the power of Garcia and the boxing skills of Matthysse, both of which may be getting totally overlooked or at least underrated in the build-up to this fight.

Matthysse has taken the two losses, but as everyone but Angel Garcia understands, neither of them were exactly clear-cut defeats. His loss to Zab Judah was at least debatable, but his loss to Devon Alexander was home cooking, pure and simple. Both of these guys are natural 140-pound fighters and looked good at the weight on the scales, and have not had conditioning issues in the past. 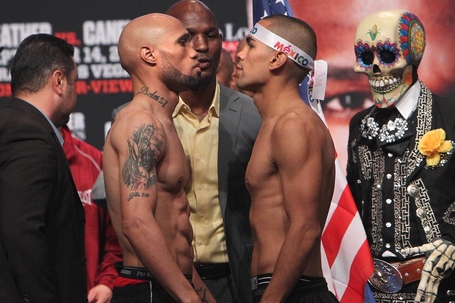 A pair of veterans with records that don't totally tell the story of their skills. Of Molina's five losses, three were by split or majority decison, and one came as the result of a highly questionable disqualification call in Texas against Texas and Golden Boy fighter James Kirkland, after which even Kirkland's trainer told Molina, "You were winning." The other loss was a 10-round decision on scores of 77-74 to Wayland Willingham in 2006. His draws came against Julio Cesar Chavez Jr in 2005 (followed by a six-round majority decision loss to Chavez) and Erislandy Lara in 2011, the latter a fight most felt Molina won.

Smith doesn't have quite the same consistent questionability in his losses, but he gave very tough fights to Danny Jacobs, Fernando Guerrero, and Joel Julio in three of his five losses, and another came to Sergio Mora in a five-round bout on "The Contender" in 2004. His other loss came against Sechew Powell. Smith hasn't lost since 2010, but he's also only fought four times since then. At 35, he's only got 30 pro fights in a 13-year career, and has actually boxed 25 less rounds (203 to 178) than Molina. 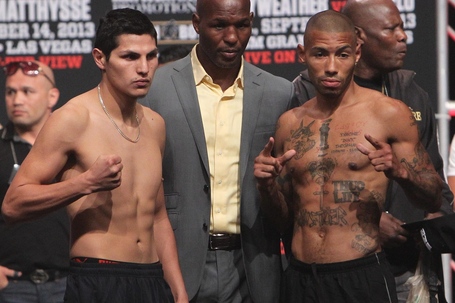 Theophane was once a top-level gatekeeper, and then he went on to win the British junior welterweight title. Much of the talk around Theophane has been about his coming to the Mayweather gym and asking for a shot, then getting in there with Floyd, "and the rest is history," as he signed with Mayweather Promotions. Of course, Mayweather Promotions also has Badou Jack and J'Leon Love as "big prospects," so their talent scouting may not exactly be pristine.

Theophane is a quality fighter, and really his best fight may have been a 10-round loss to Danny Garcia in 2010, which is actually the fight that had me thinking Garcia was just a pedestrian fighter for a couple of years running. Theophane's best official win was over Delvin Rodriguez, but I didn't think he deserved the win in that one. And not being mentioned much is his clear decision loss in 2012 to Darren Hamilton, a domestic-level UK fighter in his mid-30s.

Cano, meanwhile, is younger, figures to be the stronger man (he's definitely a better puncher), and we've seen him give tough fights to Erik Morales, Shane Mosley, and Paulie Malignaggi, with some even feeling he deserved the duke against Paulie, which he did not get. He lost all of those fights, but there's a difference between being good in the gym and being good on fight night. Both Theophane and Cano have shown flashes over their careers, but haven't gotten over the hump. Is the difference going to be that Theophane is 10 years older?