CJ Ross scored tonight's Mayweather-Canelo fight a 114-114 draw. Immediately, the world watching the bout wondered if maybe they had gone into a coma sometime prior to the fight and were now living in some kind of dream world.

Thanks to our friend Luke Thomas who is on the scene in Las Vegas, here's a shot of the official scorecards from tonight's Floyd Mayweather rout (even if not scored that way) of Canelo Alvarez at the MGM Grand Garden Arena. 116-112 was bad enough, 117-111 may even be giving Alvarez too much credit, and 114-114 from Ross is completely insane. Ross gave Canelo four of the last five rounds. Somehow. 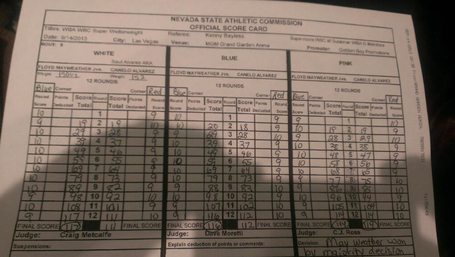 If you can't quite see that, click here for the full image.

Ross, who also scored Pacquiao-Bradley in June 2012 for Timothy Bradley (115-113), needs to have her credibility as a judge seriously evaluated by Keith Kizer and the Nevada State Athletic Commission at this point. It has become beyond tiresome to hear the same old lines such as, "Well, it's different at ringside," which sure, but this different? Not really. "Well, it's a subjective sport." It's especially subjective if you're just plain getting it wrong.

Commissions have to start giving actual reviews of things like this. It happens all the time, and it's inexcusable for a sport that wants more attention and grumbles that people don't always give it a fair shake. How can they when the people so often in control of deciding the outcome seem either incompetent or otherwise suspect?

• How did one judge score fight a draw?

• Mayweather on Canelo: "He will carry the torch"

• After big bout, no follow up in sight for boxing