Billy Joe Saunders faces John Ryder in the best matchup of the weekend, with Dereck Chisora, Frankie Gavin, Wilfredo Vazquez Jr, Roman Gonzalez, and more in action, as well as replays of the Mayweather-Canelo and Garcia-Matthysse fights. 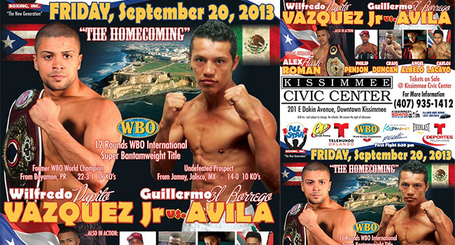 Telemundo, 11:35 pm EDT, Wilredo Vazquez Jr vs Guillermo Avila. WV2 has fallen quite a distance since his career-best, I suppose, win over then-hyped Marvin Sonsona. In the end, we saw a guy who wasn't hyped that much but was a solid fighter beat a guy with a lot of talent, hyped, who didn't want it. Since then, Vazquez (22-3-1, 19 KO) has gone 4-3, losing big upsets to Jorge Arce and most recently Yasutaka Ishimoto. Avila (11-0, 8 KO) is a 21-year-old Mexican fighter of little experience, but WV2 can be really vulnerable.

BoxNation (UK), 2:00 pm EDT, Billy Joe Saunders vs John Ryder, Dereck Chisora vs Edmund Gerber, Frankie Gavin vs David Barnes, Liam Walsh vs Joe Murray, Paul Butler vs Miguel Gonzalez. A really nice main event, and a solid card overall. Saunders-Ryder is for Billy Joe's British middleweight title, an intriguing matchup that pits a pair of unbeaten prospects. Saunders (18-0, 10 KO) has been impressive as a pro, but so has Ryder (15-0, 9 KO), who has not had the same level of hype, and also has not beaten the same type of opposition, but this one could get very interesting. Chisora is back against Sauerland's absurdly coddled Gerber, and Del Boy ought to wreck him. Gerber should have at least two losses instead of the one he does have, which came against Michael Sprott. Maurice Harris deserved the win over him, too. Gavin-Barnes and Walsh-Murray are nice matchups, too. BLH will have live coverage.

SHO, 9:00 pm EDT, (Replay) Floyd Mayweather vs Canelo Alvarez, Danny Garcia vs Lucas Matthysse. Special drinking game: take a shot every time you think CJ Ross has an argument for Alvarez winning a round. You will be stone sober. If you missed the show and haven't found various other means by which to see it yet, I do recommend tuning in to see the performance of Danny Garcia if nothing else. 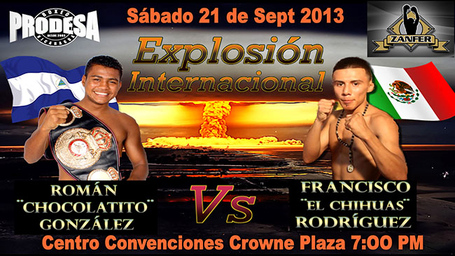