Haye-Fury is off, but there's still some good boxing action on TV this week, including Stevenson-Cloud and the return of Julio Cesar Chavez Jr.

SHO, 10:00 pm EDT, All Access: Mayweather vs Canelo. This is the epilogue episode of the show, as it will cover the September 14 fight night and the immediate aftermath.

Top Rank TV, 6:30 pm EDT, Diego Magdaleno vs Edgar Riovalle, Karim Mayfield vs Christopher Fernandez, Jose Felix Jr vs Joseph Laryea, Matt Korobov vs Grady Brewer, Oscar Valdez vs Joe Morales. There will be other fights streaming on the card, too, which begins at 6:30 and then will continue at 9:00 pm EDT on a second stream. There's plenty of notable names in action and I'm starving for some fights, so we'll be here with live coverage for the entire show. BLH will have live coverage.

Indigo PPV (CAN), 7:00 pm EDT, Adonis Stevenson vs Tavoris Cloud, Jean Pascal vs George Blades, Eleider Alvarez vs Edison Miranda, David Lemieux vs Marcus Upshaw, Kevin Bizier vs TBA, Antonin Decarie vs Cedric Spera. Also on the show will be 2012 Russian Olympian Artur Beterbiev in his second pro fight. It's a solid overall card in Montreal. I was hoping AWE TV (formerly WealthTV) would have the undercard in the States, but alas.

HBO/TV Azteca (MEX), 10:15 pm EDT, Julio Cesar Chavez Jr vs Bryan Vera. Chavez hasn't fought in a year and there's still some concern that he'll actually make weight on Friday, even though this has been pushed back numerous times and the weight has been raised up to a full 168 pounds. Vera might be a little more than meets the eye in this contest -- he's tough, he doesn't go away in fights, he can go the distance with energy to spare, and Chavez has been pushed hard by guys like Sebastian Zbik and Marco Antonio Rubio. This might not be any gimme. BLH will have live coverage.

HBO / Sky Sports (UK), 10:15 pm EDT, Adonis Stevenson vs Tavoris Cloud. The best fight of the weekend now that Haye-Fury is off, as knockout artist Adonis Stevenson makes his first defense of the WBC light heavyweight title against ex-IBF titleholder Tavoris Cloud, whose power hasn't matched his KO percentage against his better opponents. Cloud is coming off of a decision loss to Bernard Hopkins, but he's dangerous here. Stevenson is a vulnerable, all-offense fighter, and Cloud can bang enough. It's a good, interesting fight. BLH will have live coverage. 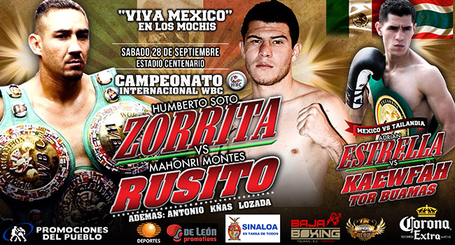