Wladimir Klitschko faces Alexander Povetkin in the marquee fight of the weekend, while Miguel Cotto returns to action on HBO against Delvin Rodriguez, plus much more.

FOX Sports 1, 9:00 pm EDT, Sadam Ali vs Jay Krupp, Michael Perez vs Miguel Zuniga, Marcus Browne vs Lamont Williams. Golden Boy is back with the standard Monday night card, featuring Ali in his GBP debut in the eight-round main event. Perez-Zuniga might be the best fight here. Browne, of course, is a 2012 Olympian who is thus far 6-0 with all wins by stoppage as a pro. 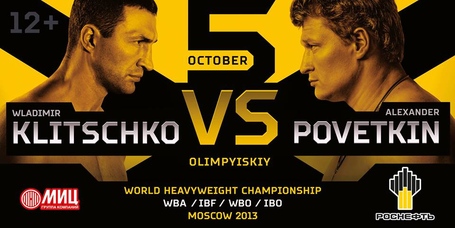 HBO / BoxNation (UK) / TV1 (RUS) Main Event PPV (AUS) / Sport1 (HUN) / RTL (DEU) / PolSat Sport (POL), 3:30 pm EDT, Wladimir Klitschko vs Alexander Povetkin, Mateusz Masternak vs Grigory Drozd, Ruslan Chagaev vs Jovo Pudar, Rakhim Chakhkiev vs Giulian Ilie, Fedor Chudinov vs Marco Antonio Avendano. Klitschko-Povetkin will be covered live here at BLH, as you would expect. It's the most significant fight we're going to see in the division this year, and really could be the most significant we see for a long while. Povetkin has bided his time before finally taking this fight, and Wladimir has not declined like his handlers may have hoped he might by the time they got to him. BLH will have live coverage.

Sky Sports 2, 3:30 pm EDT, Anthony Joshua vs Emanuele Leo, Scott Quigg vs Yoandras Salinas, Lee Selby vs Ryan Walsh, Kevin Mitchell vs Marco Lopez. The 2012 super heavyweight gold medalist in London makes his pro debut on this card, which will also feature bantamweight gold medalist Luke Campbell back in action. Quigg-Salinas is the most significant fight on this card, with a vacant world title on the line, while Selby-Walsh is a domestic title clash. BLH will have live coverage (focus will be on this card during the Klitschko-Povetkin undercard).

HBO, 9:45 pm EDT, Miguel Cotto vs Delvin Rodriguez, Terence Crawford vs Andrey Klimov, Wladimir Klitschko vs Alexander Povetkin (replay). Cotto is back on HBO and back with Top Rank following a pair of fights where he fought with Golden Boy on HBO PPV and then on Showtime, losing last year to Floyd Mayweather and then Austin Trout. Cotto's got Freddie Roach in his corner as he looks to wrap up a Hall of Fame-bound career with three more fights. Rodriguez is meant to be a credible opponent that Cotto will handle without much trouble, after which they might look at a bigger fight. Or not. I don't know. Crawford is a rising HBO product with the in-ring skills, it appears, to match the steady but reserved push. Klimov is a solid scrapper with a win over John Molina. BLH will have live coverage.