Mitchell vs Arreola preview: Heavyweights collide with relevance on the line

Seth Mitchell and Chris Arreola are both products of television hype that was eventually shut down. Now, both of them have their relevant careers on the line when they meet tomorrow night on Showtime.

Share All sharing options for: Mitchell vs Arreola preview: Heavyweights collide with relevance on the line

The search for the next great American heavyweight has been going for years, with seemingly no end in sight. Two of the former hopefuls will meet on Saturday night on Showtime, as Seth "Mayhem" Mitchell faces Chris "The Nightmare" Arreola in a 10-round bout that few expect to go to the scorecards.

Arreola, a 32-year-old Mexican-American fighter out of Los Angeles, was once a fan favorite who gave away some of his public love due to a history of coming in out of shape, giving the impression at times that he didn't care about his career as much as his supporters might have. An amateur light heavyweight, Arreola looked best fighting around 230-235 pounds, throwing a lot of punches, fearlessly engaging his opponents in barroom brawls.

In 2008, he got an HBO shot against Chazz Witherspoon, dominating the fight and winning by third round DQ. But after that, the wheels came off. Arreola ballooned from a weight of 239 against Witherspoon to 258 against Israel Garcia just three months later, looking noticeably out of shape. He looked the same at 254 and 255 against Travis Walker and Jameel McCline, another pair of fights on HBO that led him into a shot against Vitali Klitschko for the WBC heavyweight title on September 26, 2009, where he was soundly routed, his face beaten into a swollen mass closer resembling hamburger meat than human flesh, before the plug was finally pulled after 10 rounds of one-way action. An emotional Arreola gave Klitschko his props, but seemed to know he could have done better than weigh in at 251 pounds, a mild improvement, but one that came, it appeared, from minimal effort to "get into shape."

The late, great comedic actor Chris Farley made his name as a big, fat, surprisingly athletic physical comic. His first big break on Saturday Night Live came in the (in)famous "Chippendales" sketch with Patrick Swayze, something fans loved but his peers didn't as widely enjoy. As his career went on, Farley grew weary of what he called "fatty falls down" comedy, knowing that people enjoyed that, but almost sheepishly driven by a strong desire to do something more.

There has been a hint of the "fatty falls down" thing haunting Arreola's career. After his humbling loss to Klitschko, Arreola talked a good game about focusing harder, not making any more excuses, and getting himself into prime condition to make his next run at a world title. Two and a half months after losing to Vitali, however, Arreola hit a new physical low, weighing in at 263 pounds for a fight against club battler Brian Minto. It's hard to forget the disappointment on Jim Lampley's face and in his voice as he relayed Arreola's official weight for the fight after HBO had aired a short video piece detailing his hard work in the gym and dedication to being better than he had been against Klitschko. 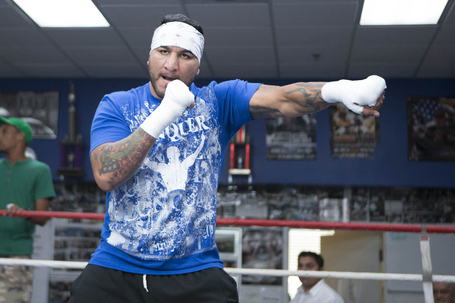 For the most part, Arreola has been able to get by without trying too hard. But his customary post-fight jokes about burritos and Corona grew tired as it became apparent that Arreola could be promoted well, pushed well, and even easy to like, but his was a star not worth wishing on. In April 2010, he dropped a decision to Tomasz Adamek, and though he'd gotten himself back down to 250 for that fight, he was still too heavy, well over his optimum performance weight.

It wasn't until 2011 that Arreola finally got serious. His team devised a plan to keep him in the ring as often as possible, hoping that would minimize the time off between fights where Arreola might reach for the 64 oz. sodas and double orders at lunch.

That activity was a one-year thing, though. After knocking out Eric Molina in 2:30 on February 18, 2012, Arreola missed out on June fight, and wound up sitting out until April 27, 2013, when he was pretty much manhandled by Bermane Stiverne. This time, though, it wasn't weight holding him back. At 247, he was a little heavier than you might like to see from him, but he was just plain eaten alive by Stiverne, who had been off for a year himself, and at 34, wasn't exactly a rising young lion.

The question now is less about Arreola's weight than it is what he has left in the ring. Going up and down in weight, working hard in the gym (sometimes just to be presentable on fight night), and some tough fights have taken a toll. Arreola is well past the part of his career where his future was greater than his past. With his one-sided loss to Stiverne, Arreola is perilously close to being considered an opponent for fighters who have their careers mostly ahead of them, or just being another veteran heavyweight with some name value, hanging around on the fringes of the irrelevant division's relevant scene.

Seth Mitchell (26-1-1, 19 KO) was pushed harder, faster, and with less good boxing reason than Arreola ever was. A former Michigan State linebacker, Mitchell's football career ended in 2005 due to a bad knee. As the story goes, in June 2006, Mitchell saw Tom Zbikowski fight at Madison Square Garden in his pro boxing debut, and was bit by the bug. Zbikowski, a former Notre Dame safety who would go on to have a short NFL career, had some amateur boxing experience. Mitchell came into the sport relatively old and raw.

"Mayhem" turned pro in 2008, and by 2010, was picking up some buzz thanks to his ties with Golden Boy Promotions and Al Haymon. He scored TV wins over Evans Quinn and Timur Ibragimov, displaying a ferocious style and natural charisma that enticed viewers into maybe buying the hype, at least a little bit. The first big red flag came when Mitchell faced the aforementioned Chazz Witherspoon in April 2012. Witherspoon, not a big puncher, had Mitchell badly buzzed, but was unable to finish him off. Mitchell, to his credit, rallied and stopped the Philly fighter in the third round. 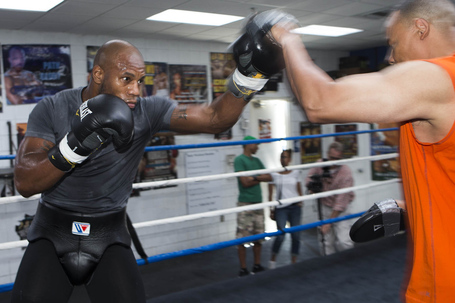 As it turned out, the fight was an omen. Another light hitter, former cruiserweight Johnathon Banks, was more calculating when he hurt Mitchell in November 2012, finishing him off in the second round on three knockdowns. Mitchell was given every chance by referee Eddie Cotton to battle back, or weather the storm, or land the Hail Mary punch, or anything else, but the wise veteran Banks picked him off at every opportunity, and closed the show.

Showing his competitive drive, Mitchell exercised an immediate rematch clause and faced Banks in June of this year, winning a laborious, 12-round decision in Brooklyn. It was not exactly the shining rebound that Mitchell's handlers may have hoped for. While his corner was probably perfectly happy to have Seth rather cautiously box his way to victory against an opponent who opted to do absolutely nothing for the entire fight, the fact that Mitchell has been thrown in against Arreola gives the indication that Golden Boy and Haymon know that Mitchell's time as an attraction is likely limited.

That's not because Arreola is an elite opponent or anything. After all, this is a guy who was thrashed in his last fight, and may be over his career's hill. But Arreola seems all wrong for Mitchell on paper. Arreola can punch, and Mitchell has been hurt or stopped by much lighter hitters in Witherspoon and Banks. Arreola is aggressive, and Mitchell sometimes has trouble containing himself or thinking quickly when the heat is on, opening up an already patchy defense and giving his opponents massive holes through which to throw bombs.

Despite the last loss, Arreola is a legit heavyweight fighter. He's a big, strong guy who comes to fight. Chris Arreola has never tried to get a fight to go past the first round. He certainly won't in any way resemble the Banks of June's rematch, who passively gave the fight away.

Arreola also has to know that he's fighting for his career here. If he loses to Seth Mitchell -- who has the power to stop anyone early, including Arreola -- then he's a journeyman. If he can win, he might buy himself another major chance, possibly down the road a bit against Deontay Wilder, the new hot pick for "next great American heavyweight." (Actually, a loss could get him that fight, too, because it's boxing.)

Mitchell needs the win because it seems the plan is to get him activated into that world title shot sooner than later. GBP and Haymon probably see what they have in Mitchell: an entertaining, limited fighter. There's no reason to dislike Seth Mitchell, who has worked damn hard to become as good as he is in a relatively short amount of time. His life wasn't dedicated to boxing from a young age like most pros, but he's become at least a B-team player as a professional. But if you're a promoter, you have to face facts at some point with any fighter -- when they're washed up, when they're ready to strike, when they need to be coddled, when they need to be thrown into the fire.

Mitchell is being thrown into the fire, sort of the way Victor Ortiz was in 2011 against Andre Berto. Ortiz, finally, rose to the occasion and saved a faltering career. Mitchell's career hasn't been smacked down by any means, but he's lost that buzz. Everyone sees him for what he is, and the dreaming of what could be was given three jolts of reality by Witherspoon and Banks. We saw a guy who can be hurt, a guy who can be stopped, and a guy who last time out, didn't appear very eager to take any risks.

One figures Chris Arreola and promoter Dan Goossen must have jumped for joy when this offer came in. For where he's at in his career, Arreola has a golden opportunity in his hands. Mitchell isn't getting anything easy anymore. It's sink or swim. And Arreola has to be smelling blood in the water.