Canelo Alvarez and Alfredo Angulo are being promised as a "Toe to Toe" matchup for pay-per-view buyers on March 8. Check out the official fight poster.

We're just about six weeks away from what will be the first pay-per-view event of 2014, and by May 3, we'll have already had three of them. Fun, right?! Anyway, the money-draining portion of boxing's schedule begins on March 8, when Canelo Alvarez returns from his first career loss to face Alfredo Angulo, who also lost his last fight, in a Showtime pay-per-view main event from the MGM Grand in Las Vegas.

Here's the fight poster, which is pretty good: 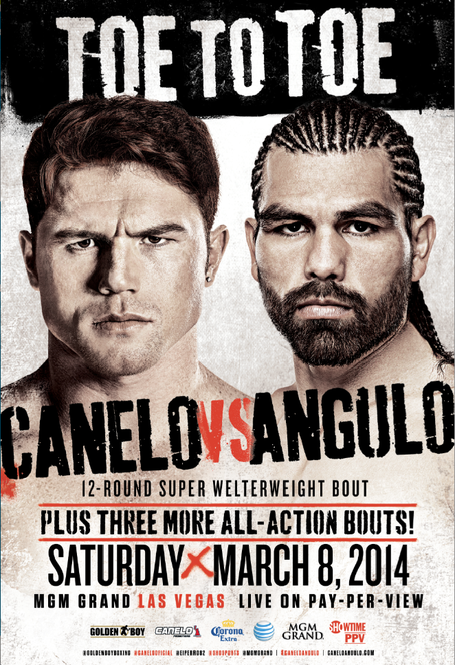 After this one, we'll have Manny Pacquiao vs TBA (likely Tim Bradley) on April 12 from HBO PPV, and then Floyd Mayweather vs TBA (Amir Khan) on May 3 from SHO PPV again. We also appear headed for a June 7 HBO PPV main event between Miguel Cotto and Sergio Martinez. 2013 was a good year for both HBO and Showtime's brands, so now it's time to milk the cow.