It's a busy weekend for boxing on American TV, as there will be five fight cards between Friday and Saturday, with HBO, Showtime, ESPN, FOX Sports 1, and NBC Sports all on the schedule.

ESPN2 / WatchESPN.com, 9:00 pm EST, Thomas Williams Jr vs Cornelius White, Rico Ramos vs Jonathan Arrellano. Williams-White is a solid FNF main event. The co-feature has Rico Ramos so either plan to come in late or make sure you've got plenty of coffee on hand. I understand why he keeps getting low-end TV dates, but I can't understand why any promoter would keep testing boxing fans' patience to watch the show with his lousy fights. BLH will have live coverage.

NBC Sports, 10:00 pm EST, Curtis Stevens vs Patrick Majewski, Thabiso Mchunu vs Olanrewaju Durodola. Stevens is back with a quick turnaround following November's TKO loss to Gennady Golovkin, this time facing East Coast club vet Majewski, who is coming off of a loss in Denmark to Patrick Nielsen. Majewski is a decent fighter, but if Stevens hopes to get back into contention, he can't afford a poor showing here. This is a guy he should knock out. Mchunu earned his way back to NBC SN with a win last year over Eddie Chambers. Durodola has a nice KO rate (17-1, 16 KO) but I know nothing about him otherwise. BLH will have live coverage. 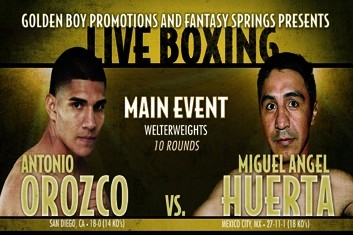 FOX Sports 1, 10:00 pm EST, Antonio Orozco vs Miguel Angel Huerta, Cornelius Bundrage vs Joey Hernandez. Hey! A Friday night tripleheader! Which B-level show will YOU be watching!??!!?! FRIDAY NIGHT BOXING WARZ!!!! Huerta was once a pretty OK fighter, a nice stepping stone sort, but he's fought just once in five years and it was a wide loss to Mauricio Herrera last September. This is a showcase for Orzoco. For Bundrage in the co-feature, a win could get him back into the Golden Boy-led belt mix at 154. BLH will have live coverage.

BoxNation (UK) / ARD (DEU), 1:00 pm EST, Marco Huck vs Firat Arslan II, David Price vs Konstantin Airich, Marcos Nader vs Emanuele Blandamura. Huck narrowly defeated the aged Arslan back in December 2012, and their rematch has been in the works for a while, postponed once. Arslan, 43, is probably getting the last world title shot he's going to get if he loses. Price is back in the co-feature, his own return delayed from December. Airich is a punching bag, basically, but Price's chin and confidence are suspect. BLH will have live coverage.

SHO, 9:00 pm EST, Lamont Peterson vs Dierry Jean, Jermell Charlo vs Gabriel Rosado. Peterson-Jean is flying under the radar but could be a really good fight, and though Jean hasn't had a lot of TV exposure in the States, he's a very live dog in this one. Lamont's a good fighter, but vulnerable, and he hasn't fought since Lucas Matthysse smashed him to bits last May. The Charlo-Rosado co-feature should be a nice test for Charlo. Rosado's career has circled back to being an "opponent," but a win here and he's more than that yet again. BLH will have live coverage.

HBO, 9:45 pm EST, Mikey Garcia vs Juan Carlos Burgos, Bryant Jennings vs Artur Szpilka. This is supposedly the last of these "showcase" fights that HBO is going to accept from Top Rank for Garcia. He's the heavy favorite against Burgos, a good fighter who is coming off of back-to-back draws against Rocky Martinez (a fight many of us felt Burgos won) and Yakubu Amidu (a short-notice opponent Burgos didn't have to fight who was bigger and presented a tough matchup). Garcia appears to be the real deal as a fighter a level or maybe two above Burgos, but he still has to go out and do it. Jennings-Szpilka could be a really entertaining heavyweight fight. Jennings will throw, especially if pressed, and Szpilka is a fearless brawler. BLH will have live coverage. 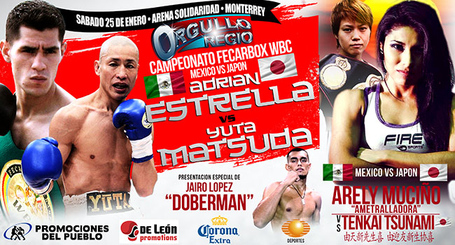