Victor Ortiz returns to the ring for the first time since mid-2012 on Thursday night, Gennady Golovkin is back on Saturday, and Anthony Mundine takes to the ring on Wednesday in a busy week of boxing.

Main Event PPV (AUS), 3:30 am EST, Anthony Mundine vs Gunnar Jackson, Renold Quinlan vs Joel Casey. Capitalizing on his earth-shaking win over Shane Mosley, Mundine (45-5, 27 KO) looks to take that FINAL STEP FORWARD toward the money showdown with Floyd Mayweather that the world demands by facing Gunnar Jackson (18-4-3, 6 KO), who is currently ranked 137th in the world by BoxRec among the planet's middleweights. 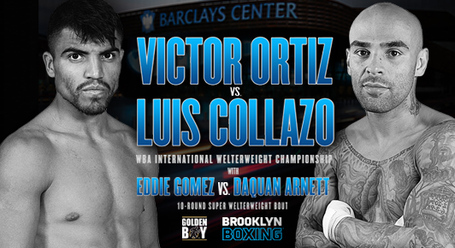 FOX Sports 1, 9:00 pm EST, Victor Ortiz vs Luis Collazo, Eddie Gomez vs Daquan Arnett. Thursday night boxing! And a damn good card, to boot! Ortiz (29-4-2, 22 KO) hasn't won a fight since April 2011, so we're effectively talking three years, and he hasn't been in the ring since June 2012, when he retired after nine nasty rounds with a broken jaw against Josesito Lopez. Ortiz is an airhead and a bit of a weirdo, but he reminds me of Lou Whitaker without the consistency. Sure, sometimes Lou Whitaker forgot to bring his jersey to the All-Star Game and had to buy a replica at the souvenir stand, and sure, sometimes Lou Whitaker got so freaked out by an airplane buzzing the stadium he had to leave the game, but he was a damn good player. And Ortiz can fight. Collazo is a tough ask on a comeback from a long-term absence, though. Luis can box, he's awkward, and he's a fellow southpaw. Ortiz should win this fight. He might not, though. There's a real chance he won't. The co-feature is terrific -- Gomez (15-0, 10 KO) is one of Golden Boy's top prospects, and if you've ever watched boxing on Bounce TV, you know that Daquan Arnett (11-0, 7 KO) is essentially the Lord Almighty reborn with boxing gloves, a PPV superstar and one of the P4P best. BLH will have live coverage.

Main Event PPV (AUS) / SAT1 (DEU) / Sport1 (HUN) / Ma Chaine Sport (FRA), Noon EST, Gennady Golovkin vs Osumanu Adama, Max Bursak vs Jarrod Fletcher, Nkosinathi Joyi vs Rey Loreto, Roman Belaev vs Dean Byrne, Junior Makabu vs Ruben Angel Mino. This is a pure stay-busy payday for WBA middleweight champ Golovkin (28-0, 25 KO), as he faces a non-contender in Adama (22-3, 16 KO), who really has no business in the ring with him. I mean, there used to be major world title fights like this all the time, but those champs fought way more often. Golovkin cuts a rug schedule-wise for a modern fighter, so it's hard to really begrudge him this fight, as it Is What It Is!! and all that. It's a gimme for him and he'll wreck Adama, who is not even close to on GGG's level. The rest of the card is solid and worth a watch. Hopefully, we'll see beIN Sport in the U.S. or at least BoxNation step in to pick this fight up and give us another option. Can WatchESPN hook up a cheap feed? Anyone? Come on. What are you even doing on Saturday afternoon, Tennis Channel? BLH will have live coverage.

3+ (DEN), 3:00 pm EST, Cecilia Braekhus vs Myriam Lamare, Erik Skoglund vs Adasat Rodriguez, Dennis Ceylan vs Daniele Limone. Braekhus (23-0, 7 KO) is not only best women's boxer on the planet, it's not even a close race. She's heads and shoulders above the competition right now, for the most part. Lamare (22-3, 10 KO) has won six straight since losing to Holly Holm back in 2009.

AWETV / Sky Sports (UK), 3:00 pm EST, Lee Selby vs Rendall Munroe, Gavin Rees vs Gary Buckland, Anthony Joshua vs Dorian Darch. Selby (17-1, 6 KO) will be defending his British featherweight title and facing Munroe (27-3-1, 11 KO) for the vacant European title belt. It's a strong domestic main event, and paired with a nice co-feature in Rees (37-3-1, 18 KO) vs Buckland (27-3, 9 KO) in a battle of Wales that also serves as a British lightweight eliminator. Joshua (3-0, 3 KO) fights for the first time since taking a holiday break, last in the ring on November 14. BLH will have live coverage. 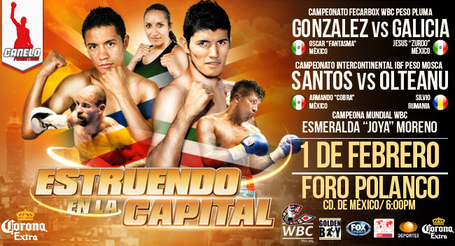