The vast majority of the sports world is focused on Super Bowl XLVIII this week, but some good young fighters in the Golden Boy stable will have to wait until after they're done fighting on Thursday night to really get into the festivities. Victor Ortiz and Luis Collazo are in the headline bout of the FOX Sports 1 televised "Golden Boy Live!" event from Brooklyn's Barclays Center, but there's a solid undercard featuring some talented young prospects, as well.

In the chief support bout, unbeaten junior middleweight prospects Eddie Gomez (15-0, 10 KO) and Daquan Arnett (11-0, 7 KO) will each take a risk in what may really be the most intriguing fight on the show. Gomez, 21, is the house fighter, while Arnett, also 21, hasn't received the same amount of exposure or hype.

Gomez, a Bronx native and resident, says the two have met before.

"We fought in the amateurs," he said on Monday. "I beat him and knocked him down three times. So now we're going back at it again. He's improved a lot but somebody's '0' has to go. We've grown and developed a lot both power-wise and ability-wise."

Arnett doesn't think the amateur fight will mean anything come Thursday. "It keeps coming up, but all I can say is we're men now," he said. "We keep growing up and we'll see what happens on Thursday. We were kids then, running around the ring throwing punches."

The Floridian is confident that he'll be able to roll with whatever Gomez gives him. "I feel like I'm an all-around fighter. I can box, I can punch, I can sit in the pocket and fight inside and outside. The main thing is I can adjust and adapt to anything."

Arnett's best wins to date have been over Brandon Quarles and Dashon Johnson, a couple of tricky pros, with Quarles giving Arnett way more trouble than was likely anticipated. Gomez is coming off of an impressive win over Steve Upsher Chambers in August 2013.

Both fighters, as they will always do, promise a good show.

"I expect a good entertaining fight, something the fans will love to see," Arnett said. "This will get both of us back on TV again. It will definitely be a win on my end."

"You can expect fireworks," Gomez agreed. "I have everything, speed, power and whatever it takes to get the 'W,' I'll be doing it."

Also returning on the bill in the televised opener is stalled featherweight prospect Gary Russell Jr (23-0, 13 KO), who will face another soft touch in Mexico's Miguel Tamayo (15-7-2, 13 KO). The 25-year-old Russell's competition isn't improving, but as usual, he's not worried about what anyone thinks.

"I had a fun training camp," he said. "A lot of people approach this as a job, I understand that but for me, training camp was fun because I'm fighting a southpaw and I'm a southpaw. Anyone who knows me knows that I'm the oldest of six boys and all of us our southpaws. 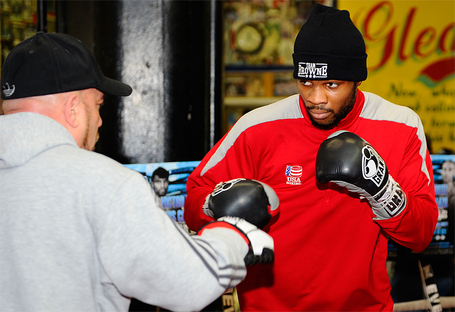 2012 Olympian and unbeaten light heavyweight prospect Marcus Browne (8-0, 7 KO) will also return, taking a bit of a step back in competition in a stay-busy fight against Kentrell Claiborne (4-8, 3 KO). In his last fight, Browne smashed veteran Kevin Engel in one round, and the New York native is making himself a regular in Brooklyn.

"This is my sixth time fighting at Barclays Center and I'm ready to go out and take another step forward in my pro career," he said. "I just have to do what I have to do and keep carrying on with my career." 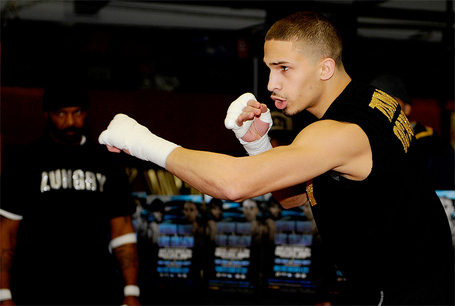 Zachary Ochoa, a recent Golden Boy acquisition, will look to stay unbeaten in a four-round fight. The junior welterweight is 5-0 (3 KO), and says he's looking to get more active now that he's got a top promoter.

"Signing with Golden Boy was a beautiful thing for me. I couldn't really get fights," he said. Ochoa turned pro in September 2011, but has had just five fights in that time, which he says is not due to lack of effort in making bouts.

"For someone with my work ethic who trains all year it was disappointing not to get fights," he said. "But Golden Boy saw something in me and I'm excited they decided to sign me." 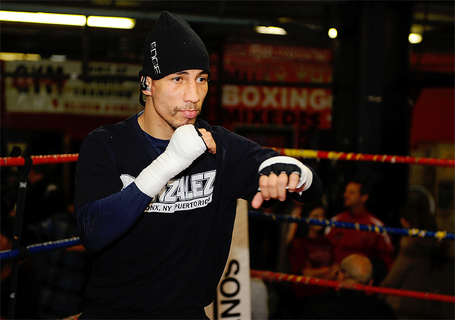 Another prospect set for a showcase is 26-year-old Bronx featherweight Emmanuel Gonzalez (13-0, 7 KO), who will feature in an eight-round bout against Victor Sanchez (5-7-2, 2 KO).

"We have a great main event, great co-main event and I just hope everyone up here is ready," Gonzalez stated. "I know I'm ready and I hope everyone comes out and supports a great show."

One interested observer is former 140- and 147-pound titleholder Paulie Malignaggi, who also serves as an analyst for Showtime Sports as well as other Golden Boy events. The Brooklyn native is a big supporter of the Barclays Center and is one of the central figures in raising boxing's profile in the borough.

"This is such a stacked card for it being in the middle of Super Bowl week here in New York. The whole city is buzzing," Malignaggi said, referring to the fact that Super Bowl XLVIII will be played in East Rutherford, New Jersey.

"I am excited looking at this whole line up, it's really a great card we have here," he continued. "Everything in New York City is electric. It is a perfect time for a card like this. Tickets start at 25 dollars, which you just can't beat."

"Our venue has become a place where the local fighting community aspires to become future champions," said Barclays Center CEO Brett Yormark. "We really want Brooklyn to be a destination for fans that are coming to the New York metropolitan area as part of their plans before the big game on Sunday night."