Crazy Train: The Victor Ortiz thrill ride is back in business on Thursday

Victor Ortiz has been called a lot of things, but "boring" has never been one of them. Still just 27, the enigmatic boxing star returns to the ring after a long absence on Thursday night in Brooklyn.

Share All sharing options for: Crazy Train: The Victor Ortiz thrill ride is back in business on Thursday

The last time we saw "Vicious" Victor Ortiz in a boxing ring, his jaw was shattered, and not for the first time, it seemed as though his career might have been busted, too. (That's just great writing, you guys.)

That night at the Staples Center in Los Angeles, on June 23, 2012, was just supposed to be a "get-well" win for the Oxnard-by-way-of-Kansas slugger, matched against 140-pound also-ran Josesito Lopez, a tough and capable fighter, but a massive underdog nonetheless. Lopez was signed up to lose. Golden Boy Promotions, in fact, had already announced their big plan for September 15 of that year: Canelo Alvarez was to make his pay-per-view headline debut against Ortiz, who in 2011 had won a war with Andre Berto and then lost a fight with Floyd Mayweather via sucker punch after the most blatant headbutt (from Ortiz) that you'll ever see.

Lopez felt the power of Ortiz that night, without question. It was a hard-hitting war, a struggle for survival on both sides. That was probably best case scenario for Lopez, but it wasn't in the script for Ortiz. And as Canelo Alvarez and promoter Oscar De La Hoya hobnobbed with Jack Nicholson, the improbable came to life, as Ortiz was forced to quit after nine rounds, leaving Alvarez and Oscar stunned and wondering just what in the hell to do now.

To call Ortiz a quitter, though, was a bit much. He fought for several rounds with the broken jaw, an injury severe enough that in all reality, it should end any fight immediately. It's the type of boxing injury that can end a career with one more big shot. Ortiz took heat from some fans, though many did recognize the bravery and determination he had shown.

"Was three more rounds such a big deal?" some seemed to ask. The answer is yes. Three more rounds of a trained professional who's in the fight of his life smashing your already fractured jaw is, in fact, a big deal. Ortiz made the only move he could when he threw in the towel. He lived to fight another day. It was not his first loss. It wasn't the last he'll experience in his career, either. For as goofy and off-the-wall as Ortiz can be, he's smart enough to know that foolish pride doesn't do much for you in the long run. Not in a business as unforgiving as professional boxing.

Ortiz will turn 27 on Friday night, a day after he finally gets back into the ring to face tricky veteran Luis Collazo, a former title challenger who has given tough tests to the likes of Ricky Hatton and Andre Berto in his career. Collazo, now 32, isn't the fighter he was in 2006 when he gave Hatton all he could handle. The southpaw has not always been able to keep the most consistent schedule, and it was a surprise to most when he lost to Freddy Hernandez in 2011, particularly in that he lost by decision. 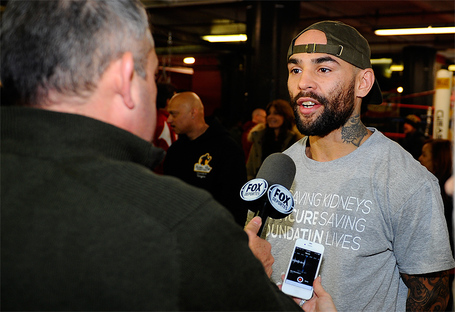 Collazo, though, is a fighter, and knows what this opportunity means to him. He'll be fighting in front of what should be a partisan crowd at the Barclays Center, as the Puerto Rican was born in Brooklyn. He's also working on a three-fight win streak, beating Steve Upsher Chambers, Miguel Callist, and Alan Sanchez in a run that started in October 2012 with Golden Boy's first show at the state of the art venue.

"This fight is for my future," Collazo said at a media gathering this week. "I'm not trying to look past it, but this victory here means everything to me. It means I have a future.

"If not, I have to start all over again from scratch."

Since turning pro in 2004, Ortiz (29-4-2, 22 KO) has never been what you'd call reliable. A volatile temperament has betrayed him twice, most famously against Mayweather in 2011, but also very early in his career in 2005 against a fighter named Corey Alarcon. In a fight he was winning handily in round one, he slugged Alarcon with an uppercut as referee David Denkin tried to separate the two fighters. Alarcon stayed down and Ortiz was disqualified.

It wasn't any major sin, and in the long run, it meant nothing for his career. Ortiz was in the heat of the moment, doing well, and the foul wasn't egregious. But it hinted at what we would see from Ortiz later in his career at times: an inability to stay entirely in control of himself.

Ortiz, to put it lightly, is an odd duck, particularly for boxing. His terrible-luck upbringing has been a main narrative story in the promotion of Ortiz the fighter, though it has been questioned by former gym rival and fellow Kansas-to-Oxnard transplant Brandon Rios, and there's always appeared to be something of a lost little boy in the eyes, smile, gesticulations, and even the fighting style of Victor Ortiz. He had to grow up a lot faster than most of us, had to take on heavy responsibilities at a young age.

Ortiz's laid-back, cool, "surfer dude" sort of persona is what he likes to sell to people, because it's a good sell. There once was a time when it seemed that Golden Boy felt Ortiz could be the next Oscar De La Hoya, which is something they've been searching for since De La Hoya retired. Young, Mexican-American, and handsome, Ortiz has a fan-friendly style, could easily be a hit with the ladies, and is the same kind of oddly off-kilter that Oscar sometimes was. But De La Hoya had himself in check between the bells, something Ortiz has not always been able to do.

When Ortiz quit against Marcos Maidana in 2009, the questions about his future were frankly less questions than dramatic statements that he'd never make it as a top boxer. Ortiz put that idea in the public's heads, however, when he said he wasn't sure he "deserved" to be getting beaten up the way he was that night, an exciting brawl where the then-unknown Maidana made his mark, and once again delayed Ortiz's planned rise to stardom.

Given the four and a half years we've had to process that moment, though, I am reminded of another star athlete, baseball Hall of Famer Robin Yount, the great Milwaukee Brewers shortstop and outfielder. Four years into his career in 1978, Yount suddenly took time away in spring training because he didn't know if he wanted to play baseball or try his hand at professional golf.

Here's what Bill James had to say about that in The New Historical Baseball Abstract:

"When that happened, I wrote him off as a player who would never become a star. If he can't even figure out whether he wants to be a baseball player or a golfer, I reasoned, he's never going to be an outstanding player.

"... But as soon as he returned to baseball, Yount became a better player than he had been before; his career got traction from the moment he returned. What I didn't see at the time was that Yount was in the process of making a commitment to baseball. Before he had his golf holiday, he was there every day, he was playing baseball every day, but on a certain level he wasn't participating; he was wondering whether this was really the sport that he should be playing. What looked like indecision or sulking was really the process of making a decision."

While it's certainly not the exact same thing -- Ortiz wasn't looking at another sporting career or any career in particular, as far as I know -- I think Victor has shown that he is tougher than that interview made many of us believe, myself included. He came back a little slowly, was thrown in with Berto, and proved what kind of a fighter he can be. And though he was being outboxed and outfoxed by Mayweather, he wasn't doing particularly poorly in that fight before he went crazy. The Berto fight showcased the Ortiz of promoters' dreams; the Mayweather fight showcased the Ortiz of fans' jokes.

Yount wasn't a headcase so much as a guy who was a Major Leaguer at age 18, had some second thoughts, bristled at the idea of a position change, and started considering his options while still young. He made his decision, came back, and become one of the great players of his era, a true Hall of Famer. 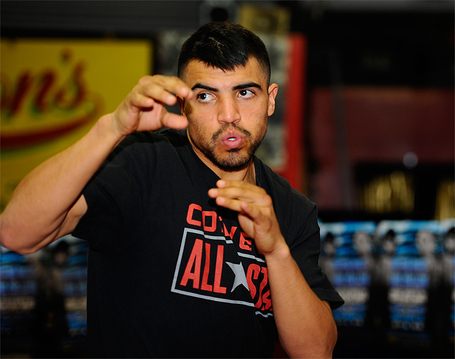 While Ortiz is unlikely to produce a Hall of Fame career, it's also not totally inconceivable. He's still young, theoretically having not even yet entered his physical prime. He was a huge 140-pounder, a pretty big 147-pounder, and he looks to have the frame to carry 154 or maybe even 160 as he gets older. His conditioning has never been a real question, nor his effort. And his talent level is very high. Perhaps not truly elite, but he's a very good fighter in terms of pure ability.

Now, Victor's had his break, the same way Yount had his little break. Ortiz has been away, dabbled in things like "Dancing with the Stars" and endorsements for Facelube, did a little acting, and now, perhaps he's back and dedicated like never before. Maybe as he's about to turn 27, he's gained the focus that comes with maturity. We know he's learned a lot about himself inside the ring. Yes, he quit against Maidana, but he came back stronger. He "quit" against Lopez because broken jaws are goddamned devastating, took his time, healed up, and now he'll try to be better yet again.

Victor Ortiz is easy to poke fun at, easy to laugh about. He says bizarre stuff, he's kind of an airhead in interviews, and he's prone to exaggerations. But he's also a pretty damn good fighter, and if he's got himself mentally where he's already been physically, there's still a lot of future left in Victor Ortiz the professional boxer.

If not, then it's also entirely possible we've already seen the peak days of Victor Ortiz. Collazo is good enough and this fight is on paper risky enough that Ortiz can make an actual statement on Thursday night. Is he refreshed and better than ever, the same old Victor, or is something perhaps gone from him that he can't get back? Layoffs and inactivity can be hell on a fighter, but Victor Ortiz isn't your normal fighter.