The fights are underway in Monaco on today's Golovkin-Adama card. Follow this post for updated results, reactions, and recaps as the fights conclude.

Well, this was pretty fascinating to look at, as Makabu is a properly-conditioned professional cruiserweight and Mino was a little fat guy: 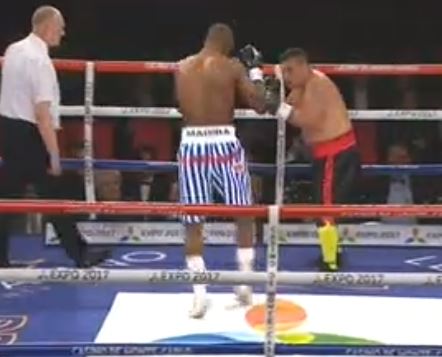 I'm not trying to insult Mino (20-1, 20 KO), who came here to fight and threw what he had, but Makabu (16-1, 15 KO) felt him out for a round and then realized this was stupid, so he flattened him in the second. Mino got up against all logic or odds, which seemed to more annoy Makabu than anything, so Junior stuck him with a short left hand that really finished it moments later.

A big upset, but not as shocking as it might seem on paper. This is two straight big wins for Loreto (18-13, 10 KO), who beat Pornsawan Porpramook by technical decision last August, and he might just be blossoming into a legitimate contender. His record is deceiving and he's only 23 years old. Joyi (24-3, 17 KO) has been past his prime for a couple fights now, and he's 31, which is generally speaking getting pretty old for The Little Guys. Joyi was hurt pretty badly at the end of round two, and then laid pure out by a massive left hand from Loreto in the third to end the fight.