AWE / Sky Sports 2 (UK), 2:00 pm EST, Ricky Burns vs Terence Crawford, John Simpson vs John Murray, Scott Cardle vs Paul Appleby, Anthony Ogogo vs Greg O'Neill, Anthony Joshua vs Hector Alfredo Avila. A dangerous main event matchup for Burns without question, as Crawford is a quick-rising contender in the weight class. That said, Burns is a major step up for the Nebraskan, too. BLH has live coverage.

Channel 5 (UK), 4:10 pm EST, James DeGale vs Gevorg Khatchikian, Lee Haskins vs Elton Dharry. DeGale is back against his normal level of opposition, meaning a guy who doesn't have much chance to win. Khatchikian is 20-0 (8 KO), but he's fought nobody.

HBO / Azteca 7 (MEX) / Main Event PPV (AUS), 9:45 pm EST, Julio Cesar Chavez Jr vs Bryan Vera (rematch), Orlando Salido vs Vasyl Lomachenko. LOOK! HBO has another fight! This is a big fight for Chavez. He's not quite the superstar he was before he lost to Sergio Martinez, then failed a drug test, and then looked lousy against Vera last year, only to get a decision so gifted that he's been forced to rematch a mid-level brawler who was a stretch as an HBO main event fighter the first time around. If he can't convincingly win this one, Chavez will take a real hit. And will he even be in shape? Who knows? Perhaps the more intriguing fight here is the co-feature between Salido and Lomachenko, which is for Salido's WBO featherweight title. This is just Lomachenko's second pro fight -- he's beyond just a blue chip prospect, but even still, this is extremely ambitious. BLH will have live coverage. 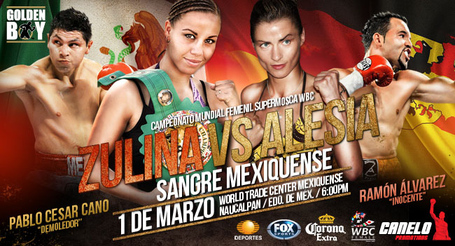