Timothy Bradley says that Manny Pacquiao isn't the same fighter he used to be, while Manny Pacquiao says he didn't train hard enough for their first fight in 2012.

"I had a feeling in training camp that he would run from me once he felt my power and he did...after the third or fourth round.

"To be honest, I wasn't as motivated when I was training for our first fight. I guess I didn't take him seriously enough.

"I was very surprised by the decision. But that's part of the game. He got the decision and my title.

"Bradley was tough and strong. His style was different from mine.

"I am impressed with what Bradley has done since our fight. He is a different fighter now since we fought. He has more experience at this level and as a welterweight champion. He fought extremely well against Márquez. I knew Tim would beat him utilizing his speed. But I am still faster than Bradley.

"The only way Bradley can beat me this time is to knock me out. He cannot outbox me. I will be the aggressor. I will throw a lot of punches at him - more than I threw against Rios -- and I will land them. Last time I was too nice. This time, I will finish what I start.

"I want to get back that belt he won off of me.

"Boxing has always been fun for me. This time the fun is secondary. This is a mission to prove I am the best.

"In my fight against Rios I proved I can still fight at the high level everyone expects from me. I showed I can still control a fight as well as I ever have.

"I'm excited to be back in Las Vegas fighting. Las Vegas attracts great boxing fans and I have great memories of fighting there. 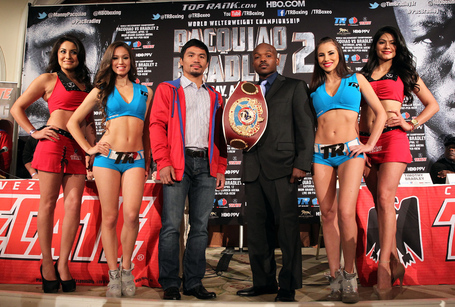 "This is all about redemption. I need Manny. He needs me. I'm going to beat him again. I am younger and a better fighter. Manny fights for the money. I have the hunger to win.

"I scored our fight eight rounds to four in my favor. No way he won that fight.

"Manny is great but he is also mortal. I'm not intimidated by him or his legend.

"Manny didn't look the same against Rios. He didn't have his usual killer instinct. That's the first thing I noticed.

"I don't think he has the hunger anymore and it's never coming back. He no longer has his killer instinct. That's the first thing I noticed in the Rios fight. Every time he backed Rios into a corner, Manny stepped back instead of going for it. He didn't even try to put Rios away. That spoke volumes to me.

"When I fought Márquez I knew my quickness would come into play. I set traps and used my quickness. I fought with intelligence. I used my pure boxing skills.

"I know all about Manny. I went into the ring with him. I felt his best punches.

"Me, I am a different fighter than the one who fought Pacquiao in our first fight. I am more mature, smarter, and I now listen to what my corner is saying."