Garcia vs Herrera preview: 'Homecoming' for Garcia could be 140-pound swan song

Danny Garcia has taken over the junior welterweight division as an underdog much of the way, and on Saturday night, he goes to Puerto Rico to face Mauricio Herrera in what could be his final fight at the weight in the main event of a Showtime tripleheader.

Share All sharing options for: Garcia vs Herrera preview: 'Homecoming' for Garcia could be 140-pound swan song

It would be a lie to say that Danny Garcia's fight on Saturday night against Mauricio Herrera qualifies as a "major" fight in the minds of most observers and fans, few if any of whom see Herrera as any sort of actual threat to the reigning junior welterweight champion, WBC and WBA titleholder, and unbeaten pound-for-pound contender.

For Garcia, though, it's a major fight. He'll be stepping into the ring in Puerto Rico for the first time, and he sees it as a homecoming, as his parents are from the island. Garcia himself is from Philadelphia, and there are plenty of snide quibbles and jokes about Showtime's "Coming Home" promo. Herrera's trainer has openly stated that Garcia is not Puerto Rican; in fact, Willie Silva says, Garcia doesn't even speak the language.

"Danny Garcia's parents claim he is Puerto Rican, but he is not a Puerto Rican, he's from Philadelphia. He doesn't even speak Spanish," Silva said at Wednesday's final press conference in Bayamon.

Danny's father and trainer, the outspoken Angel Garcia, doesn't care what Silva or anyone else has to say, as usual.

"Danny is 100 percent Puerto Rican. I don't care what they say. He is my blood," he said. "I am Puerto Rican. He's Puerto Rican. On March 15, he will still be the undefeated champ of the world. And I will promise you that."

For Garcia (27-0, 16 KO), it's a rare outing where he goes in the prohibitive favorite. As he's made his mark in the boxing world and taken over the 140-pound division, Garcia has dealt with the underdog tag pretty often. Though he was a good prospect, he was never really a blue chipper, and there may have been a time when only Angel and Danny and the rest of the Garcia team really thought he was going to get to this level.

Notably, he was a bit fortunate to escape with a split decision win over Ashley Theophane in 2010. That one fight stood out as a small red flag for Garcia's future -- Theophane is no chump fighter, but a top prospect should have handled him a bit easier than Garcia had, or at least that would be the traditional thinking.

But Garcia did what top fighters do. Surviving a tough fight with his record intact, Garcia learned from the experience and improved. After easily handling veterans Mike Arnaoutis and Nate Campbell, Garcia got a spot on the Hopkins-Dawson pay-per-view undercard in October 2011. If more than 17 or so people had paid to see that event, they would have seen Garcia's coming out party, a split decision win over Kendall Holt that shouldn't have been a split decision at all. Garcia won 117-111 on two cards, with Holt getting an absurd 115-113 score on Wayne Hedgepeth's card.

Five months later, Garcia found himself across the ring from Mexican legend Erik Morales, blown up to 140 pounds, not in good shape, and holding the WBC junior welterweight title, which the sanctioning body had all but giftwrapped for him the prior September. Morales didn't make weight for the fight, coming in at 142 pounds, but Garcia was the better man on the night anyway. Morales had moments here and there, but for the most part was simply outboxed and beaten.

An upset win over Amir Khan followed, as Garcia cracked the Englishman's porcelain chin in round three and finished the job in round four, then a devastating knockout of Morales erased and possible doubts about their first fight, if anyone really had any. Zab Judah was next, and though Judah put up an abnormally courageous fight in being handled by Garcia, he fell convincingly, too.

Lucas Matthysse was The Fight for Garcia, though, and the vast majority expected Danny to fall to the hard-hitting Argentine knockout artist. Matched up as the main undercard bout for last year's Mayweather-Canelo mega-fight, Garcia and Matthysse were both in shape, and were considered the two best junior welterweight fighters in the world.

Leading up to the fight, Angel Garcia was his usual bombastic self. He pointed out that once again, Danny was being doubted, cast into the role of underdog. No matter what the fighter achieved, Angel figured, he wasn't going to get any credit. On fight night, Garcia outclassed Matthysse busting up his eye, dropping him in the 11th round, and leaving with an unanimous decision win on scores of 115-111, 114-112, and 114-112. Though the scores weren't wide, everyone agreed that Garcia's hand was the one to be raised. He was better than Matthysse, and better than everyone else at 140 pounds, too.

Finally, it seemed, Garcia had gotten his due. There was even a good amount of talk about Garcia moving up to 147 pounds and challenging Mayweather. Though that appears it will happen sometime in the not too distant future, for now, Garcia remains at 140 pounds, perhaps for just one more fight.

Mauricio Herrera (20-3, 7 KO) is not exactly what most fight fans would have hoped for as an encore to Garcia's performance against Matthysse. The 33-year-old fringe contender was the first man to beat Ruslan Provodnikov, getting a debatable decision over the Siberian mauler in 2011, but in his last two fights against notable opposition, he's been beaten decisively by Mike Alvarado and Karim Mayfield. Following those back-to-back defeats, he took down Ji-Hoon Kim and Miguel Angel Huerta, "earning" his shot at Garcia.

Herrera isn't the type to come just for a payday, but he concedes this is a good one, with a big chance attached.

"My biggest purse before this fight was $30,000," he said on Wednesday. "I've worked in construction and other handy jobs. This is my opportunity. This is my chance and I'm not about to let it pass me by."

Trainer Silva says they're coming to win, not to show bravery or anything else. "We are here to win this fight. We are not here to see if we can win, we are here because we know we can win."

Garcia is a -1200 favorite in this fight, with Herrera a +700 underdog. An upset win by Herrera would be a true stunner, and the early favorite for Upset of the Year. More likely than not, Garcia will handle his business on Saturday night as more of a tune-up than a serious challenge. And then? Maybe Mayweather. Maybe something else at 147. But he's done what he needed to do at this weight.

In a 10-round heavyweight co-feature on Showtime, American slugger Deontay Wilder (30-0, 30 KO) will look to stay perfect as a professional against crafty and capable veteran Malik Scott (36-1-1, 13 KO). The 28-year-old Wilder and his team have taken a cautious path in their professional journey over the last five years and change, and now they're ready to step up the competition. Scott is a legitimate test for the heavy-handed "Bronze Bomber."

Wilder and Scott know each other pretty well outside of the ring, and have a friendly relationship that will be set aside as both men look to potentially secure a world title shot with a victory.

"I haven't seen Malik Scott personally fight but he's been in my camp before. He was one of my sparring partners in my past camps," Wilder said on Wednesday.

"He was a lot of help and very competitive. He knows my style and what I bring to the table. We know each other's style. Whoever gets first to the punch will win. The smarter and better looking person will win and that's going to be me."

"In my opinion, Deontay Wilder and I are the biggest fight in the heavyweight division right now. I am extremely excited and I am taking on a dangerous fighter with the magnitude of Deontay's punching power and the aura that has been built around him," Scott said at the press conference.

"It will take that type of fighter for me to rise to the great level that I believe I am going to be at come Saturday night. I believe out of everyone that has fought Deontay I have the highest skill caliber. I am not coming to test him; I am coming to beat him."

Scott, 33, is without question the best fighter that Wilder has faced to date. The only thing to wonder is whether or not Wilder's big punch is enough. Thus far as a pro, he's been able to decimate everyone he's faced within four rounds. But while Scott may not be an elite heavyweight, we've seen plenty of hyped heavyweight prospects fail their first major tests. Just recently, Seth Mitchell was flattened in two rounds by Johnathon Banks in 2012, David Price was also smashed in two rounds by Tony Thompson in 2013.

Does a similar fate await Wilder? It's time to find out. 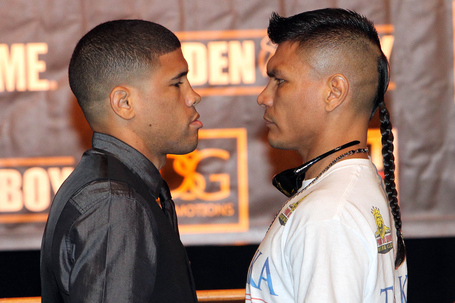 That was a long time ago. The much-discussed "dream fight" between Lopez and Yuriorkis Gamboa never materialized, as Top Rank promoter Bob Arum -- who now promotes neither man -- let it marinate too long. Lopez really lived up to his hype, though, which many forget. For three years, he kept on knocking folks out, until he ran into Orlando Salido in 2011. Salido stopped him in the eighth round of a toe-to-toe war, doing the same thing in 10 rounds the next year. Lopez was stopped in four last time out against Mikey Garcia, looking totally overmatched.

JuanMa was a star, but he burned out fast, in large part due to his indifference to defense and love of the brawl. It's hardly the worst thing -- even now, considered less than a contender, Lopez is a fighter people like to watch. The same can be said of Ponce De Leon, who rebounded from his loss to Lopez and two defeats against Adrien Broner (in a famously debatable outcome that marked Broner's HBO debut) and Yuriorkis Gamboa, to win the WBC featherweight title from Jhonny Gonzalez in 2012, which he would lose in his first defense against Abner Mares.

Ponce De Leon (45-5, 35 KO) and Lopez still have good-looking records, but they're each past their peak. Ponce De Leon is 33 years old, while Lopez is an old 30. The narrative here is that if either of them want to get back into contention, they must win on Saturday. It's a must-win fight, which will air on Showtime Extreme in the States.

But of course that's nonsense. One of them could get knocked out in the first round and find himself in a world title fight as soon as later this year. That's the way boxing works. No loss eliminates someone from a possible world title fight, not as long as there are four belts per weight class that are called "world titles," and so many promoters around this great, big world of ours prepared to seek out name value opponents who present lower risk. Ponce De Leon could see himself fighting for a lightweight world title at age 38 if somebody sees fit to sign him up for that, no matter what happens Saturday. And we'll just point out that it's a bad joke of a fight, and forget all about this supposed must-win fight with Lopez, barely remembering that it even happened at all.

The reason to watch this fight is simple: it should be good action. Almost certainly, both of them will fight on, and for a good while. This is only must-win as far as potentially getting a title shot in their next fight.