Share All sharing options for: Kovalev vs Agnew weigh-in: Cedric Agnew overweight, Mayfield and Dulorme brawl on the stage

In a strange weigh-in event from Caesars Atlantic City, Sergey Kovalev made the 175-pound limit with no trouble, while challenger and first-time HBO fighter Cedric Agnew was a bit overweight. With a main event not quite settled, the co-feature fighters Karim Mayfield and Thomas Dulorme got into a brawl on the stage after hitting the scales.

Just one of those days. 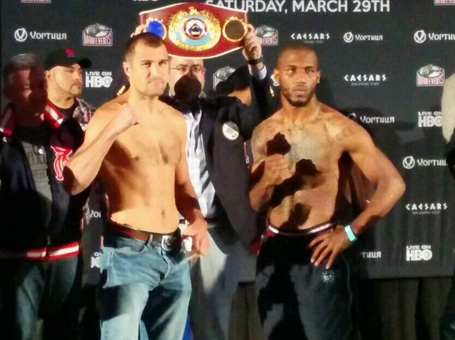 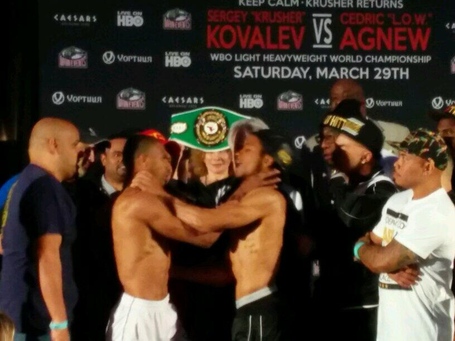 After the main eventers had weighed in, the HBO co-feature fighters hit the stage. Both made weight and looked good, with Mayfield (18-0-1, 11 KO) weighed in at 139.6 and Dulorme (20-1, 14 KO) at 139.8, but they followed that with some close quarters trash talking and ... licking. Yes. Licking. Which led to choking. And all of that led not to anything kinky, as the description might make one expect, but to a flash of real violence that was a bit more nasty than the usual pull-apart between camps. This followed on the heels of a confrontation the two had that was captured by HBO earlier this week.

Luckily, Aaron Davis, the gigantic (6'7", 280, according to reporter Keith Idec) New Jersey commissioner, took control of the situation and cleared the stage, towering over all who dared disrespect his sport in his state.