It's been a long time since Manny Pacquiao's Nevada gate receipts have dipped below $8 million, but they did just that this past Saturday in his rematch with Timothy Bradley.

Share All sharing options for: Pacquiao vs Bradley II live gate comes in at $7.8 million, Manny's lowest in years

Last Saturday night's rematch at the MGM Grand Garden Arena in Las Vegas between Manny Pacquiao and Timothy Bradley did a live gate total of $7,865,100, with a paid attendance of 14,099, according to the Nevada State Athletic Commission.

This rematch seemed to generate more interest than the first fight, but that may have been just within the vacuum of diehard boxing fans, who saw this as a good matchup between guys with a score to settle, both of whom are high level fighters. But that doesn't say anything about the general perception of the more casual fan out there. Do they see Manny Pacquiao fights as events like we do? Probably to some degree, but maybe not the same as before, at least for now.

There's also the possibility that many of those fight fans, a percentage of whom may not have seen or cared about Tim Bradley beating Provodnikov and Marquez in 2013, didn't believe this fight even needed to happen at all, what with Pacquiao having so convincingly won in 2012, in the eyes of most.

We'll see what the pay-per-view numbers look like to be able to judge more on this, but they did put over 14,000 into the MGM Grand, which is not a sellout, but neither was the first fight. And a gate of just under $8 million is probably about what was expected, though it is Manny's lowest gate total in Nevada in years: 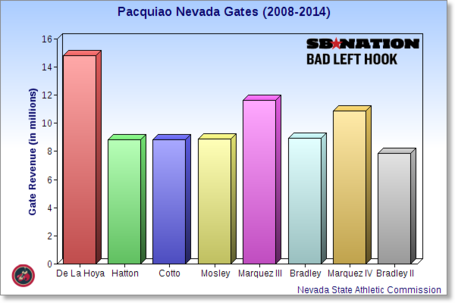 I want to make clear that I'm not saying this was a bad fight or that Pacquiao isn't popular anymore. The fight itself was great on paper and great in execution, I don't think anyone felt let down by the performances of either fighter, and Manny is obviously still one of the biggest names in the sport. But this is his lowest Nevada gate total in many years, his lowest since he became the A-side superstar fighter that he still is. Does that mean anything for now? I don't know. It's just a fact that it's a low gate for Manny Pacquiao. It's also a dream gate for a lot of top fighters.