Share All sharing options for: Bernard Hopkins: The Perennial Craftsman

Bernard Hopkins, world champion prizefighter, is 49 years old. I know this gets talked about a lot, but take a moment to really let the whole idea sink in. In a sport that doesn't just threaten head trauma, but facilitates it--a sport more notorious than any other for chewing up young athletes and spitting out prematurely old men--Bernard Hopkins is still one of the best in the world. At the age of 49.

The obvious question is, how does he do it? Well, Hopkins himself will be the first to tell you the answer to that question: technique, technique, technique. In a boxing era that tends to value athleticism and talent over carefully sharpened skill, Hopkins is a bold reminder of just why we fondly refer to this sport as "the sweet science." Everything Hopkins does is scientific, from the way he stands, to the way he moves, to the way he clowns and fouls his opponents. Nothing is done carelessly, and everything is done for a reason.

This weekend Hopkins fights yet another young gun out to make his name with a win over the seasoned vet. Beibut Shumenov might hold a couple of titles, but Hopkins will be far and away his biggest test yet. To understand the craft in what Hopkins does, let's start where B-hop would want us to: with his stance.

Stance is just one of the many facets of boxing that mark Hopkins as a proponent of the old school. Let's examine the features of Hopkins' stance in comparison to that of one of his biggest opponents, Oscar de la Hoya, whom I would describe as having a very typical "modern" stance. 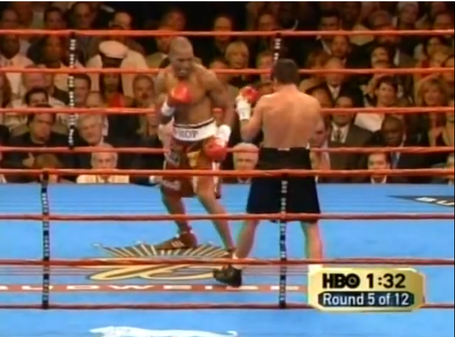 Hopkins stands with his head off-center, closer to his right foot than his left. This creates a straight line from his left foot all the way up to his left shoulder around which de la Hoya must get before he can hit Hopkins' head. Even with his hand down by his hip, Hopkins' left shoulder acts as a defensive wall, and by bending a little farther to his right at the hip, he can bring that shoulder up to protect everything but the very top of his head (which his opponents know is practically made of steel). He also stands with his weight balanced, but his head just slightly forward, creating a false sense of distance--all he has to do is rock back onto his right foot and his chin will move a full foot back from Oscar, making him much more likely to miss and/or overextend, at which point he is ripe for the counter shot.

De la Hoya's stance, by comparison, is rudimentary. Not much about the way he stands is by design, other than the fact that his hands are up and ready to block or punch. His head is mostly centered between his feet, and he carries his weight mostly forward. The most notable difference in this fight is posture. Oscar's shoulders are slightly hunched and rolled forward. This causes his chest to orient down, making his chin an open target even when tucked. Hopkins' chest, on the other hand, is projected upward and his shoulders pulled back. Even when they land punches tend to ping off the sides of Hopkins' head.

Even the way he stands is designed to give the opponent trouble and create opportunities for himself. It's very old school, almost exactly like the stance of Jim Jeffries here, on the left, posed opposite Jack Johnson.

FENCING WITH THE JAB

While you're looking at that image, let's talk about hand position. Watching a Hopkins' fight, you'll tend to see his guard shift as the rounds wear on. His hands start high, right around shoulder-level, and slowly drift downward over the course of the fight. This isn't a product of fatigue; it's about comfort.

During Hopkins' second fight with Jean Pascal, Max Kellerman commented, "Hopkins [is] fighting with his lead glove almost like they used to hold it a hundred years ago." Look again at the lead hands of Jeffries and Johnson above, and then compare Hopkins' extended lead here.

In this GIF, Hopkins and Pascal are testing the distance with their left hands. Pascal, ever the modern "athlete" fighter, uses his own judgment and, after a few feints, steps into a jab to the body. Hopkins, on the other hand, knows not to trust his eyes implicitly--after all, he himself has a style that cleverly manipulates the opponents sense of distance, as we observed above--so he uses his lead hand to test the range. Like a fencer, Hopkins slides forward behind his jab, keeping his weight balanced between his feet so that he can pull back or change angles at a moment's notice. That left hand tells him where his opponent is until he feels he has learned their distance, at which point he will switch to the lowered guard and throw more damaging jabs from underneath.

Note also the difference in body language in this GIF. Neither fighter lands, but Hopkins barely has to move at all when Pascal goes for his jab, whereas Pascal himself has to skip away and cover with his right hand as Hopkins shoots out his left. A raised left hand is a tangible threat. In the early stages of the fight, or whenever he feels threatened, Hopkins holds his left hand like he's keeping a knife on the opponent. That extended lead is a silent promise: "Come forward, and this will hit you in the face."

Hopkins' right hand is very interesting, because he rarely throws it as a power punch. Even when he really throws his weight into it and garners lots of "ooh"s and "aah"s from the crowd by snapping back the head of the opponent, his intention is rarely to knock the other man out. Rather, Hopkins uses his cross as a bridge--a means of closing distance and getting to his real wheelhouse: the inside.

Many fighters fall into the opponent when they throw their right hands, but most do it because they can't control their bodyweight. For Hopkins, this falling right is a controlled maneuver, designed to get him safely into the phone booth, where virtually no one else in the sport can compete with him.

Notice that Hopkins' head does not just come forward with his right hand, but also moves off-line to the left. De la Hoya doesn't really try to counter punch until Hopkins has already gained the clinch, but note how his outflung right hand slips off the top of Hopkins' head (as will his opponent's face if they happen to stand in the way). Even during this dynamic movement B-hop keeps his posture--his back stays almost entirely straight until he's made contact with his opponent's body. With the combined effects of lateral head movement and stable posture, Hopkins is very hard to counter even with uppercuts as he collapses the pocket.

Throwing oneself out of stance is also a bad idea under most circumstances, but Hopkins does so as part of this calculated entry. As he launches forward, throwing his weight onto his left foot, he steps forward and to the right with his rear foot, quickly closing the distance with his feet as well as his upper body.

Boxing isn't a forgiving sport, but it is especially unforgiving to those who expect the sport to take care of them. Bernard Hopkins' wisdom lies in the fact that he is always looking to take care of himself first and foremost. Whether it's through diet and lifestyle outside of the ring (Hopkins claims his only vice is a single celebratory piece of cheesecake after every win), or his clever tactics inside, Hopkins is always looking to game the system, and as far as I'm concerned there's no shame in that.

It goes to show, if you want to be a world champion at the age of 49 you've got to live clean, and fight dirty.

Note from the author: Thanks for reading this, my first ever piece for Bad Left Hook! I'm excited to spend a lot more time covering the sweet science as a permanent part of the team.

For more analysis, as well as fighter and trainer interviews, check out Heavy Hands, the only podcast dedicated to the finer points of face punching. On this week's episode, Connor answers listener questions with boxing trainer Luis Monda.