Manny Pacquiao hangs with all the coolest celebs.

Manny Pacquiao recently got a visit at the Wild Card Boxing Club from the legendary Bob Dylan, and this week he was able to get a photo snapped with former U.S. President Bill Clinton before the taping of "Jimmy Kimmel Live" on Wednesday.

Here's the photo of Manny & Bill, just hangin' out: 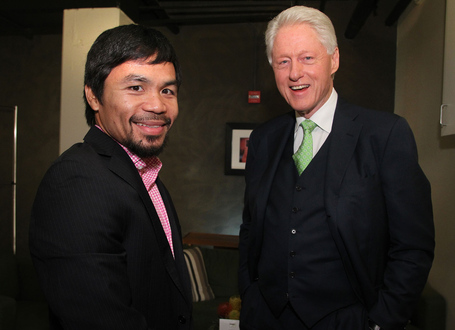 Pacquiao (55-5-2, 38 KO) is in the final stages of training and promoting for his April 12 rematch on HBO pay-per-view against Timothy Bradley (31-0, 12 KO), who will be defending the WBO welterweight title he controversially and shockingly lifted from Manny in June 2012. Manny appeared last night on ABC's "Jimmy Kimmel Live," where he is a frequent guest ahead of his fights, and often sings and does regular Manny stuff, being cool and palling around with Jimmy and Prez Clinton, no big, just Manny doing Manny, living life, chasing his dreams, singing his songs.