Juan Manuel Marquez faces Mike Alvarado in the headline bout of the weekend, with Nathan Cleverly returning in Wales, and more.

FOX Sports 1, 10:00 pm EDT, Antonio Orozco vs Martin Honorio, Manuel Avila vs David De La Mora. Orozco and Honorio were scheduled to meet recently, but that was postponed when Honorio had problems with his visa. Now it's a headline bout on FS1, and given the standards of the series, pretty good.

ESPN2, 9:00 pm EDT, Delvin Rodriguez vs Joachim Alcine, Joe Hanks vs Derric Rossy. This is the first fight at Olympic Stadium in Montreal since 1980, when Sugar Ray Leonard faced Roberto Duran. Back then, Olympic Stadium was relevant, so it got a big fight. Now it's a big half-abandoned building, so it gets Rodriguez-Alcine, which is OK and all, but I mean, come on. BLH will have live coverage.

SHO, 10:00 pm EDT, Joel Diaz Jr vs Tyler Asselstine, Frank Galarza vs Sebastien Bouchard. This is a ShoBox card featuring ShoBox fights. Diaz was in a cracker a couple years ago on ShoBox. BLH will have live coverage.

Sky Sports (UK), 3:00 pm EDT, Nathan Cleverly vs Sean Corbin, Gary Buckland vs Gavin Rees, Lee Selby vs Romulo Koasicha, Callum Smith vs Tobias Webb. Cleverly moves up to cruiserweight for this fight, facing a 39-year-old club fighter from Guyana. Rees is planning to retire after this fight. BLH will have live coverage. 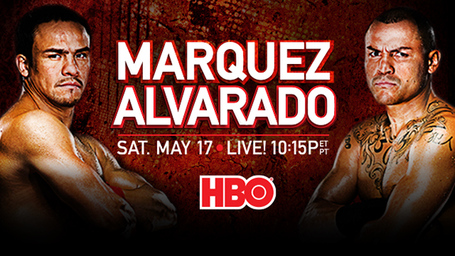 HBO / TV Azteca (MEX) / Main Event PPV (AUS), 10:15 pm EDT, Juan Manuel Marquez vs Mike Alvarado. The winner of this fight is likely to face Manny Pacquiao later this year, making this a high-stakes matchup for both guys. The fight has a 143-pound catchweight limit, with Alvarado coming up from 140 and Marquez playing his A-side hand and getting himself a catchweight when this could easily have been fought at 147, which a fight with Pacquiao would be. BLH will have live coverage.

UniMas, 11:30 pm EDT, Andy Ruiz Jr vs Manuel Quezada, Anton Novikov vs Javier Castro, Jose Benavidez vs Angel Hernandez. Ruiz vowed to not fight again until he stopped being so fat. I don't know what his condition is at this point.