Carl Froch faces George Groves in a rematch at Wembley Stadium, Felix Sturm and Sam Soliman meet in their own rematch in Germany, and Nonito Donaire debuts in Macau against Simpiwe Vetyeka as he looks to win another world title.

Share All sharing options for: Froch vs Groves II, Donaire vs Vetyeka, Sturm vs Soliman II, more: Fight times, live streams and boxing schedule for May 31, 2014

Top Rank TV / BoxNation (UK), 5:00 am (?) EDT, (Not Airing Live) Nonito Donaire vs Simpiwe Vetyeka, Chris Avalos vs Yasutaka Ishimoto, LIVE: Nicholas Walters vs Vic Darchinyan, Evgeny Gradovich vs Alexander Miskirtchian. There will be other undercard bouts airing on the Top Rank TV stream, including Rex Tso and Esquiva Falcao in action. This is all sort of complicated on Saturday, so here's a quick rundown:

Of course, BoxNation will also have the card starting live at 9:00 am EDT. 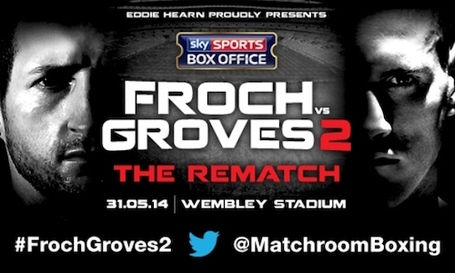 Sky Box Office (UK), 1:00 pm EDT, Carl Froch vs George Groves II, James DeGale vs Brandon Gonzales, Kevin Mitchell vs Ghislain Maduma, Jamie McDonnell vs Tabtimdaeng Na Rachawat, Anthony Joshua vs Matt Legg. The undercard from Wembley starts early in the US afternoon on UK PPV, and we'll have live coverage of the full show, because this is a pretty good card. DeGale-Gonzales is of particular international interest, since the winner will be in line to face the Froch-Groves winner.

SAT1 (DEU) / Main Event PPV (AUS), 3:00 pm EDT, Felix Sturm vs Sam Soliman II. Lost in the middle of the two bigger cards on Saturday is this world title rematch in Germany, pitting IBF middleweight titlist Felix Sturm against Sam Soliman. It should be a good action fight if nothing else, given Sturm has become one of the most exciting fighters in the world in recent years. We'll have some level of live coverage.

HBO, 4:00 pm EDT, LIVE: Carl Froch vs George Groves II, Tape Delay: Nonito Donaire vs Simpiwe Vetyeka. Obviously, we'll be watching Froch-Groves here, and you should, too! Unless you're in the UK. Then order it on Sky Box Office. This is the most confusing damned boxing schedule day I've ever had to put together. BLH will have live coverage.

HBO2 / HBO Latino, Midnight EDT, Javier Fortuna vs Juan Antonio Rodriguez, Luis Orlando Del Valle vs Luis Rosa. This show will also include a replay of Froch-Groves. This day is a headache, I swear to Garth. BLH will have live coverage.