Froch vs Groves: George Groves and the Other Angle

Share All sharing options for: Froch vs Groves: George Groves and the Other Angle

Typically we think of angles from a horizontal perspective. Moving right to left, boxers will try to off-balance their opponents, striking them as they turn and then moving again before the counter can be thrown. I've written about angles in this respect plenty of times before. However, boxers are not restricted to a single plane of movement, and I would be remiss to overlook the advantages of employing vertical angles.

When George Groves began pummelling Carl Froch in their barroom brawl of a bout last November, it was the result of two things: 1) Carl Froch's arrogance, and 2) George Groves low angle. From the beginning of the fight, Groves made it clear that he wanted to get underneath the lanky Nottinghamian, to prod and poke Froch with straight punches from beneath his center of gravity.

Like so. In this GIF, you can see Groves jabbing Froch from a lowered position. Note how the upward trajectory of Groves' jab pushes Froch back onto his heels, setting him up for the right hand that follows. The range is off on that right hand, but the opening is most certainly there. Here's what it looked like when Groves found the mark.

Before I get ahead of myself, let's talk about the reasons for utilizing the low angle. 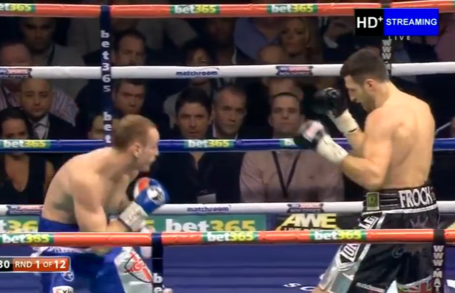 Most importantly, a lowered stance facilitates two essential facets of the sweet science: balance, and leverage.

With the knees bent and center of gravity lowered, Groves is more difficult to knock off balance, and thus more difficult to hurt. That retention of balance also means that, after dodging or blocking an attack from Froch, Groves is naturally in a better position to counter. Getting and staying low in the pocket also allows Groves to slip punches while staying close enough to Froch to hit him when he senses the opening.

When you lean back or stand up tall to evade a punch, the opportunities for counters are substantially less. Leaning back increases the distance between your fists and the target, so while the opponent's punches may very well miss, you will be far less capable of punishing him for it. And God help you if those punches do get through--with a higher center of gravity and less bend in the knees to absorb shock, the chances of being stunned and knocked down are much higher.

You can see a distinct difference between the position of Froch and that of Groves in this GIF. Even from the outside, Groves is nice and low, while Froch is standing relatively tall. In response to Groves' up-jab, Froch backs up, standing even taller and leaning back in an attempt to evade the incoming blows. He is instantly out of position to counter, and a mere glancing shot to the jaw visibly stuns him when he would have eaten it easily with his feet set and his knees bent.

Groves went to the well with this 1-2 throughout his fight with Froch, and it was consistently successful. Groves' 1-2 was a little different from the average two piece combo of today. In fact, Groves had an old school way of maximizing the effects of his punches from his low angle, by threatening upward with the left hand and downward with the right. Note the trajectory of Joe Louis' punches in the GIF below.

Louis jabs up, and crosses down. His opponent never sees the second shot coming. Now let's compare that to Groves' punches once more.

Just like Louis, the left hand threatens upward, and the right hand comes crashing down. Coming in low and throwing his jab up into Froch's face, Groves hides his right hand from Froch's view. There are few things more likely to get a boxer hurt in the ring than taking his eyes off the threat and looking down at the floor, and that's precisely what Groves' up-jab does. Once Froch's eyes are occupied with the left hand, Groves throws a tight overhand right and catches Froch on his exposed temple, unprepared for the impact.

As I mentioned above, the other major advantage of a low angle is leverage. Aside from improved balance, bending the knees helps root the feet to the ground for powerful punching. With the center of gravity lowered, power is effortlessly generated by the simple shifting of weight, with the added advantage that those strikes connect at an upward angle themselves, often forcing the opponent into more of a vulnerable, upright posture. When Groves threw combinations from his lowered stance, his success was pretty remarkable.

Any time that Froch and Groves exchanged combinations early in the fight, Groves' lowered position automatically lent him an advantage. In the GIF above, Froch not only has difficulty generating power in the pocket with Groves, but his punches tend to glance and slide off of Groves head, while Groves' own shots rattle Froch's head time after time.

Though the stoppage was far from justified, there certainly were some moments of success for Carl Froch. They happened when--you guessed it--Groves abandoned his low angle and stood tall in front of his opponent.

The fruit of inexperience, Groves stands up tall in the middle of a heated exchange with Froch. This wasn't his first time doing so in the fight: in the earlier examples you can see Groves' legs straightening out the further he gets into his combinations, so that by the end of a string of punches he ends up practically leaping into the air to continue generating force. But that was going forward against a fighter in Froch who has never been known to counter punch very well. In the 9th round above, Groves suffers the consequences of that bad habit when he lets Froch back him into the ropes.

As Groves springs into his punches, his legs straighten out. Though he still appears to be lower than Froch throughout much of this exchange, that elevation is a result of his curled back, not any bend in his knees. The low angle becomes positively critical in heated exchanges like this-- with no more room to move back, it is more important than ever that Groves come under Froch's punches in order to avoid them. When he doesn't, it's no surprise that he gets hurt.

The first fight wasn't the best performance for either of these fighters. Groves, for all his impressive moments, was clearly anxious and tightly wound coming into the biggest fight of his career. His inability to maintain his composure later in the fight was the evidence of that. Froch, for his part, clearly didn't take Groves seriously as an opponent, and could very well have been on the way to his most humiliating defeat. For fight fans, however, the notion that neither fighter was at their best is a positive one: these two men are set to rematch this weekend, and there is the very likely possibility that both will arrive in top form.

Groves might be unpolished, but if he can find the same angles in the rematch that nearly won him the first bout, he might just be on the verge of his breakout performance. As for Carl Froch, let's hope for his sake that he watched the tape.

For more analysis and interviews with fighters and trainers, check out Heavy Hands, the only podcast dedicated to the finer points of face punching. Be sure to listen to my latest episode, in which I talk shop with Duane "Bang" Ludwig, head coach of Team Alpha Male and trainer of UFC bantamweight champion TJ Dillashaw.