Take a look at the official scorecards for tonight's Floyd Mayweather vs Marcos Maidana fight.

Floyd Mayweather had anything but an easy time tonight, winning his second straight majority decision, but this time, it wasn't one where the 114-114 card came from the eyes of a potential raving lunatic judge. Mayweather won on scores of 114-114, 117-111, and 116-112 tonight over Marcos Maidana.

Here are the official scores, via Jorge Eduardo Sanchez of ESPN: 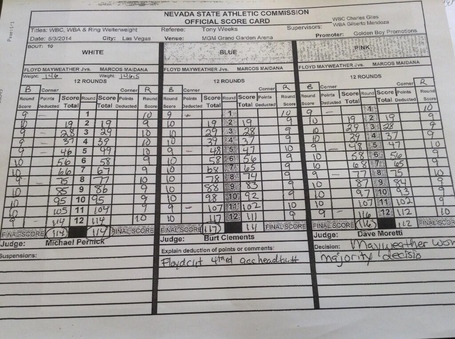 Mayweather (46-0, 26 KO) had to adjust after a slow start in the first half of the fight, but he led 3-2 after five rounds on both of the cards he wound up winning, trailing 4-1 on the draw card. I also had Mayweather down 4-1 after five rounds, but thought he fairly well dominated Maidana (35-4, 31 KO) over the second half of the fight, which earned him the deserved win. We had Mayweather winning 115-113, with our card most resembling the draw from Florida judge Michael Pernick.

How did you score the fight tonight?