Floyd Mayweather got the win last night on Showtime PPV, but Marcos Maidana did set a new high mark for punches landed on the defensive master.

Share All sharing options for: CompuBox says Maidana landed more punches against Mayweather than anyone ever has 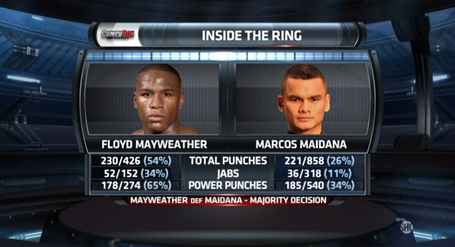 It's also worth noting that Maidana landed at a much higher percentage than most Mayweather opponents do, but also, obviously, worth noting that on his power punches, Mayweather (46-0, 26 KO) basically couldn't miss, and he landed a gaudy 65% of his power shots against Maidana (35-4, 31 KO) on his way to the majority decision win.

Also, those photos are old as hell.

This may also say something about Mayweather's lack of power these days at 147 pounds -- which was never great to begin with -- as usually if you have a guy landing half of his power shots, you see a knockout or a stoppage at some point. Mayweather may have lightly shaken Maidana a couple of times in the fight, but he was never in a position to really go at him and look for a stoppage. Maidana, though, also never really hurt Floyd, even as much as he did land, and considering his reputation as a puncher, that may also say something about his power at this level.

Or maybe they just both take really good punches and are both good fighters. That's possible. I know it sounds crazy to say that both guys in one fight are good, but it does happen.