Yes, Sergio Martinez was not in tip-top shape, but neither was Miguel Cotto his usual self. Bad Left Hook's Connor Ruebusch breaks down the newfound footwork that gave Cotto the upper hand in last Saturday's middleweight title clash.

An injured knee can make a man unsteady on his feet, but so can Miguel Cotto's left hook. This is a point that seems to have been lost somewhat in the furor surrounding last Saturday's pay-per-view fight, an upset win for Cotto over middleweight champion Sergio Martinez.

Cotto mollywhopped the aging champion, and there's no two ways around that. In fact, the dominant nature of Cotto's win seems to be losing him credit for what was, in reality, an incredible performance from by Puerto Rican puncher. When Cotto dropped Martinez three times in the first round, the calls of the HBO team had very little to do with his set-ups, or the power of his punches, and everything to do with Martinez's supposedly ruined knee. The vast majority of boxing fans followed suit, pointing to every one of the Argentine's wobbles as further evidence that his legs were permanently damaged.

No, Martinez never looked quite like his old self, even in the minute prior to the first knockdown and the middle rounds when he began to successfully adjust to his opponent. But Martinez also never had a chance to warm up, given that Cotto caught him cold with a series of devastating punches. And Martinez was also in against an excellently prepared opponent: Cotto's strategy was near flawless in execution, and was perfectly designed to outmaneuver a tricky southpaw like Martinez.

So, as we dive into an analysis of Cotto's strategy, keep in mind that I'm not attempting to assert that Sergio Martinez was at his best for this fight. I am merely trying to remind everyone that there were two fighters in the ring on Saturday, June 7th, and one of them was perfectly equipped to dismantle the other.

Hooking Off the Jab

The punch that won Cotto this fight was one that has always been his weapon of choice: the left hook. A natural left-hander, Cotto packs serious power in his lead hand, and his hook is responsible for most of his knockouts. Without his jab, however, he wouldn't have been able to catch Martinez with his hook so easily.

From the start of round one, Cotto showed that his intentions were to pressure Martinez with his jab. Conventional wisdom would have it that the jab is all but useless against a southpaw, and that the straight right is the preferred weapon. Orthodox boxers, they say, should strive to get their left foot outside the right foot of a southpaw opponent, closing the distance and lining up the opponent for their right hand.

But what if the southpaw doesn't let them position themselves that way? This is one of boxing's most enduring conundrums, a seemingly inescapable strategic enigma that coaches perpetuate for their unwitting wards year after year, decade after decade. One of the key reasons that southpaws tend to outbox their opponents with apparent ease (think Austin Trout, Erislandy Lara, Guillermo RIgondeaux) is that southpaws are taught to utilize every angle at their disposal no matter the opponent, while orthodox fighters are continually instructed to do only one thing: get your foot outside, throw the right hand. It doesn't take much critical thinking to see how this renders the vast majority of orthodox fighters suicidally predictable when it comes to fighting lefties. It also means that most orthodox fighters simply allow their southpaw opponents to control the inside angle, giving them a clear line of attack for their power punches. 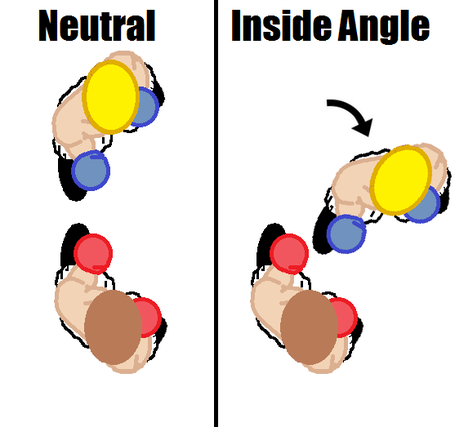 As I pointed out in my pre-fight analysis, this is the angle that Martinez habitually chases, because most of his opponents are all too ready to give it to him, whether they realize it or not. He happily circles toward his opponent's right hand because, as long as he keeps turning his opponent, it's always far enough away that he can dodge it before it lands. Southpaws are accustomed to strikes coming from long distances, and Martinez is no exception.

That brings us back to the jab, and how Cotto made it work.

Early in round one (fight clock reads 2:20), Cotto takes a step straight forward and throws his jab. Martinez swats it down with his right hand and counters with a jab of his own before repositionng himself, but that's fine: landing the jab isn't Cotto's goal, and it needn't land to be effective. Immediately after Cotto steps forward again, but this time his left arm bends mid-flight, turning into a last-second hook. Note the deep step Cotto takes to the inside of Martinez's right foot, placing his left hand very close to Martinez's chin. Granted, his hook merely swipes the face of the Argentine, but Cotto is ready to adjust.

In this new series, BE's striking analyst Connor Ruebusch delves into history and more to explore some of boxing's most recognizable fighting systems. Part 2 of the first installment breaks down the techniques of Archie Moore's cross-armed guard.

In this new series, BE's striking analyst Connor Ruebusch delves into history and more to explore some of boxing's most recognizable fighting systems. Archie Moore's famous cross-armed guard is featured in this first installment.

A few seconds later (fight clock reads 2:05), Cotto tries again. The jab this time is thrown to the body, and it lands cleanly on Martinez's ribs. Again, Martinez circles to Cotto's right to re-set, vying for that inside angle he's so fond of. And just like last time, he tries to counter Cotto's next jab with his own, except it's not a jab at all; it's another left hook, and this one comes crashing down on Martinez's jaw, sending him staggering some fifteen feet into the ropes at the far side of the ring.

You see, Martinez is used to a certain distance against orthodox fighters. They step to his right, and he makes a small turn and puts them right back where they started. By placing his foot to the inside of Martinez's, Cotto placed himself closer to the champion's chin than he realized, and caught him repeatedly as he tried in vain to counter.

Let's see two more examples of this same hook later in the round.

At 1:19 of the round, Cotto steps in, eschewing the jab this time and opting to lead with the hook. This is fine, as the jab has already done its work, establishing a clear route to Martinez's center line, something the champion is clearly unprepared to deal with. Again Martinez tries to counter, looking very hesitant on the trigger. While some of this is likely a result of the knockdown earlier in the round, we cannot overlook the effect that Cotto's footwork had on Martinez's usually impeccable timing. With Cotto inside his stance, his habitual left pivot, which normally creates plenty of space and a strong angle from which to punch, now leaves him well within the path of the Puerto Rican's hook. At 1:05, Cotto actually cuts so dramatically to Martinez's left that he nearly turns his back, but by closing the distance he is able to smother Martinez's counters while landing his own punches.

This is why I contend that the hook is the power punch to use against southpaws. For the reasons stated above, southpaw boxers are accustomed to fighting at very long distances, usually dominating just on the edge of jab range. From there, the right hand of an orthodox fighter has quite a gap to cover, making it relatively easy to avoid. The hook, on the other hand, is automatically closer to the target from the start. In addition, many southpaws struggle to see it coming over their own lead shoulder, making it a potent knockout blow.

To his credit, Martinez did begin to adjust. By the later rounds, after being rocked throughout the fight, he started slowly to catch on to Cotto's hook, moving away from it preemptively and covering up or ducking under it when he sensed it coming. However, Cotto can adapt as well, and he began mixing up his left hand punches to catch the champion off-guard.

Here, in the final round of the fight, Martinez steps outside Cotto's left foot and leads with a left hand. Cotto deftly slips the punch and immediately counters. Martinez senses the right hook coming and lowers his head, shelling up behind his gloves, but Cotto picks his punches perfectly. A short right hand convinces Martinez to peek out from behind his guard, and Cotto snaps his head back with a left uppercut. Again, Cotto is well positioned to the inside of Martinez's right foot, body more or less facing his opponent dead-on. From this position, Martinez simply cannot circle away from Cotto's left hand fast enough.

It's possible that Martinez, always more natural athlete than technical boxer, came into the fight unaware that an orthodox fighter could use his favorite tricks against him. That's precisely what Cotto did. Above, Martinez tries to create the angle for his left hand by stepping outside Cotto's left foot, but all it takes is a small shift on Cotto's part to turn this into a dominant angle for himself. 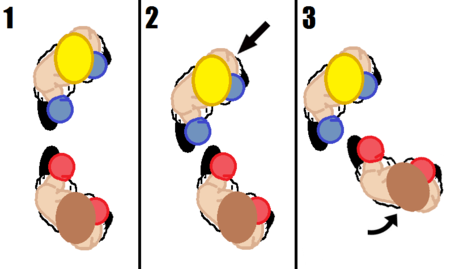 Countering a southpaw's outside step with a pivot to the inside angle.

So what about the traditional strategy, then? The outside angle may be overrated, but is it useless?

Absolutely not. In fact, it is by exploiting the inside angle that orthodox fighters can force crafty southpaws into giving up that angle they're normally so good at avoiding. Once Cotto had established that he was thoroughly capable of thrashing Martinez from the inside angle, Martinez became preoccupied with preventing it, fighting constantly to get his foot to the inside of Cotto's and turning his body to protect his centerline. In doing so, however, he handed Cotto the sought-after outside angle, and Cotto was all to willing to take it.

Here, Cotto jabs, stepping past Martinez's right foot this time and angling his body for a right hand. Martinez, oversensitive to Cotto's repeated attempts at the inside angle, turns his right foot in and jabs, trying to reestablish that position for himself. Unfortunately, he ends up overcompensating and Cotto is easily able to roll under his jab and step off-line with a short right hand. With his body turned away to his left, Martinez has no way to stop Cotto stepping to his right.

Cotto exerted tremendous metnal pressure on Martinez throughout this fight, pushing the Argentine early, catching him with heavy punches from the get-go, and then punishing him for every successful adjustment. If nothing else, this fight should emphasize the impact of Freddie Roach on Miguel Cotto's fighting, as the well-traveled (and periodically lost) boxer was never without an answer against one of the craftiest men in the sport, injury or no. Simply put, this was a clinic, and Miguel Cotto is a very thorough teacher.