Ruslan Provodnikov and Chris Algieri are set and ready for tomorrow night's HBO Boxing After Dark main event for Provodnikov's WBO junior welterweight title, and so, too, are Demetrius Andrade and Brian Rose, who meet in the TV co-feature for Andrade's WBO junior middleweight belt, as all fighters made weighed and looked on good shape this afternoon at the Barclays Center.

Provodnikov (23-2, 16 KO) weighed in at 139.8 pounds, doing his usual terrifying flexing, and emitting a pair of guttural screams after the face off with Algieri (19-0, 8 KO). Algieri, the heavy underdog, weighed in at the limit of 140 pounds. The two fighters shook hands, smiled, and were generally good-natured in their posing for photos. 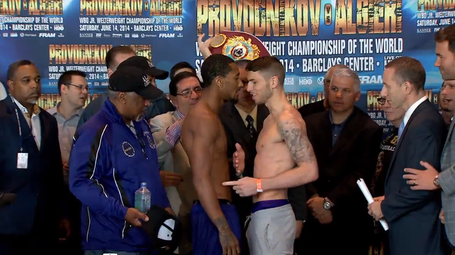 The same can't be said of Andrade (20-0, 13 KO) and Rose (25-1-1, 7 KO), who got into some gamesmanship after tipping the scales at 153.8 and 153.4 pounds, respectively. Andrade tried to maneuver his way in front of Rose, who shoved his arm aside with a smile and stepped forward himself, which came back from Andrade. In the staredown, they went nose-to-nose, both jawing and bumping, but there was no serious animosity. True trash talk, a couple of guys looking to show they're ready and loose.

BLH will have live coverage tomorrow night, with the live doubleheader preceded at 10:00 pm EDT on HBO by a replay of last week's Cotto-Martinez pay-per-view fight.