Robert Guerrero returns on Showtime, with Devon Alexander also in action and an intriguing matchup between Vasyl Lomachenko and Gary Russell Jr also on the bill, plus Martin Murray and more are in action around the world.

FOX Sports 1, 8:00 pm EDT, McWilliams Arroyo vs Froilan Saludar, Cesar Seda vs Alex Rangel. Arroyo is a solid prospect still, and Seda is a good fighter. Don't know how good these fights will be, but if the usual FS1 standard is any indication, probably not very. 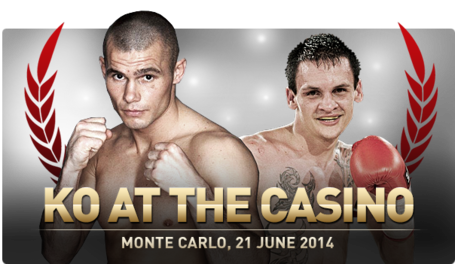 BoxNation (UK), 2:00 pm EDT, Martin Murray vs Max Bursak, Thomas Oosthuizen vs Doudou Ngumbu, Mateusz Masternak vs Youri Kayembre Kalenga, Hekkie Budler vs Pigmy Kokietgym. A nice card from Golden Gloves of South Africa, as they return to Monte Carlo for another card. They've got Murray under contract now that he's done with Hatton Promotions, and the main event is a solid matchup, as are the rest of these fights. BLH will have live coverage.

NBC Sports, 8:00 pm EDT, Anatoliy Dudchenko vs Nadjib Mohammedi, Karl Dargan vs Anthony Flores, Sullivan Barrera vs Lee Campbell. Dudchenko vs Mohammedi is an eliminator for the IBF light heavyweight title, currently held by Bernard Hopkins, and if Hopkins' goal is to really unify all four belts, mandatories aren't something he can ignore, though he could probably get a one-fight optional extension. But anyway, this is on the same time as the SHO Extreme fights, but will end when the SHO broadcast starts.

SHO Extreme, 8:00 pm EDT, Chad Dawson vs George Blades, Dominic Breazeale vs Devin Vargas. This is Dawson's first fight in a year, since he was smashed in one by Adonis Stevenson, and it's a gimme. In fact, if it looks like anything but an easy blowout for Dawson, then there's something wrong with him, because Blades is a small, old light heavyweight. Breazeale has been impressive as a pro so far, but heavyweight prospects are always bustable. BLH will have live coverage.

SHO, 10:00 pm EDT, Robert Guerrero vs Yoshihiro Kamegai, Devon Alexander vs Jesus Soto Karass, Vasyl Lomachenko vs Gary Russell Jr. Guerrero-Kamegai could be a good fight, though Guerrero is on paper on another level. Don't ignore that this is at the StubHub Center which is probably our most magical and charmed fight venue. Alexander-Soto Karass could go either way as a style clash, and Lomachenko-Russell is what most diehard fans are going to be tuning in to see first and foremost. BLH will have live coverage.