Chris Algieri's win over Ruslan Provodnikov was both an upset and a comeback effort last night. How did the judges see him winning the fight?

Last night on HBO Boxing After Dark, Chris Algieri pulled an upset over Ruslan Provodnikov, winning an entertaining and debatable (but not really controversial) split decision to stay unbeaten and claim the WBO junior welterweight title.

It was a rare sort of fight from a scoring perspective, as there are very good arguments for either man to have won, and by pretty clear margins, at that. Judge Max DeLuca had it 117-109 for Provodnikov, while judges Tom Schreck and Don Trella scored the fight 114-112 for Algieri. BLH had it 114-112 for Algieri, while HBO's Steve Weisfeld had it 117-109 for Provodnikov. Fan/media/fighter scores on Twitter were all over the place, some with Provodnikov well ahead, some with Algieri winning the majority of the rounds and overcoming a three-point deficit from round one, made possible by Provodnikov scoring a pair of knockdowns.

Here are the cards from Brooklyn: 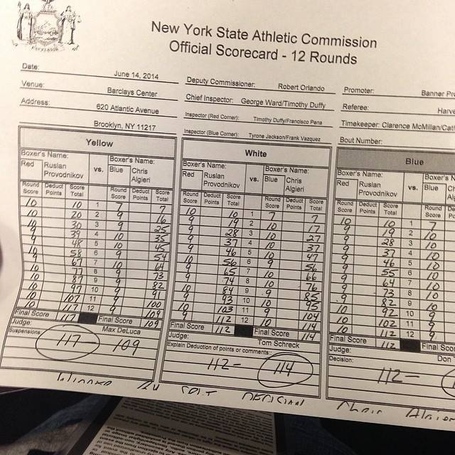 All three judges scored the first round 10-7 for Provodnikov, as they should have. Neither of the knockdowns were flash jobs or anything like that. The first was on a brutal left hook that dropped Algieri (20-0, 8 KO) like a rock, the second was Algieri taking a knee to avoid any more big shots coming in. With hindsight, that may have been the best decision he made all night. It got him a breather instead of potentially crushed by another big blow that could have ended the fight in round one.

And what's remarkable about this is that I think all of these are totally legitimate scores. Like it or not, there is no way to stop judges -- professionals, amateurs, veterans, novices, fans, fighters, trained, or untrained -- from having some sort of preference for what they like to see. Provodnikov had the edge in punishment dished out, closing Algieri's eye over the course of the fight, a process that began with that big hook in round one. Algieri, meanwhile, threw more, landed more, and dictated the tempo of the majority of the fight, at least in my eyes. It was a hard-fought battle on both sides, and someone had to lose.

Who did you score the fight for last night? Did Provodnikov's power dominate your view of the fight, or did Algieri's boxing win the night after the bad start?