PPV (AUS / NZ), 3:00 am EDT, Super 8 Heavyweight Tournament: Hasim Rahman vs Anthony Nansen, Kali Meehan vs Hunter Sam, Martin Rogan vs Michael Sprott, Alonzo Butler vs Brice Ritani-Coe. As you can see by the banner, Samuel Peter was supposed to be here. He's not. Peter was set to face Hasim Rahman, but instead Rahman will face Nansen, a novice with a 3-2 career record. Johnathon Banks was sent an offer for this tournament. He declined. This 8 is truly super.

FOX Sports 1, 9:00 pm EDT, Emanuel Gonzalez vs Tevin Farmer, Alexis Santos vs Daniel Martz, Jamie Kavanagh vs Michael Clark. Standard FS1 card. When you take a look at this partnership between FS1 and Golden Boy Promotions, you can really understand how Richard Schaefer might truly believe that Adrien Broner vs Carlos Molina is a main event level fight.

ESPN2, 9:00 pm EDT, Yudel Jhonson vs Norberto Gonzalez, Sammy Vasquez Jr vs Jay Krupp. Vasquez is the Iron Mike Productions prospect to keep an eye on, it would seem. Iron Mike is now firmly in the mix for the FNF rotation. BLH will have live coverage, split with ShoBox.

SHO, 10:00 pm EDT, Hugo Centeno Jr vs Gerardo Ibarra, Eddie Gomez vs Francisco Santana. This was originally supposed to be Centeno facing the mighty DOLTON, future intergalactic champion and PPV superstar, but DOLTON had to pull out due to injury. BLH will have live coverage, split with FNF.

BoxNation (UK), 2:00 pm EDT, Stuart Hall vs Paul Butler, Jon-Lewis Dickinson vs Ovill McKenzie, Bradley Saunders vs Ville Piispanen. Hall-Butler is another "world title fight" for Hall. The rest of the card is about normal mid-level Warren stuff these days. BLH will have live coverage, split with the ARD show.

ARD (DEU), 5:10 pm EDT, Juergen Braehmer vs Roberto Bolonti, Cecilia Braekhus vs Jessica Balogun, David Price vs Yaroslav Zavorotnyi. Here's another of Braehmer's "world title fights." Braehmer is as paper a "champion" as they come, but that's not saying he can't fight. He's a good fighter. But whatever. Braekhus is the REAL star here, because I am very smart. David Price is being handled with kid gloves for a while, and Sauerland is AWESOME at that, so signing with them once Maloney retired was a good move. BLH will have live coverage, split with the BoxNation show.

HBO PPV / BoxNation (UK), 9:00 pm EDT, Miguel Cotto vs Sergio Martinez, Wilfredo Vazquez Jr vs Marvin Sonsona (rematch), Andy Lee vs John Jackson, Jorge Melendez vs Javier Maciel. Here's the card we're focusing on this week, obviously. The undercard is half a travesty, though there could be some action, and Maciel replacing Yuri Foreman against Melendez raises the hopes for good if not particularly significant fights. The most promising potential fighter on the undercard is Marvin Sonsona, or maybe John Jackson. Everyone else is a known quantity and below true top level. The main event is 100% of the reason to buy this show, but it's a great main event. BLH will have live coverage. 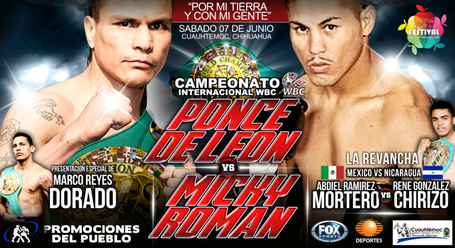 Televisa (MEX), 11:00 pm EDT, Daniel Ponce De Leon vs Mickey Roman, Abdiel Ramirez vs Rene Gonzalez. Ponce De Leon vs Roman could be a barnburner, or someone could get knocked out in three rounds. You just never know. It's crazy out there, man. Trying to predict the future? Don't even bother. Life is about living.