Robert Guerrero won a war with Yoshihiro Kamegai, and didn't escape unscathed in his first fight in 13 months. He was pretty scathed, in fact.

Share All sharing options for: Photo: Robert Guerrero wins, but leaves with a badly damaged eye

Another week, another exciting boxing main event, and another winner of that main event left with a jacked up eye. Last week, it was Chris Algieri, who upset Ruslan Provodnikov despite his eye being damaged in round one, and this week, it was Robert Guerrero, who went toe-to-toe with Yoshihiro Kamegai and got the duke despite fighting one-eyed for much of the night.

Check out Guerrero in the post-fight interview: 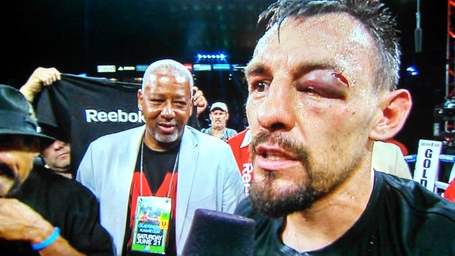 Guerrero (32-2-1, 18 KO) and Kamegai (24-2-1, 21 KO) fought in the proverbial phone booth in a Fight of the Year contender on Showtime, with Guerrero getting an unanimous decision victory in his return to the ring after 13 months off. Guerrero said he felt a little rusty once the fight was underway, but he certainly put on another tremendous fight against the iron-willed Kamegai, who was a little overmatched but fought his ass off to make it an exciting night at the StubHub Center.