Terence Crawford faces Yuriorkis Gamboa in the week's biggest fight, while Ricky Burns returns in Scotland looking for a win with a new trainer. 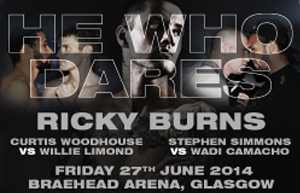 Sky Sports 3 (UK), 3:00 pm EDT, Ricky Burns vs Dejan Zlaticanin, Curtis Woodhouse vs Willie Limond, Stephen Simmons vs Wadi Camacho. Burns is returning from a loss to Terence Crawford, and a draw that should have been a loss against Ray Beltran, with a new trainer and a spot on a Friday on Sky Sports 3. Zlaticanin is an unbeaten fighter who does have a 12-round win over recent FNF standout and Boxcino tournament winner Petr Petrov on his record, so he may not be a pushover, though we'll have to wait and see, really. Woodhouse-Limond is for both the British and Commonwealth titles at 140. BLH will have live coverage.

ESPN2, 9:00 pm EDT, Ivan Redkach vs Sergey Gulyakevich, Ryan Kielczewski vs Ramsey Luna. Redkach was last seen in January, beating Tony Luis, while Gulyakevich is an 11-year pro who has mostly fought in his native Belarus and Latvia over his career. Ramsey Luna was the winner of the famed Luna-Luna double pro debut swing fight of 2010. BLH will have live coverage.

SHO, 9:25 pm EDT, Dominic Wade vs Nick Brinson, Errol Spence vs Ronald Cruz, Marcus Browne vs Yusaf Mack. This is a pretty nice triple-header for ShoBox, as Wade-Brinson is evenly matched on paper, while 2012 Olympians and unbeaten pro prospects Spence and Browne take steps up against known veterans in Cruz and Mack. BLH will have live coverage.

HBO, 10:00 pm EDT, Terence Crawford vs Yuriorkis Gamboa, Matt Korobov vs Jose Uzcategui. Crawford-Gamboa is a hell of an interesting fight on paper, as both of them have the goods in terms of talent, and a lot of it may come down to Gamboa's rustiness after a year off and only two fights since 2011, and whether or not the Cuban can really fight at 135. Crawford can. Korobov-Uzcategui is a "who knows?" matchup at middleweight, but Korobov was once a hyped prospect, and he's still unbeaten, while Uzcategui is looking to make his name now. BLH will have live coverage. 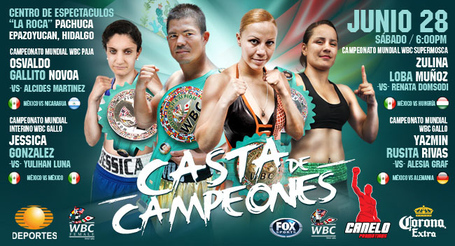