Golovkin vs Geale official for July 26 on HBO at MSG

Gennady Golovkin will headline for the first time at Madison Square Garden on July 26, facing Daniel Geale for the WBA middleweight title on HBO.

Share All sharing options for: Golovkin vs Geale official for July 26 on HBO at MSG

HBO World Championship Boxing will return to Madison Square Garden on July 26, with an event headlined by WBA middleweight champ Gennady Golovkin taking on former WBA and IBF titleholder Daniel Geale in a fight set, of course, for 12 rounds.

Golovkin (29-0, 26 KO) was first likely to face Andy Lee on April 26, but that idea was scrapped in February when Gennady's father passed away, and he took time off for the traditional Ukrainian mourning period. There were then negotiations for Golovkin to move up to 168 pounds and face Julio Cesar Chavez Jr in a pay-per-view fight, but Chavez and Top Rank couldn't come to an agreement, and that idea was also tossed aside.

That led to Golovkin securing the July 26 date, and then a whole lot of other things came together, or however you might suspect it happened. Geale (30-2, 16 KO) was set to face Matthew Macklin on May 24 on HBO, but that entire card was canceled when heavyweight main eventer Mike Perez pulled out.

Interestingly -- or however you might put it -- Perez (a K2 fighter) was to face Bryant Jennings (a Gary Shaw fighter), and that will also be taking place on July 26, when Golovkin (K2) faces Geale (Shaw) in the main event. Macklin was quite open with his suspicions on Twitter, but It Is What It Is, as they say. Them.

Golovkin has fought at MSG before, but not in the main arena.

"Since his HBO debut less than two years ago, Gennady has become the hottest international star in boxing and we're thrilled to promote his return to Madison Square Garden, the premier venue for boxing," said Tom Loeffler, Managing Director of K2 Promotions. "This will be Gennady's first fight in the main arena at Madison Square Garden, where only a select few could headline today."

"I'm happy to be fighting at Madison Square Garden once again. Fighting in front of the great fans in New York City for the third time is an honor for me and I will train hard to defend my titles in style by giving the fans an exciting show," said Golovkin. "Daniel Geale has a lot of world championship experience, is a big international name and I look forward to this challenge."

Geale will be the major underdog, but he and his promoter Gary Shaw are expressing confidence. (Not that they wouldn't be, but y'know.)

"I'm pleased to be making my way back to HBO against Gennady Golovkin, a fighter who everyone thinks is invincible," said Geale. "A victory will get me back to where I want to be. The people of Australia believe in me and that's what drives me, my countrymen. I want to show them they have a great champion. On July 26th the world will see me back on top."

"Daniel Geale is a throwback fighter who has never backed down from a tough challenge and his mindset is no different going into the Golovkin fight," said Gary Shaw. "GGG" is considered the top dog in the middleweight division by those in the business, but I believe Geale is the best. We will see how Golovkin fares against someone on his level. I have confidence Geale will come out on top."

Here's the early HBO poster for the fight: 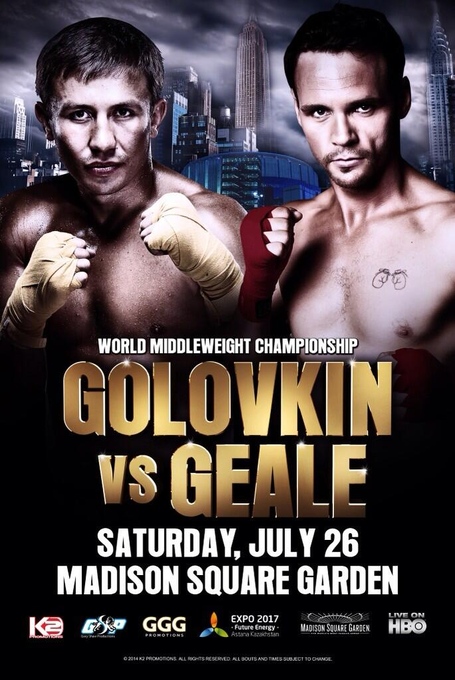