Floyd Mayweather's rematch with Marcos Maidana is official for September 13, and the poster art has been released.

The September 13 rematch between WBC and WBA welterweight champion Floyd Mayweather and Marcos Maidana has a title and an official poster already. The first fight on May 3, a competitive and exciting win for Mayweather, was called "The Moment." The rematch has been dubbed "Mayhem," and will once again take place at the MGM Grand in Las Vegas, on Showtime pay-per-view. 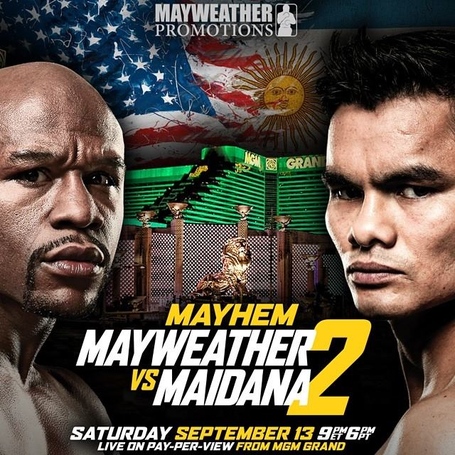 Mayweather (46-0, 26 KO) won a majority decision over Maidana (35-4, 31 KO) in their first fight, taking scores of 116-112 and 117-111, with the third card showing a draw, 114-114. Most observers felt Mayweather did win pretty clean and clear, but Maidana definitely gave Floyd some matchup issues with constant pressure, an ability to use some roughhouse tactics that absolutely bothered Mayweather and cut him for the first time ever, and overall, just a sense that he wasn't overmatched, as most seemed to expect heading into the fight.

Mayweather, 37, said after the fight that he could have made it easier, but chose to make it exciting "for the fans." It will be on Mayweather to prove that he does have the legs to stay out of range against Maidana, 30, and prove, too, that he's not simply getting old, even if Mayweather "getting old" still means he's better than everyone else out there.

Do you think Mayweather will make the adjustments and have an easier night this time? Even if his legs are starting to go on him, he remains an incredibly intelligent fighter who certainly learned what Maidana is capable of, and if he did underestimate him, he won't this time around. Can Maidana win, or did he do about as well as he possibly can in May?