Tyson Fury and Dereck Chisora meet in a rematch in the United Kingdom, while Gennady Golovkin headlines in New York against Daniel Geale.

ESPN2, 9:00 pm EDT, Roberto Garcia vs Breidis Prescott, Caleb Truax vs Derek Ennis, Notre Dame Subway vs Paul Gonsalves. Garcia-Prescott is a decent FNF main event, while Truax-Ennis is a decent FNF co-feature. All of those guys have some talent, most of them thus far proving in their careers that it's probably below the top level. And then there's Mike Lee, who went to Notre Dame and has done commercials for Subway. BLH will have live coverage.

SHO, 10:00 pm EDT, Antoine Douglas vs Michel Soro, Jerry Odom vs Vilier Quinonez, Wanzell Ellison vs Tony Luis, Cecil McCalla vs Oscar Godoy. It's a QUADRUPLE-HEADER on ShoBox: The New Generation! QUADRUPLE! That means FOUR FIGHTS! FOUR! FOUR OF THEM! All feature prospects of varying quality on paper. BLH will have live coverage.

FOX Sports 1, 11:00 pm EDT, Frankie Gomez vs Vernon Paris, Ivan Morales vs Sergio Frias, Terrell Gausha vs Ronnie Warrior Jr. This could be a tricky fight for Gomez, as Paris may have gotten smoked by Zab Judah, but is an awkward, talented fighter when he's at his best, and could present some stylistic problems. Or he might get smashed. Morales and Gausha are legit prospects. BLH will have live coverage.

AWE / BoxNation (UK), 3:30 pm EDT, Dereck Chisora vs Tyson Fury II, Billy Joe Saunders vs Emanuele Blandamura, Terry Flanagan vs Martin Gethin, Liam Smith vs Jason Welborn, Chris Eubank Jr vs Ivan Jukic. Easily the biggest fight this week, as Chisora looks to quiet the unbeaten Fury and get a measure of revenge for his 2010 loss to Fury. The revenge would almost be more on himself for being so out of shape that first time around. Fury has gotten better since then, and so has Chisora, and neither of these guys are particularly shy about mixing it up. This is the sort of fight that bookies should try to bait people into betting on a DQ or no-contest. BLH will have live coverage.

SAT1 (DEU), 4:15 pm EDT, Robert Stieglitz vs Sergey Khomitsky, Robin Krasniqi vs Oleksandr Cherviak, Christina Hammer vs Anne Sophie Mathis, Dominic Boesel vs Daniel Regi. Stieglitz is looking to get his career pointed back in the right direction, but Khomitsky is no pushover, either. He's a very, very tough gatekeeper type who has given Martin Murray a hard night and "upset" Frank Buglioni. The rest of the card is typical German fare with Krasniqi fluffing his record futher, but Hammer-Mathis is a nice matchup, I think.

HBO / Main Event PPV (AUS) / Sport1 (HUN), 9:30 pm EDT, Gennady Golovkin vs Daniel Geale, Bryant Jennings vs Mike Perez. This is about as good a fight as is out there for Golovkin right now, so hey, that's great. There is the feeling that even though Geale's a good fighter, he has the sort of style that will get chewed up by Golovkin. Jennings-Perez is a heavyweight fight to determine a WBC contender, which is, like, the 2nd or 8th mandatory or whatever they're doing. BLH will have live coverage. 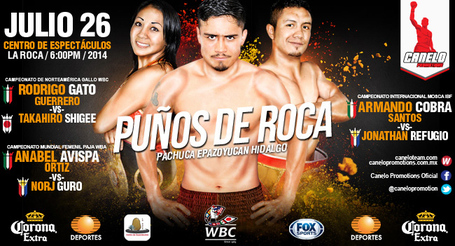